In a city that embraces Jazz Fest, sidewalk buskers and brass bands any time of year, ReStrung Jewelry, the brainchild of local artist Naomi Celestin, has struck a chord with music- and jewelry-loving New Orleanians and beyond.

A clever idea to recycle and repurpose used guitar strings has helped ReStrung Jewelry grow to include hundreds of retailers nationwide since launching in 2011. Online retailers currently include Uncommon Goods and Let It Shine; the company’s national outlet is the House of Blues, along with more than 500 retailers from Alabama to Wyoming and Canada. ReStrung uses social media in an innovative way and has a business model that embraces philanthropy both locally and in its sister location in Puerto Rico.

“We are still a pretty small business, but we generate anywhere from $20,000 to $60,000 per month,” says Celestin. “It really fluctuates depending on the season and what shows we are doing.” She adds that the majority of the company’s revenue comes from its wholesale business, which has grown to include hundreds of retailers nationwide. “We also sell six nights a week at Palace Art Market,” she said.

Celestin, the company’s founder and “chief visionary officer,” earned a minor in metalwork in college. She says she launched Restrung after a light-bulb moment at a music club.

“I got the idea to make pieces with old guitar strings,” she said. “I figured, performers just throw these away, so why not repurpose them into wearable art?”

Celestin said the whole venture started very simply. “In the beginning, I thought it would be a fun side hustle, and I spent many nights at shows in NOLA, waiting for musicians to take breaks so I could ask them to save strings for me. The music community was so supportive, and they helped spread the word to get more strings donated.”

Celestin soon launched the company with a local market location and hasn’t looked back since.

“In April of 2012, I got accepted to sell at The French Market, and that’s when things really took off,” she said. “In a few short months, I was working every day, and I realized I had a good thing happening, and so I shut down my graphic design business and devoted myself to building ReStrung into a business. It was a risk, making that kind of change, but I had a good feeling and I loved doing it, so I took the plunge and I’ve never regretted it.”

Musicians from around the world donate their strings to ReStrung. That, along with contributions from manufacturers outside New Orleans, provide Celestin with a majority of her raw materials. Jewelry pieces are fashion forward and affordable, ranging in price from $20 to $60.

“It’s fun to receive those packages [of strings] and read the stories that come with them,” Celestin said, noting one story in particular. “A few years ago, the president of Sfarzo Strings, one of the largest string manufacturers in the U.S., was vacationing in New Orleans and he happened upon our booth at The French Market. He offered to donate their factory second strings, and we now get a 10- to 12-pound box of strings sent from them each month. That’s a lot of strings that would otherwise get scrapped, but for us it’s like getting a box of gold.”

Celestin relies on a tight-knit team of professionals and artists at ReStrung, with an emphasis on providing leadership roles and productive employment for women.

“It pretty much grew organically,” she said. “I had no idea what I was doing from a business perspective, no real plan, no background in the accessories industry. I just enjoyed making jewelry and knew I wanted to keep doing it. After about six months of making jewelry for 40-plus hours a week and then selling out on weekends at the French Market, I knew I needed help. About six years ago, I contracted with our first sales rep, Tara Rodgers, who happened to have a background in jewelry production. Tara is still with us, making jewelry from home while raising her daughter.”

Expansion would come next for the business, and Celestin found a dedicated and motivated resource of workers, with everyone learning as they went along.

“I began thinking of expanding to other retail markets, and I was also getting more interest from wholesale customers, which meant we would need more help to keep up with everything. I hired stay-at-home moms, and several musicians and performers who needed extra work in between performing. Before I knew it, I had a fledgling company on my hands — and a lot to learn. Today, I’m proud to say that we have a diverse team of a dozen women who are all so talented and good at what they do. I’m immeasurably grateful for each and every member of our ReStrung krewe.”

Headquartered in New Orleans, with administration offices and a studio located in the Bywater, ReStrung Jewelry recently established a satellite office in Rincon, Puerto Rico.

“I wanted to keep everything handmade by women in the U.S., and about a year and a half ago, I took a trip to Puerto Rico,” she said. “I fell in love with Rincon, and met several jewelry makers there. Rincon is a surfing town, where work is seasonal, and so the women I met were very interested in working with us. I rented a place and came home with plans to start a production team there ASAP. A few weeks later, Hurricane Maria devastated the island. The storm derailed our plans for months, but as a New Orleans native, I’ve been through my share of storms, and I knew how much the island would need help. Maybe it’s a little crazy to run two operations in hurricane zones, but that’s what we are doing. Hurricane Maria brought back so many memories from Katrina, but it also bolstered my resolve to work with these women, and we now have a growing team of production assistants there, as well as my daughter who moved there full-time in January.”

It’s Celstin’s attitude of reaching out that is ReStrung’s other main business mantra – creating a beautiful, recycled and repurposed piece of jewelry while also providing work to artists and contributing funds to local community projects. The company’s main initiative is with the New Orleans Musicians’ Assistance Foundation, which supports the New Orleans Musicians’ Clinic efforts to provide health and wellness to local musicians. Five percent of the company’s profits are donated to these efforts annually.

“[Our efforts] mean making a difference in the communities that we care about,” Celestin said. “From the start, I decided to donate a portion of our profits to the New Orleans Musicians Clinic, as they have helped so many of my friends through the years. Music is the heartbeat of New Orleans, and NOMC keeps our musicians healthy and performing. We also donate to the Roots of Music, an organization that works with inner-city youth, training future generations of musicians. Our mission is ‘Be Kind. Do Good. Have Fun,’ and donating to these worthy causes helps us fulfill that mission.”

Celestin has big plans for ReStrung, with new lines on the way to expand her customer base.

“Our fan base is widespread, from millennial trendsetters to hip moms who love music, fun fashion and eco-friendly jewelry with a worldly boho aesthetic,” she said. “In the upcoming months, we will be launching new product lines that tie into our Louisiana and Caribbean connections, including sustainably sourced materials, as well as a men’s collection and a signature line of one-of-a-kind pieces. It is my personal vision to continue building our brand as a woman-owned and operated company that does good work and gives back to the community, and I’m grateful each day that I get to do what I love while helping others.” 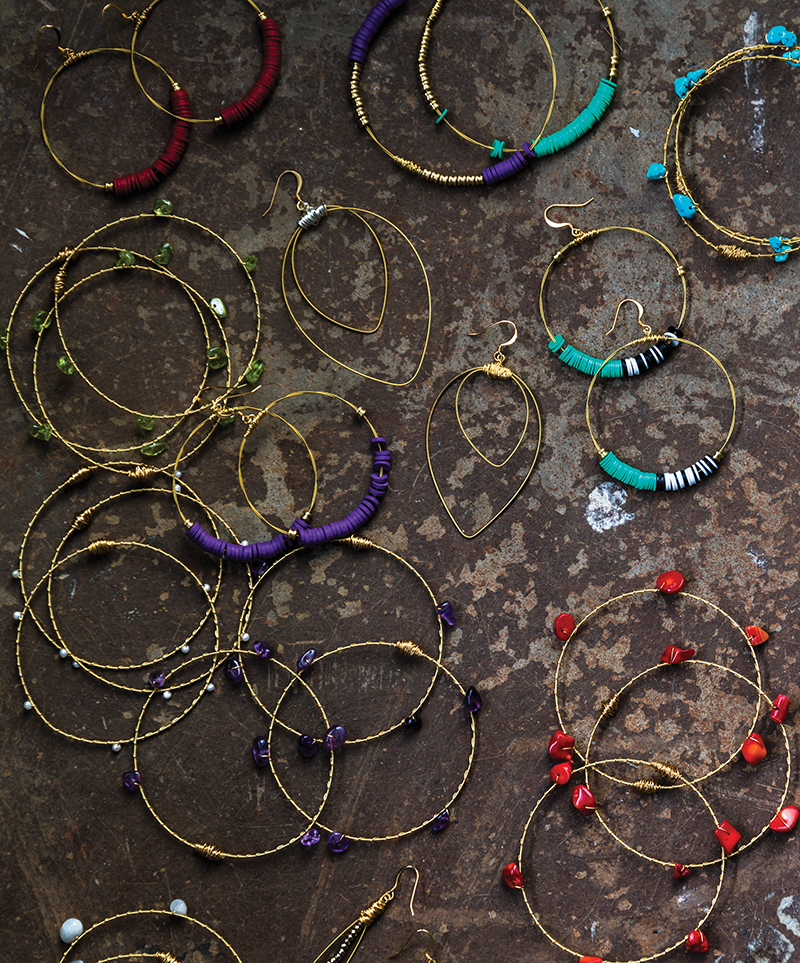 Recycled strings are donated from musicians around the world, making the company a truly green-friendly enterprise. 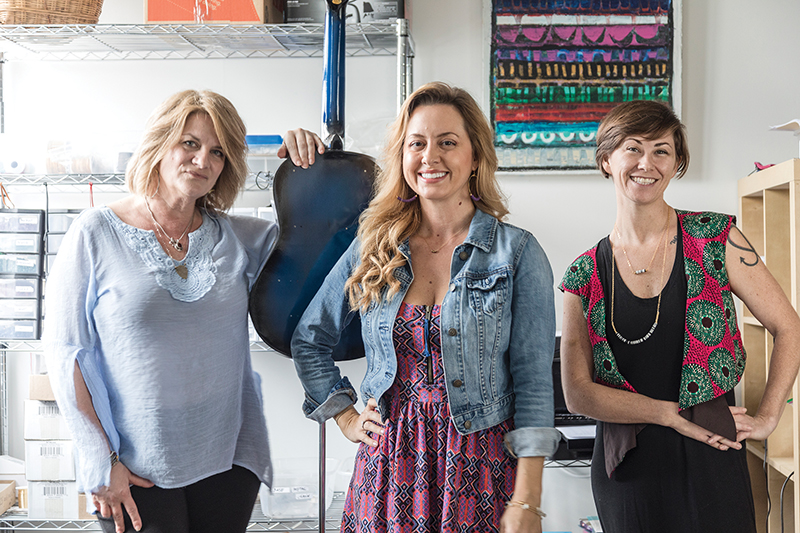 ReStrung Jewelry is comprised of a tight-knit team of professionals and artists, with an emphasis on providing leadership roles and productive employment for women in both New Orleans and the company’s new satellite location in Puerto Rico.

A Day in the Life of Naomi Celestin

“As much as I’d love to spend all day creating new pieces, the business of running a business often takes precedence. On a typical day, I’m managing our social media and marketing work, including designing our catalogs and organizing photo shoots. I might also be looking into new systems for CRM and checking pieces for quality control (very un-artistic pursuits, but necessary for growth). The bulk of my time this past year has been devoted to developing and training our team in Puerto Rico. I also coordinate the industry shows at our permanent showrooms in Las Vegas and Atlanta four times a year. That’s a lot of work, but a lot of fun, as the shows force me to push myself creatively to design new collections each season.”

Other New Orleans Products (and Gifts!) That Give Back

This trendy French Quarter boutique run by and for women showcases female artists and 10 percent of profits are donated to the Heymann Foundation, which provides assistance to South Louisiana residents through a variety of “diversified social programs.”

Fun designer socks inspired by South Louisiana, with themes such as “Mardi Gras,” “Oyster,” “Jazz,” and “Gator.” For each pair of socks purchased, another pair is donated to a shelter or organization that works to provide resources to homeless individuals.

Designed in New Orleans and handcrafted in Lesotho, Bow Shoeshoe is a line of stylish bow ties with proceeds going to empower villages and educate workers while providing a clean source of income for men and women.

This carefully curated boutique shop provides eco-friendly, made-in-America products and gifts such as cards, bath products, linens and more. Ten percent of profits are returned to partner causes around the world to support community health.