Former Saints quarterback Drew Brees discusses his latest venture, how he chooses to invest in businesses, and how he’s staying involved in the business of football. 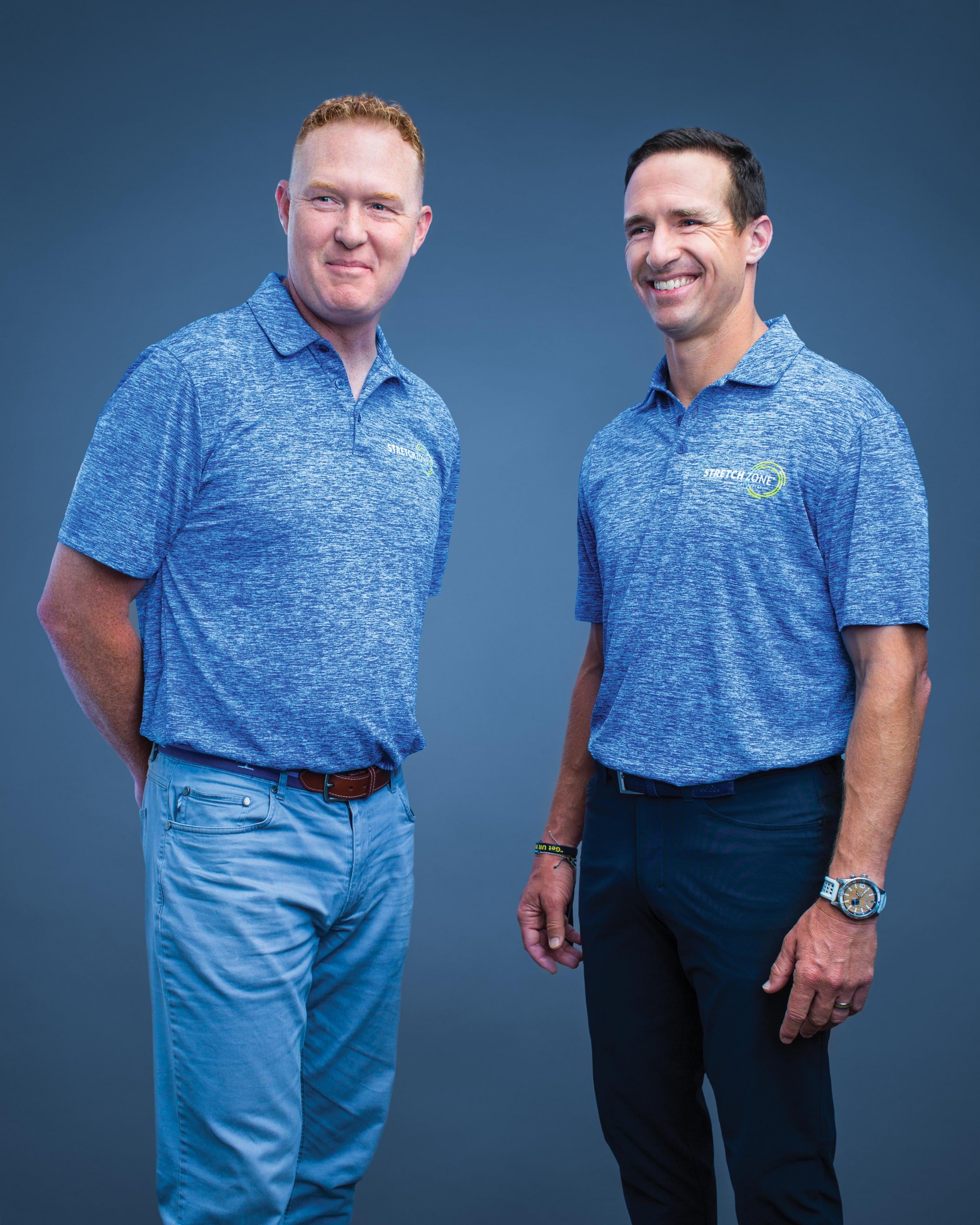 We are a compliment to any fitness regimen you want to try to maintain. It’s designed to fit the needs of whomever – male, female – no matter your age or what you’re trying to accomplish. Bottom line is there’s something for everyone. Drew Brees

Drew Brees was a National Football League anomaly. At just 6 feet tall and 209 pounds, he was well smaller than the prototypical NFL quarterback’s height and weight — 6 feet, 4 inches, 225 pounds. Add in a perceived lack of arm strength and several injuries that were once considered career-ending – including a torn knee ligament in high school; a torn labrum and twice damaged rotator cuff in his throwing shoulder; a torn ligament in the thumb of his throwing hand; a torn fascia in his foot; 11 broken ribs and a punctured lung — and it’s astonishing to think that he not only played 20 NFL seasons, but is considered one of the greatest to ever play the game and is roundly expected to be a first-ballot Hall of Fame inductee when he becomes eligible in five years.

Stretching, Brees says, helped him remain healthy, reduce injuries and recovery time, and lengthen his playing career to two decades. Those same benefits, he says, can be applied not just to professional athletes, but those looking to improve their performance, recover from an injury, or simply feel better. And he’s putting his money where his mouth is. Now, “retired” at 42, Brees has partnered with two friends from his days at Purdue University (Jason Loerzel and Ben Smith)to bring a new venture to New Orleans — a national franchise called Stretch Zone, a fitness concept aimed at helping people gain or maintain their body’s range of motion and flexibility through a patented, practitioner-assisted stretching program. The first New Orleans store opened June 14 in Uptown, a Metairie location is planned for this month, and leases are being negotiated for further local expansion.

Stretch Zone
Stretch Zone was founded in 2004, but its roots date back to 1999. Founder Jorden Gold’s grandfather lost much of his mobility due to diabetes, but he set a goal to dance at a family wedding. Gold used his healthcare background to develop a practitioner-assisted, strap-based stretching method to help his grandfather get out of his wheelchair and celebrate on the dancefloor.

Recognizing the quality-of-life impact and number of those facing mobility issues, Gold began developing a proprietary table-based strapping system that positions, stabilizes, and targets muscles to achieve a deeper, more advanced stretch than one can get on their own. He soon began working with professional athletes and NFL and NBA teams to help players increase and maintain range of motion, enhance athletic performance, and relieve muscle and joint stiffness and soreness. Realizing he could expand on his concept, he opened the first Stretch Zone corporate store in Fort Lauderdale, Florida, in March 2015 and formed Stretch Zone Franchising later that year.

“We’re in the business of reeducating the muscle reflex, allowing you to move easier,” he said. “This re-education of the associated muscle reflex lends to movement becoming more efficient and effortless in all ranges and planes of motion.”

Stretch Zone President and CEO Tony Zaccario said each session provides a tailored experience based on the consumer’s needs.

“We design programs that are unique to the person so they can achieve whatever goals they might have,” Zaccario said. “Sometimes it’s playing a full round of golf without back pain and for others, it’s really just sleeping through the night.”

Brees discovered Stretch Zone while in San Diego last offseason. He accepted their offer of a free 30-minute session, immediately felt the benefits, and began exploring their business model. Learning the company was looking to expand, he joined as a franchisee, board member and brand ambassador, and, together with Loerzel and Smith, is in plans to open stretching studios in New Orleans, Southern California, and across the Midwest.

“This was the stretching methodology that I used during the latter part of my career to supplement what I was doing on the training side,” Brees said. “Typically, I would train, and then I would go get stretched. At the end of training your muscles contract and stretching really lengthens you out. I felt like there was a huge benefit. It really helps me maximize my workout.

“It’s probably one of the most important parts of your training regimen that goes unnoticed and unattended to,” he said. “Power is strength plus mobility. If you’re really strong, but you’re not flexible, you’re really not able to generate a lot of power. But if you’re strong and you have flexibility to go along with that, that equates to power. So, for me, especially as I was getting older and I had to work harder to maintain my body and to take care of myself, what it became about was, ‘How can I maximize my power to play the game right?’ You look for every edge possible. And this was a great part of my training regime, especially as I got older.”

“We are a complement to any fitness regimen you want to try to maintain,” he said. “It’s designed to fit the needs of whomever — male, female — no matter your age or what you’re trying to accomplish. Bottom line is there’s something for everyone. Whether you’re an athlete, a weekend warrior, somebody who’s just getting a little bit older and because of the aging process has some aches and pains, maybe some injuries, and lost mobility or range of motion or the ability to do some of the things they love to do. This can get it back.”

One of the main benefits of utilizing Stretch Zone, Brees says, is that the practitioner conducts the stretching session.

“I mean, there’s times where people just say, ‘Gosh, I don’t feel like working out today.’ Right? ‘But I want to feel active. I want to feel like I did something good for my body,’ and this is a great way to accomplish that. You get to lie on the table, they do all the work, and you get up feeling great.”

Brees in Business
With a solid reputation for being as good a person off the field as a player on it, companies have naturally flocked to Brees to invest in and/or be a spokesman for their brands. While the affable QB was gathering stats on the field, he used his degree in industrial management, along with the millions of dollars he made as a player, to build a diversified business portfolio.

Brees currently owns several Jimmy John’s sandwich shops and is a partner in Walk-On’s Bistreaux & Bar, Happy’s Irish Pub, and fast-food burger restaurant Smalls Sliders. He has an equity stake in Title Boxing Club and food delivery service Waitr. Additionally, he has served as spokesman or appeared in commercials for AdvoCare International, Nike, Microsoft, PepsiCo, Procter & Gamble, Verizon and Wrangler Jeans. Earlier this year, he joined the board of directors for Baton Rouge-based b1Bank and its parent company, Business First Bancshares, which has 43 locations across Louisiana and Texas, with local branches in Metairie and Covington. In July, he partnered with online sportsbook PointsBet and will serve as a brand ambassador starring in advertisements, hosting watch parties, and helping with promotions.

Stretch Zone has 126 locations in 27 states and is hoping to eclipse 200 studios by the end of the year. Bringing on a guy with Brees’ recognizability has been “huge for the brand” as they expand, Zaccario said.

“First and foremost, his character just surpasses everything we could imagine,” he said. “His core values obviously align with that of the company’s and what we’re trying to do. He has a strong business acumen. He has a heavy franchise background and wants to get down to the unit level. He brings all that to the table with him as a franchise partner, board member, and, obviously, brand ambassador.

“We’re tracking well; Q3, Q4 is sizing up nicely. Now that COVID-19 is going into the rear-view mirror, a lot of municipalities that maybe were tied up in certain markets are getting much easier to get back into now.”

Loerzel said the New Orleans store has been booming since it opened June 14.

“We’re about three weeks booked out now, and we’re trying to hire more people, good, qualified candidates to be trained and to provide this service,” he said, noting that employees receive training on Stretch Zone techniques. “We’re trying to open up our Metairie store in August. The construction is moving just fine, but it all depends on how the hiring situation goes. We’re also actively working on other locations, but the leases are not final just yet.”

Choosing to Invest
When looking at business opportunities, Brees says he tends to gravitate toward businesses that have already made it through the difficult part of getting started and making the mistakes that come with starting new ventures.

“I’ve always loved franchising,” Brees said. “I feel like you’re taking an established business model, and you’re providing someone with the opportunity to own their own business. It’s hard to own your own business, to come up with your own idea and your own set of systems and processes. That’s a really difficult thing to do. Franchising, especially when you find a good one, provides a great support system and processes that put you in a position to succeed.”

Before handing over money, he says he looks for key components in a business investment.

“I want to see great leadership,” he said. “I want to see great unit economics. Obviously, there is the balance between the cost of opening up a store, your ability to be profitable, your ability to hire and train and give people opportunities to succeed within the framework of your business. And, finally, I want something that I think feels authentic, has a great concept and a great methodology.”

Additionally, he seems to lean on the familiar. He has gone into multiple partnerships with Walk-On’s founder Brandon Landry, and Stretch Zone is only the latest of multiple investments he has with former Purdue teammates. He played college football with Carl Buergler, Jimmy John’s director of operations.

“Ben and I have known Drew since our first days at Purdue,” Loerzel said. “We always had an idea in our minds that we wanted to kind of jump into some things together. I found this company, brought it to Drew and Ben, and we decided it was a great thing to jump into. Drew said, ‘All right, I’m going to show you all the franchising world. This is how it works. This is what we do. So, he’s showing us the ropes, and we’re learning on our feet.”

Primetime Play Calling
While Brees has hung up his helmet and shoulder pads, he’s not walking away from football completely. On Saturdays this fall he will be in the broadcast booth as color analyst for NBC’s national broadcast of Notre Dame football games. On Sundays, he’ll be an analyst on NBC’s “Football Night in America.”

“I’ll be calling Notre Dame games with Mike Tirico and then will be in-studio on Sundays doing the pregame and halftime show alongside Mike and Tony Dungy,” he said. “It’s an opportunity to work with one of the best groups in the business and stay very closely connected to the game. I’ll have a little bit of a learning curve, but it’s the opportunity to basically play the game from the broadcast booth, talk about it, anticipate what’s to come, and try to create a great experience for the fan that’s a lot of fun and where they feel like they’re learning a lot.”