STRENGTHENING AND FORTIFYING THE MARITIME INDUSTRY

When trying to articulate the impact the U.S. Army Corps of Engineers has on the overall health and vigor of our maritime economy, numbers speak louder than words.

“The Corps’ mission is to deliver vital public and military engineering services — partnering in peace and war to strengthen our Nation’s security, energize the economy and reduce risks from disaster,” says Corps Public Affairs Officer Rene Poche. “(It’s) made up of 37,000 civilian and military personnel, making it one of the world’s largest public engineering, design and construction management agencies.”

Though not created solely for this purpose, the Corps, since its inception, essentially sets the stage for the country’s maritime industry to flourish. This is accomplished in a myriad of ways, from geographic-specific projects (a close-to-home example being regular dredging of the lower Mississippi River to allow larger vessels safe passage), to maintenance and improvement of Corps-created projects (such as the locks system of the upper Mississippi River — the main artery of agricultural maritime commerce). 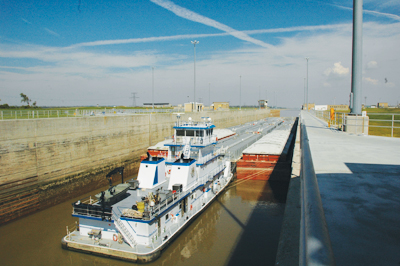 “The Corps is responsible for operating and maintaining federally authorized navigation channels for the safe and efficient transit of maritime traffic,” says Vic Landry, the Corps’ Operations Manager. “It is a much more cost efficient to move commodities via water than rail or truck, so this reduces impacts to the public on highways. The oil, gas and chemical industries are reliant on navigation for moving their products to market, and we have many refineries located on the Mississippi River corridor.”

There are two main ways in which the Corps assists (well, more than assists) in keeping waterway commerce a desirable option for businesses — operating the lock system of the upper Mississippi River, and dredging portions of the lower Mississippi River.

The northern portion of the Mississippi River runs right through the heart of America’s breadbasket – states like Minnesota, Iowa, Illinois and Missouri. These states produce a large share of U.S. agricultural exports, namely corn, wheat, soy, various grains and beans. But getting those products to deep-draft ports in Louisiana via the Mississippi River wouldn’t be possible without the intricate lock system the Army Corps created in the 1930s. Consisting of 29 locks – all located in the upper half of the Mississippi River – this “Stairway of Water” maintains a nine-foot channel on the river from the Minnesota Twin Cities to St. Louis.

The Corps operates all Mississippi River locks and in recent years (thanks to additional federal funding) has begun to make repairs and improvements to the existing locks and dams infrastructure.

South of St. Louis, the Corps’ efforts along the Mississippi River focus mainly on dredging – clearing out sediment build up that occurs naturally from minerals flowing downstream so that navigation channels can still be used safely.

Down here, most dredging is performed by “The Wheeler” – the largest hopper dredge in the Army Corps’ fleet. The vessel, which is operated by the New Orleans District of the Army Corps of Engineers, travels from Brownsville, Texas to South Florida but spends most of its time working the Southwest Pass of the Mississippi River, specifically dealing with shoaling problems that happen in both high and low water. 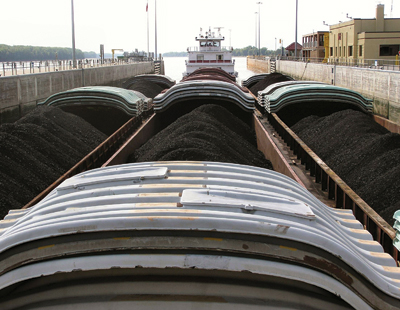 When operable, The Wheeler functions 24 hours a day and is manned by 38 civil service mariners that work “two on/two off” much like oil rig workers. During down periods, The Wheeler is docked so it can be refueled, re-supplied and receive maintenance. However, it’s capable of responding to any dredging emergency within three days.

How does The Wheeler work? In layman’s terms, The Wheeler is like a giant vacuum cleaner and is capable of removing 100,000 cubic yards of material a day. For a better visual, that’s 7,000 dump truck loads. Of that, 60 percent of the material dredged from Southwest Pass is reused to rebuild marshland and wildlife habitats in coastal Louisiana.

Environmental awareness is also a key aspect of the Corps’ Regulatory Program, which examines new development and grants permits on all construction projects that occur on the nation’s waterways.

“Initially, it served a fairly simple, straightforward purpose: to protect and maintain the navigable capacity of the Nation’s waters,” Poche says. “Time, changing public needs, evolving policy, case law and new statutory mandates have changed the complexion of the program, adding to its breadth, complexity and authority. (However) The Regulatory Program is (still) committed to protecting the Nation’s aquatic resources and navigation capacity.”