What are local businesses and homebuilders doing to handle the flow?

When the New Orleans City Council adopted a Comprehensive Zoning Ordinance (CZO) in 2015, it overhauled the zoning rules that had been in place in New Orleans since the beginning of Gerald Ford’s presidency.
Article 23 of the new CZO deals with stormwater management, and in a city that faces the fairly consistent threat of flooding from not only tropical weather but also routine rain events (as we’ve recently been reminded) stormwater is quite a big deal.
The rules state that a stormwater and landscaping plan for almost all new development (including some residential builds) must be in place before the permitting process can begin. Larger parking facilities came under particular scrutiny, as owners are now required to “capture, filter, infiltrate or store the first 1.25 inches of stormwater” shed from those largely concrete and asphalt structures.
The hope is to minimize runoff, which not only would reduce the load on the city’s often overburdened drainage system, but also be more eco-friendly. Parking lots made of permeable surfaces, as well as adjacent green spaces to retain subsurface water, are among methodologies seen as better solutions than simply forcing stormwater into the nearest drain and funneling it toward Lake Pontchartrain.
“Sometimes we are required, or it is best practice, to build retaining walls out of concrete that will surround an entire property to help drainage, and stop drainage from going onto a neighboring property,” says Zachary Tyson, co-owner of Tyson Construction. “We have built these retaining walls quite a bit, especially on infill-type lots where existing homes are surrounding a property.”
Tyson says his company has also been installing more subsurface drainage designed to take water from the rear and sides of a property out to the street.

New Orleans’ Love/Hate Relationship with Water
Being surrounded by water brought the city great prosperity at times throughout its history, but the same water has washed through town many times and brought destruction with it.

Today, there are likely more organizations dealing in some way with water resources, movement, and protection than in the city’s 299-year history. Groups like The Data Center, The Water Collaborative of Greater New Orleans, the Urban Conservancy and more are uniquely connected to the way we look at water — as much as the Crescent City is uniquely connected to the water that has buoyed it (and swamped it) since its inception.

The groups each figure to play a major role in the direction of future water movement projects in the area, said Urban Conservancy Executive Director Dana Ennes.

“New Orleans is a super-charged hub of activity right now,” Ennes said, referring to the groups. “Water is a resource. It’s an amenity. People around the world would kill for the amount of water we have here. We have to work with it to help ourselves.”

Ennes pointed to a recent agreement between the Baton Rouge-based Water Institute of the Gulf and Netherlands-based Deltares to work together on coastal erosion and better water resource management in south Louisiana. Gov. John Bel Edwards noted at a press conference announcing the agreement that such collaborations will not only be an asset to protecting Louisiana’s coast, but also will be a source of lucrative jobs in water management industries.

The CZO meant new opportunities for area contractors, architects and landscapers, but it also raised questions with those groups and some business owners. How much would the pervious surfaces cost and how would the new CZO rules apply to a 300-year old city where tightly-packed business corridors are part of the charm?

To help address some of the potential, as well as potential concerns, the Louisiana Construction and Industry Association began a series of workshops to inform its members of the CZO. The latest in that series was held June 22 at the New Orleans Mosquito, Termite, and Rodent Control Building on the lakefront.

Some 50 LCIA members in various business fields attended the workshop and a dozen presenters (including various city agencies and local industry leaders) took part as well. Urban Conservancy and StayLocal co-hosted the event, which also focused on the recent paradigm shift toward green infrastructure and building practices, along with materials used in that type of construction and the growing demand for such projects. 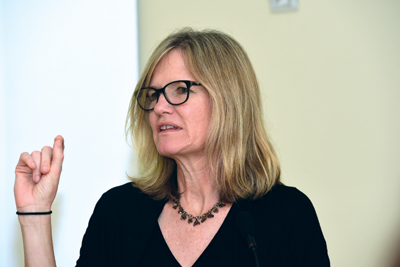 For the 4,000 contractors and associated business persons who are LCIA members, the CZO could stoke an entirely new wave of contract work in the Crescent City. LCIA leaders want to put members at the vanguard of the expected shift toward green growth.

“We connect our members with resources,” said Nicholas Peddle, marketing and communications director with the LCIA. “In this workshop, we put them with a host of city departments and other contractors and developers to learn about the problems the city faces with stormwater and what the solutions can be. Those connections are invaluable.”

Sean Killeen, co-owner of Demoran Construction says he is at City Hall every day working on projects that involve the new standard.
“To be honest, we as a city were a little bit behind the curve in terms of this kind of requirement,” he says, “so it’s new to all of us and there’s a bit of a learning curve. But we’re working together to get done what we need to get done.” 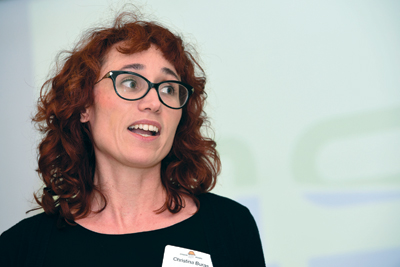 New Orleans’ approach to stormwater management has been the same for most of the city’s existence — move water off homes and businesses as quickly as possible and into the drainage system. The idea now is seen by some as antiquated and is recognized as counterproductive to maintain healthy groundwater supplies and overall water quality.

The culprit is concrete and water’s inability to permeate its surface. Alternative permeable surfaces greatly reduce negative effects of run-off, and with the addition of green spaces that act as natural stormwater retention areas, there is aesthetic value in the new approach, as well.

Tyson says his company has been doing some work in crushed limestone in lieu of concrete or grass.

“I think this is more of an aesthetic and lower maintenance choice versus grass,” he says, “but the limestone is permeable so that does help with water absorbing into the ground more as well.”

Not all LCIA members have embraced the new ideas. One contractor, who spoke on condition of anonymity, said products used for green infrastructure are more expensive, though some business owners and contractors disagree. The contractor said the CZO is cumbersome and not always employed in the best manner, pointing to one project in which an owner outside the levee system was being required to install pervious concrete in an addition to his property.

“The cost of construction has been going up in general in the past two or three years, and that was before this took effect,” says Killeen. “Labor costs are up about 10 to 12 percent, and so are the costs on materials. But when you’re building, you write that cost into the project and you get the work done.”

Both Peddle and LCIA Assistant Director Christina Buras acknowledged that there is “more work to be done” to spread the word about the possible windfall available to contractors, builders, and landscape architects who have the know-how to dream big inside the green infrastructure.

“This is a totally new concept here and we’re bringing it out into the forefront,” Buras said. “This last meeting was not a quiet one. There were a lot of people asking questions and exchanging ideas. In the end, that’s going to be good for everyone.”

“I think it will be neutral,” Killeen says. “Not sure it’s going to help us, but don’t think it will hurt us. I’m for it. We’re in the business of building and rebuilding the city. If it’s good for the city, then it helps us all.”

Parkway Bakery Stands Out
A shining example of good stormwater management is the rain-absorbing parking lot Parkway Bakery owner Jay Nix had installed two years ago at his popular eatery in the Bayou St. John neighborhood. Flooding was a problem in the lot, and the pervious surface in place now not only fixed that, but is also easier on the city’s drainage systems and on the environment. Nix earned applause from all corners for his decision.

“That’s a free-market solution to the problem,” said Nicholas Peddle, marketing and communications manager with the Louisiana Construction and Industry Association.

“We need more champions in the business community like that to point to the work and say ‘This is why I did it, and I’m happy I did,’” said Dana Ennes of the New Orleans-based Urban Conservancy.