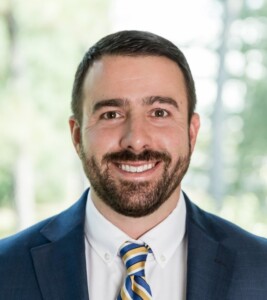 Landry joined Stirling in 2007, where his primary focus has been to oversee the economic feasibility of developments and acquisitions across all of Stirling’s property types. He also manages a $1.2 billion debt portfolio of over 80 real estate loans. He has been responsible for the placement of a multitude of real estate debt for clients. Since 2007, Stirling has closed nearly $3 billion of interim and permanent financings with every type of lender that operates in the Gulf South.  Additionally, Landry has played a role in Stirling’s move into multi-family real estate.

“After graduating from LSU, Justin joined Stirling and has truly learned debt and equity markets and the commercial real estate industry from the ground up.  His growth as a professional and a leader has been an amazing journey. We are excited for the future of Stirling and Justin playing a significant role in our evolution,” said Underhill.

As part of the Stirling ownership, Justin will expand his role within the company’s development, finance, and acquisition functions and help lead the company in expanding its existing business plan, growth, profitability and strong business connections.

“Justin has proven to be an exceptional leader within Stirling and our industry. And most importantly, he embodies our core values and is a role model for others,” said Marty Mayer.

Justin is an active member of ICSC (Innovating Commerce Serving Communities), where he has served on their Scholarship Committee and Next Generation Leadership Network. Most recently, he was chosen as Marketplace Council Director for the Southeast Region. In 2020, Mr. Landry was awarded the prestigious CRE credential by the Counselors of Real Estate.