STILL ON TOP WHEN IT COMES TO TONNAGE

Recently released rankings confirm The Port of South Louisiana remains the Largest Tonnage Port in the Western Hemisphere — a distinction those on the inside are proud to share and determined to maintain.

Once again, the Port of South Louisiana remains the Largest Tonnage Port in the Western Hemisphere. In 2016, 294 million short tons of cargo passed through this 54-mile stretch of the Mississippi River.

And he’s got a point. It’s impossible to argue the Port’s geographical footprint on the Mississippi River — and all the natural benefits and resources that exist because of it — certainly contribute to the massive amounts of maritime activity happening within the Port District. But it’s also short-sighted to suggest the deep water of the Mississippi River is solely responsible for the Port’s run of recent success, because doing so would ignore the strategic efforts created and implemented throughout the years enabling the Port to fully benefit from its geographic good fortune.

“The sense of pride we feel in these tonnage reports isn’t being No. 1, or being in the Top 20 tonnage ports in the world,” Aucoin said. “The pride really comes in knowing that more tonnage means more jobs. That’s the way I look at it — every year we see an uptick in tonnage, it means we’re doing our job because more jobs are needed to handle that tonnage.”

Beyond the Mississippi River, the Port’s tonnage rankings are fueled (literally) by the abundance of energy sources in and around Louisiana, and the developed infrastructure on site at the Port to funnel that power source where it’s needed. Within the Port District, there are 159 natural gas pipelines and 33 crude oil pipelines. Thanks to that already-established pipeline system, the Port through three quarters is already on pace this year to surpass 2016’s tonnage totals. Specifically, current cargo totals for crude oil, chemicals and fertilizers, steel products and coal/coke are all way up compared to this time last year.

An economic study authored by Dr. Loren Scott, titled “Powerhouse On The River” concluded the Port of South Louisiana is responsible for 33,000 direct jobs, handles $60 billion in trade annually and has $23 billion worth of announced projects in the works.

“As Paul Aucoin likes to say, ‘We are the best kept secret,’” said Linda Prudhomme, Director of Business Development for the Port of South Louisiana.

“We are that little gem between Baton Rouge and New Orleans that not a lot of people pay attention to…but the shippers do. The agriculture businesses shipping cargo from the Midwest know who we are. Chinese industries know who we are — the Port that provides a great deal of service to the United States and to foreign countries.”

“When these wonderful companies located here, some as long as 40 years ago, they knew why they wanted to be here: because the Mississippi River is like the front door to the world market.”

With that said, the Port of South Louisiana has done a fantastic job laying the welcome mat out to that front door, specifically through improvements made to the Globalplex complex. Recently, the quarter-century old facility has undergone and continues to undergo a massive makeover, making it more attractive for future tenants of the Port District and more useful for those currently in operation.

“We already have the Mississippi River. We always have a skilled, highly-trained workforce. We have the land and deep-water sites. So re-investing into Globalplex is just one more asset that makes the Port of South Louisiana a viable destination for companies,” Prudhomme said. “We’re always trying to actively help industries continue their investment in this 54-mile stretch, but also attract industries to the 54-mile district, as well.”

Besides doing for others, the Port is helping themselves run more efficiently by relocating their administrative offices — which are currently spread out and miles away from the heart of the Port — all under one roof at Globalplex. The move should be completed by the end of 2018.

“We’re always looking forward and figuring out ways to improve,” Aucoin said. “And it doesn’t seem like much, but our administration building – or what we call our Business Development Office – is part of moving forward. I mean, right now I’m talking to you from LaPlace, which is about 10 miles from the port. So to have us there, on the river, is important. Every one of us, in the Port District, on the river, having a presence at Globalplex.” 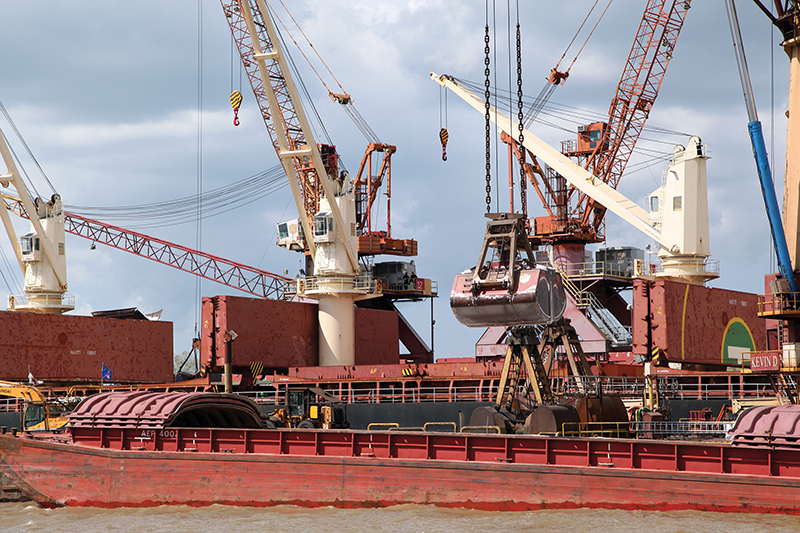