Stepping Back to Move Forward

Past and present collide in the classical work space of Pres Kabacoff, CEO behind HRI Properties – responsible for $2 billion in revitalization projects around the country.

A step inside Pres Kabacoff’s office in the neoclassic Hibernia Bank Building at Carondelet and Gravier Streets is a step back to an era when wood paneling was the mark of luxury.

Kabacoff is right at home in his small but grand workspace in the stately building that dates to 1921. Twenty-three stories tall, it was the tallest building in New Orleans for 43 years.

“I find this a vibrant space, and I never stop marveling at the fine original workmanship in the building and my office and the adjoining board room in particular,” says the 69-year-old visionary who recently climbed to the top of Mount Kilimanjaro, the highest free-standing mountain in the world.

Kabacoff has spent most of his adult life conquering business mountains.

“It’s the challenge that makes each business project interesting,” he adds as he gives an update on HRI Properties, the company he has lead since its founding in 1982. “Today we have 1,600 employees and we have completed $2 billion worth of revitalization projects in 15 cities across the U.S.”

Kabacoff is quick to give heaping credit to Tom Leonard, president of HRI Properties, for his help in leading the company to the pinnacle of success it enjoys today.

“Tom grew up in the company, and he has proven to be a great leader,” he says, adding that Almanac Realty Investors on Wall Street just invested $150 million in HRI. “It’s an amazing honor to have been sought out by Almanac for such an impressive investment,” he says.

There is nothing sleek in Kabacoff’s office. Here you will find fine mahogany paneling, a pair of elaborately carved chairs from Rajasthan, India, an antique Oriental rug covering the wooden floor, a George Dureau painting of Professor Longhair, and his ever-present briefcase – a hand-woven, simple, medium-sized shopping bag.

The adjoining boardroom is a study in the grand design of the era during which the building was constructed, with a unique bas-relief ceiling and an envelope of mahogany paneling to match his office.

Kabacoff thinks of himself as a man of simple desires who is presently teaching himself to play chess.

“I usually begin my day by studying the game of chess in my garden,” he says, referring to the new environmental “green” house he recently built in the Bywater with his wife, Sallie Ann Glassman, an artist and voodoo priestess.

GRAND AMBITIONS
HRI Properties was founded by Kabacoff and the late Edward B. “Ed” Boettner while both were working on converting the Federal Fibre Mills building into major venues for the New Orleans 1984 World’s Fair. The company has since become known for its incredible transformations.

“We are currently aggressively involved in the revitalization of the upper Canal Street area,” Kabacoff says. “My passion is to fix the center of New Orleans so it will connect with our neighborhoods to create a vibrant new city.”

Kabacoff says his focus is on a triangle, with Canal Street at the apex, and the Iberville area and Charity Hospital as the two anchoring points. HRI is currently converting the 225 Baronne Building into mixed use and upgrading the Iberville public housing projects into modern homes.

“This is all also being driven by the huge medical projects now in progress along Tulane Avenue,” he says. “I envision New Orleans taking its rightful place right up there with Houston and Birmingham as a noted medical center.”

He dreams that someday the core of New Orleans will be like Paris.

“In Paris you can go for many blocks and have a fascinating, safe experience,” he continues. “If you can fix the center of New Orleans, then you can have the same experience of being in Paris. We can never forget how important the French Quarter is in all of this. My dream is to expand the current tourist boundaries of the French Quarter to embrace the city as a whole.” 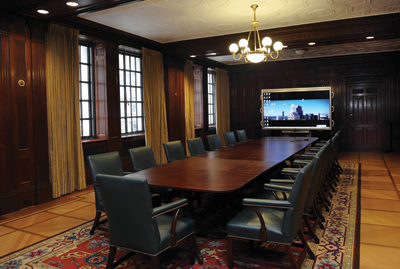 The handsome adjoining boardroom is a study in the grand design of the era in which the building was constructed. It features a unique bas-relief ceiling and an envelope of mahogany paneling that matches Kabacoff’s office.

“I agree with Phyllis, who feels every New Orleans student deserves the same chance at success – the same opportunity to be a vibrant, healthy and motivated young scholar,” he says.

Kabacoff is also involved with other projects, such as searching for ways to save our coast and how to reduce the mass incarceration of the population.

“There are so many challenges that we need to face in our community,” he says. “I am always searching for ways to improve our way of life in this wonderful city that I have always called home.”

And now that Mount Kilimanjaro has been conquered, Kabacoff still does his training of walking up and down the steps of the Hibernia building a couple of times a week.

“Don’t forget to add that Sallie Ann joins me most of the time,” he says. “I also cross train by running, lifting weights and swimming on the days I don’t do my Hibernia climb. Our goal is to do the Inca Trail in the Peruvian Andes in the summer of 2015.”
It’s clear that this is a man who’s not afraid to set his goals high.