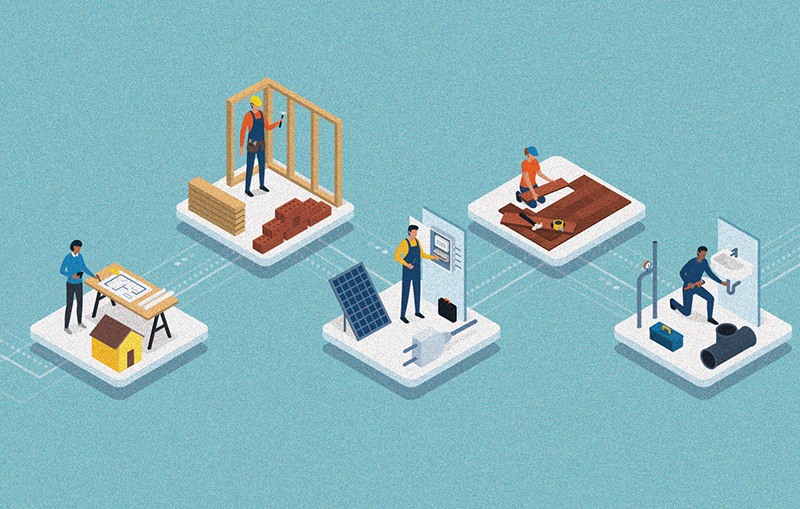 We’re actually in growth mode, where back in March I wouldn’t have said that. Kristian Sonnier, VP of communications and business development, Ryan Gootee General Contractors

After a tough couple of months, the real estate and construction industries appear to be closing out 2020 on a rebound and headed into 2021 with a positive outlook.

“It’s been a rollercoaster this year,” said Melissa Rome, founding partner of Rome Office, a full-service architecture firm. “Right when the pandemic hit, we had a lot of conceptual development work we were doing that kind of stopped dead in its tracks.”

Rome added that projects already under construction kept going, noting that, “It’s a detriment to all parties involved for [them] to stop.”

Rome said having a variety of work has been key. “We like to keep things exciting, so we jump at the chance to do new types of projects,” she said.

Currently, the company is working on two park projects — a redesign of the George Washington Carver Playground in New Orleans, and BREC Airline Highway park in Baton Rouge, where Rome said the company is “designing all of the architectural elements, so there will likely be a kayak-launch building with some rental space, a couple of educational pavilions, a maintenance lodge, things like that.”

“The owner has decided to restore the exterior to its 1920 appearance,” said Rome, “which is really exciting because it was clad in this stamped metal to make it look like it’s a stone building, so we’re working on restoring that right now.”

For CM Combs Construction, based in Madisonville, the shutdown early this spring came at a tough time.

“We had a really good year last year (2019), and a lot of the work wrapped up early in 2020,” said owner Chris Combs. “So right when we were attempting to load the boat again, the shutdown happened.”

Fortunately, Combs says, few projects were cancelled, but some were postponed. The company currently has a number of projects near completion, including a new kitchen for the Alario Center in Westwego, the Audubon Aquarium’s new shark tank touch pool exhibit, and the canopy of peace above The WWII museum, which Combs said will be finished before the end of the year. Longer term, the company is working on a clinic for Enlighten Dental and new classrooms and a music building for Covington Elementary School.

“The phone is ringing a lot,” Combs says. “There are a lot of people speculating, and some excitement building across a lot of prospective clients. There’s this anticipated flood into the market of projects to bid and money that’s just kind of been sitting on the side waiting for all of this to return to some sort of normal routine. The anticipation is that things are moving toward a more positive market for us.”

Not Just Alive, But Thriving

After a tough spring, Kristian Sonnier said the phone is ringing at Ryan Gootee General Contractors.

“We’re actually in growth mode, where back in March, I wouldn’t have said that,” Sonnier said. “We’re looking to hire people right now.”

RGGC has a number of projects underway, ranging from historic commercial developments to luxury lifestyle apartment buildings. Projects include a historic renovation of the Fidelity Bank Building in the Central Business District, luxury condominiums on St. Charles Avenue at First Street, and a mixed-income multifamily development in the Bywater on Burgundy.

RGGC is also transforming the former Norwegian Seamen’s Church on Prytania Street into a wellness center called the Santosa Center for Healthy Living.

“It seems that there were a number of people who were planning to make capital improvements to their projects or invest in new projects pre-pandemic,” Sonnier said. “People who were well capitalized are taking this opportunity to double down on their investments and build, so we’re bullish moving beyond the pandemic.”

The Medical Sector Benefits from a Boost

“Last year, 73% of our projects were medical and I wouldn’t be surprised if it’s a similar number for this year,” Hodnett said. “With the technological advances that are happening in medical, you almost have to continuously evolve and continuously renovate your spaces to stay relevant. It’s a really competitive business out there.”

Donahue Favret has done a lot of work for Thibodaux Regional Health System. Earlier this year, the company built out a space for 30 ICU beds in 75 days — less than a third of the time it would typically take — in order to prepare for pandemic healthcare needs.

Woodward Design+Build is also doing a lot of business with the medical industry. They’ve wrapped up work on the Gayle and Tom Benson Cancer Center expansion at Ochsner Medical Center and are looking ahead to projects that are just getting started, including an endoscopy center in Metairie, a surgery center in New Orleans, an urgent care facility and a pharmacy.

Woodward Design+Build is also finishing up a mixed-use property, The Odeon at South Market.

“It’s a 30-story building, the tallest building that’s been built in New Orleans in the last 30 years or so,” said Riley Kennedy, director of organizational development for the company. “Four stories of the building are dedicated to parking and retail, and then 26 stories of apartments.”

Another big project for Woodward, set to be completed in May 2021, is the Four Seasons Hotel and Residences, where the former World Trade Center building is located.

The hospitality industry in New Orleans has taken a huge hit this year from the pandemic. Nick Moldaner, market leader at Palmisano — a commercial and civil contractor with a strong hospitality focus— said the company has expanded its reach.

“There was somewhat of a pivot that we had to make,” he said. “There’s not much hospitality work on the books, so luckily we’ve been able to pick up a few housing projects that are going to help fill the gap.”

Palmisano is finishing up a number of projects including The St. Vincent — a historic renovation of a boutique hotel in the Lower Garden District — the new Rouses Market on Freret Street, and a mixed-use, historic renovation at 623 Canal Street, a repurposing of an old building to retail with apartments above.

“We always planned on being more regional, but that’s been accelerated,” said Moldaner. “From Shreveport to Pensacola, we’ll have projects running as soon as December. Once the pandemic hit, we started looking at what other markets we need to entertain and taking a stronger look at some of the opportunities that were coming our way in Shreveport, Lake Charles, Pensacola, getting out of that 60- to 90-minute drive.”