The mission of the Jefferson Chamber Young Professionals is to cultivate future civic and economic leaders of Jefferson Parish and the surrounding community through philanthropic initiatives, education, and leadership development opportunities. The opportunities offered to young professionals fall under four categories: Social, Eats & Edu., Power Lunch and Coffee & Community.

As the short-term economic consequences of an unprecedented global pandemic fade further and further away in the figurative rearview mirror, and on the heels of a fairly inactive late summer and early fall hurricane season, the talking points at this year’s State of Jefferson Parish address focused heavily on pinpointed, region-specific issues compared to the universal hurdles facing most of South Louisiana in 2021.

Citing the need for massive parish-wide improvements to the existing water and sewer system, Lee Sheng referenced a recent global infrastructure hub study which found that the economic multiplier for public investments is 1.5 times greater than the initial investment in a 2-to-5-year timeframe.

“In other words,” Lee Sheng said, “for every $1 invested in infrastructure, $3 in economic activity is created. And perhaps more importantly to those of us in this room, a highly functioning water & sewer infrastructure maintains the value of both your business property as well as your recreational property.”

In March 2021, Jefferson Parish voters approved separate water and sewer millage increases, and in January 2022, the parish increased its water and sewage fees (which, at the time, were some of the lowest in the country) to help fund this 20-year improvement project that will utilize total investments of more than $1 billion. And while Lee Sheng acknowledged that price tag appears hefty, she also noted that a piecemeal, ‘fix it when it breaks’ approach, would ultimately be 10 times more costly that an overall pipe replacement program.

“I believe securing this funding for infrastructure will be one of the biggest accomplishments of our administration and our council during this four-year term of office,” Lee Sheng said.

From there, Lee Sheng spent the remainder of her time at the podium further explaining her local playground system reformation plan, a proposal that drew a lot of attention and made headlines a week earlier. Lee Sheng’s original plan would have transformed six of the 27 existing Jefferson Parish playgrounds into year-round “sports academies” that would provide elite instruction on par with the coaching kids get on private (and costly) club and travel teams.

“Our best athletes, who get the best training, in this parish are the ones whose families can afford (club sports) and that doesn’t sit well with me,” Lee Sheng continued. “Everyone should be able to excel in the sport of their choice and make a high school team. Jefferson Parish recreation needs to give them that specialized experience all year long.” 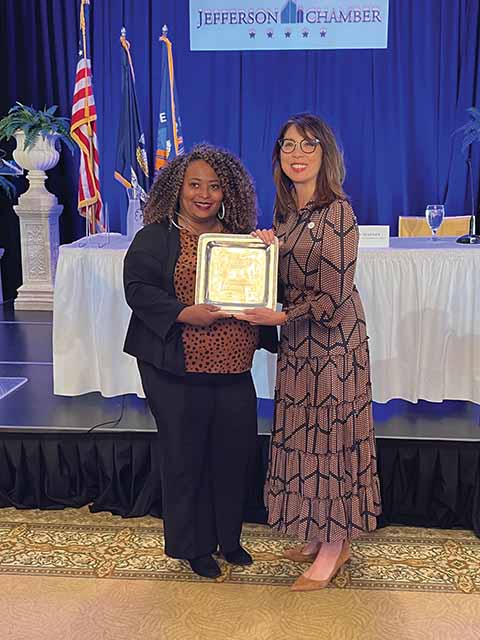 “We have empty gyms, so why does basketball season have to occur between November through January?” Lee Sheng asked. “Why can’t I run basketball, again? Why can’t I call it a basketball academy and run it all year long?”

Lee Sheng concluded by saying she and her staff will solicit input from the public before making any sweeping changes to the existing playground system.

Next up, Ricky Templet gave a quick introduction before rolling a video outlining the notable goings-on in each parish district and the civic causes each councilperson has been championing within their own jurisdiction.

Templet’s focus has seen progress made in a variety of areas, including the parish’s proper use of $84 million in ARPA monies to be allocated to projects that create a return for Jefferson Parish by way of land banking, infrastructure and broadband improvements and public private partnerships. Additionally, he has led the way in fostering Docusign and electronic procurement procedures, returning Gretna Fest after a 2-year hiatus, supporting legislation to streamline permitting, and enhancing quality of life through community partnerships to address litter, homelessness, and beautification.

Scott Walker, Councilman-At-Large, has spearheaded a $1 million campaign to fun early-learning programs that will benefit 28,000 Jefferson Parish children four years of age and under. The Jefferson Ready Start Network—a collection of business owners and educators that organized together in 2020 to provide quality daycare access to low-income residents—will be instrumental in Walker’s ambitious initiative.

In District 1, Councilman Marion Edwards, plans to re-energize activity along the Gretna Ferry Landing, including the return of water taxis to boost tourism sector dollars. Councilman Edwards has also been involved in securing funding for a project that will update street lighting in Terrytown and Harvey.

In District 2, Councilman Deano Bonano has worked tirelessly to rejuvenate the old Zephyrs Stadium complex on Airline Drive in Metairie. Bonano secured an additional $10 in state funds to turn the ‘Shrine on Airline’ into a multi-purpose stadium capable of hosting high school football, soccer, and rugby matches, along with concerts. Bonano is also working with the New Orleans Saints brass and executives at Ochsner to develop a state-of-the-art sports rehab center and hotel on the expansive Saints facility and Zephyrs Stadium footprint. Additionally, District 2 is home to the new Avondale Global Gateway (also known as Avondale Marine, LLC), a maritime commerce site expected to handle more than 1 million tons of cargo this year. It operates on the site of the old Avondale Shipyard, which closed nearly a decade ago.

In District 3, Councilman Byron Lee has focused his attention on breathing new life into the Alario Center athletic complex on the Westbank, in hopes of returning it to its original splendor. Securing funding for a $5 million upgrade will turn the Alario Center into a multi-use facility capable of hosting AAU and youth sports tournaments but also civic events like Mardi Gras balls and music concerts. Lee has also addressed areas of his district once considered “food deserts” by facilitating public-private partnerships to construct grocery stores in those underserved neighborhoods.

In Councilman Dominick Impastato’s District 4—which includes much of northern Kenner—is experiencing an economic revival thanks to the announcement of a new casino and plans to revamp Esplanade Mall. To keep these assets, and the assets of private citizens, safe, District 4 is home to a new $13 million pumping station.

Finally, in Councilwoman Jennifer Van Vrancken’s District 5, $11 million has been allocated to aid in the redevelopment of the Bucktown waterfront, making it appealing to kayakers/canoers along with walkers wishing to pace the shoreline. Also, construction continues on Severn Avenue that will solve flooding issues while lessening the overall carbon footprint by widening lanes for bike and foot traffic. 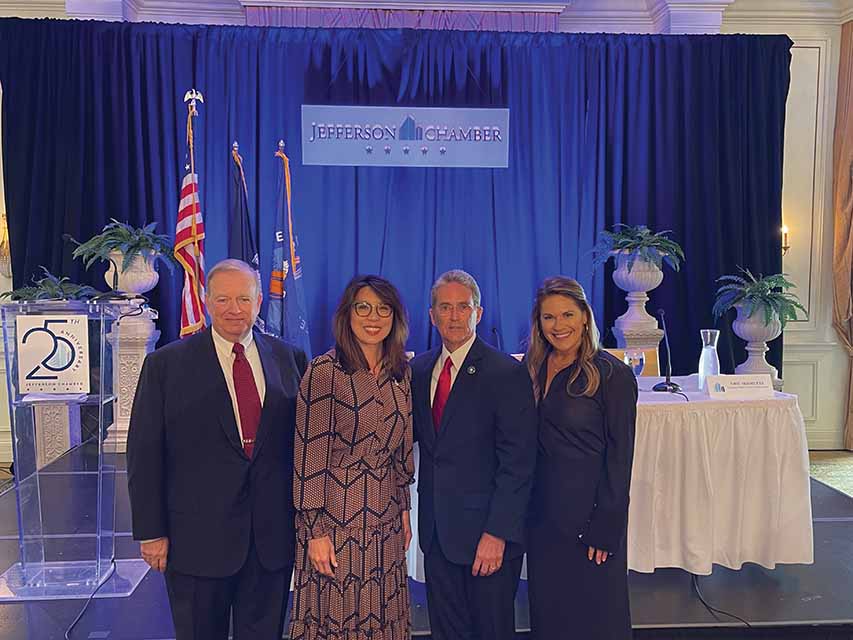 “The state of Jefferson Parish is strong, safe and resilient,” Templet said. “The administrative and legislative teams of Jefferson Parish are working in harmony to accelerate progress on all fronts despite the challenges of a pandemic, record inflation, rising gas prices, faltering supply chains, and even the wrath of Mother Nature. Jefferson Parish has been one of that fastest parishes to return to commerce following (Hurricane) Ida—a testament to true teamwork at all levels.”

Lee continued, “A strong economic base, rising sales revenue, rising property values, innovative thinking, collaborative leadership to build a better parish, and a safe and peaceful lifestyle all define the state of Jefferson as thriving. That’s why we believe as goes Jefferson, so goes the region.”

Louisiana Public Service Commissioner Eric Skrmetta spent his time at the microphone trumpeting the continuing need for regulations that prevent utility companies from passing on in-house costs (like executive bonuses, fuel-adjustment charges) to the ratepayers (i.e., the consumers). Skrmetta said government-backed initiatives such as The Green New Deal is forcing utility companies to abide by new mandates—like increasing renewables while driving out traditional energy sources like natural gas—which will in turn raise cost standards.

“So, the result is your bill is more expansive, but it’s from conditions that the (Louisiana Public Service Commission) has no control over,” Skrmetta said. “But we are constantly fighting to find ways to change that.”