When Jefferson Parish leaders met in November 2019 to deliver the annual State of Jefferson, there was an overarching tone of optimism for the progress and innovation they hoped to bring to the region. Of course, no one had any idea that when Jefferson Parish President Cynthia Lee Sheng was sworn into office January 8, 2020, that the remainder of the year would bring about unprecedented challenges and interruptions.

Despite that, the 2020 State of Jefferson, held on November 19, 2020 for a limited in-person audience and hundreds of digital viewers, delivered not a message of defeat but of unity, perseverance and hope. Sitting on the panel were Lee Sheng, Jefferson Parish Councilman-at-Large Division A Ricky Templet and Jefferson Parish Sheriff Joe Lopinto. Each had an opportunity to update business leaders, stakeholders and constituents on their progress throughout the COVID-19 pandemic and an election year that saw the region threatened by numerous hurricane-strength storms.

Lee Sheng first took the stand to emphasize the tenacity of Parish leadership in pivoting resources to protect the community. She noted how the city’s Emergency Operations Team was involved with testing; librarians with call centers; property maintenance and zoning officials with mask enforcements; council offices with distributing masks and food, and several committees with providing rent, utility and food assistance. Additionally, Lee Sheng noted that the Emergency Operation Center was activated five times during the 2020 hurricane season, with Hurricane Zeta wiping out electricity service to 80% of residents mere days before the presidential election. She commended emergency management teams for providing essential support to Entergy in order to to power polling stations.

From there, Lee Sheng’s presentation focused on accomplishments that might have been overlooked in the shuffle, including the reorganization of the Jefferson Parish administration. Changes in management structure, she said, were made to elevate the resources available by strengthening internal efficiency and collaboration. “I believe problem solving starts with having good and frequent communication, along with a trusting relationship. This is how we give ourselves the best chance for success.”

Regional transit has become the subject of a new initiative helmed by Lee Sheng’s administration in an effort to promote connections — and in turn, a strengthened regional economy — between Orleans and Jefferson Parishes. In addition to the JeT Bus Tracker mobile app,, which will map transit routes and times, RTA vehicles in Jefferson Parish have been equipped with ultraviolet disinfection systems to prevent the spread of bacteria, a technology not yet in use by any other parish in Louisiana.

Lee Sheng said that while efforts post-Katrina focused on drainage systems, the parish’s sewage systems are from the 1960s. “We need to start focusing on these public infrastructure systems,” she said, noting that an East Bank water treatment plant upgrade has begun, along with a $70 million update to the chemistry lab. She said that the Terrytown water site, which many residents use to pay bills, currently costs more money than it makes and is being removed. It will be replaced by a partnership with MoneyGram and Checkfree, which will allow residents to pay bills at 100 new sites throughout Jefferson Parish. Eventually, a mobile app will show users their water usage by the day and hour, as well as detect any water leaks without the need for dispatching personnel. “We’re not there yet, we don’t have the funds yet, but that’s what a future, modern water system looks like.”

Lee Sheng rounded out her presentation by touching on issues that have long been central to her platform, like green infrastructure that reduces reliance on drainage, continued upgrades to the roads and landfills, more publicly-accessible WiFi networks, updates to the parish’s recreation facilities, and public information and cross-culture outreach initiatives like a translator widget on the Jefferson Parish website, which will translate the site in over 100 languages.

Council Chairman and Councilman-at-Large, Division A Ricky Templet took the stage next to deliver a central message that throughout such a challenging year, “We were able to keep moving Jefferson Parish in a positive way.”

Templet highlighted the council’s role in facilitating the sale of East Jefferson General Hospital during the pandemic, as well as their rebranding initiative, launched at the turn of the new year, to reinforce Jefferson Parish’s identity as one of the largest and wealthiest regions in the state. All this, he said, stems from the council’s collaborative relationship with parish administration. “I just want to make sure you know, it’s ‘us.’ You’ll never hear me say ‘me’ or ‘I.’ It’s ‘we.’ We’re all in this together, and we’re moving this parish forward together.”

Templet then presented a prepared video showcasing the quality of life of Jefferson Parish residents and major ongoing projects. A surprising but optimistic statistic cited a JEDCO report which concluded that “97% of Jefferson businesses with a strong, educated workforce expect no layoffs, and seven out of 10 are planning to expand.” Additionally, Parish leadership became the first to adapt to the COVID-19 pandemic by hosting virtual council meetings, while businesses acted quickly to innovate and pivot their services to accommodate shifting safety protocols.

Other key points included a $10 million upgrade to the parish landfill that drastically reduced harmful emissions; upgrades in roadways which promise to reduce traffic surrounding the new airport terminal; $5 million in renovations at the Kenner Boat Launch to provide better ramps and docks, with a rock jetty to protect the boat channel from wave action; neighborhood revitalization in Terrytown and Harvey to improve housing and infrastructure; marsh restoration and a living shoreline project in Bucktown; an aggressive beautification plan to attract new residents and businesses, and the development of 100-year flood protection levees with flood gates, among several other protection initiatives. “The state of Jefferson Parish can be defined as financially strong, growing vigorously, and overcoming the challenges of nature and science,” said the video’s moderator.

Comparing uniform crime stats between Jan-Oct 2020 to the same time range in 2019, overall crime trends decreased by 10.9%. Lopinto said these downward trends are assisted by Jefferson Parish’s unique ability to run evidence in its own accredited crime lab, where fingerprints, phone records and DNA can be processed without the delays that might be experienced if evidence were sent to state crime labs. This leads to faster, more efficient arrests.

Lopinto, who also serves as the parish’s tax collector, provided an update on tax collections, which saw major disruptions early in the year due to the pandemic. Overall, collections are slightly down at -0.55% as compared to last year, with notable decreases in general sales (-3.42%) and hotel/motels (-37.14%). But Lopinto says such statistics are reflective of shifting consumer trends, indicating a 13.6% increase in food and drug taxes and a 2.14% increase in motor vehicle sales. Separately, remote sellers are “bringing in about $1 million per month just to Jefferson Parish.”

Lopinto said it’s important to assess collections by industry to obtain an accurate idea of how the pandemic has affected certain businesses. “Hospitals are obviously up this year. Motor vehicle sales were up this year. If you’re a bar room, you’re obviously down this year.” Other industries that saw increases in revenue and tax collections were occupational licenses (+92.14%), chain store taxes (+426.73%) and insurance premiums (+946.14%), while alcoholic beverage permits, auto rental taxes and occupancy taxes experienced decreases. Property taxes experienced an overall increase of 1.95% with over 99% of total property taxes collected every year.

After taking questions from moderator and Chamber President Todd Murphy, the panel rounded out closing statements by encouraging residents to support local business owners by shopping local. Lee Sheng said that while her first year in office as Parish President might not have played out the way she anticipated, the challenging year has only strengthened her resolve and her pride in the unity of local leadership.

“We can see the light at the end of the tunnel, and I know that we’ll be poised as a parish to fly again,” she said. “I’m a big believer that the struggle only makes you stronger. Without this year, I wouldn’t have the pride that I have in our entire community and the team we have. I’m very hopeful.” 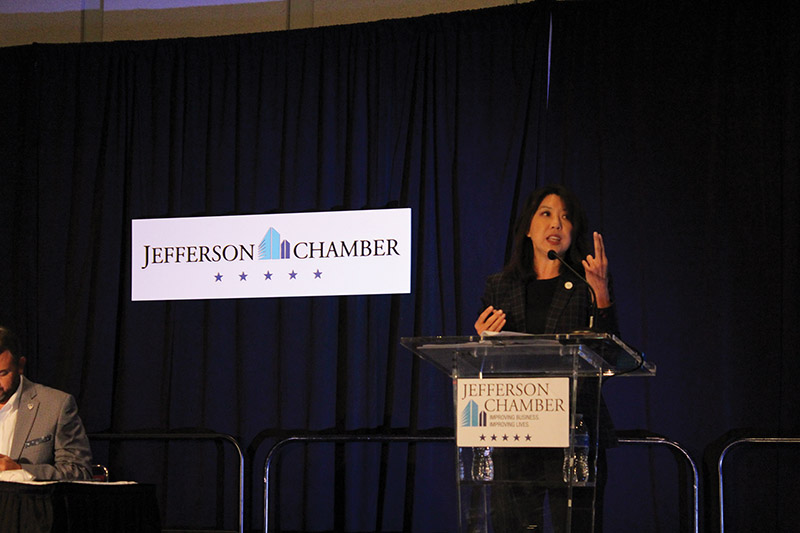 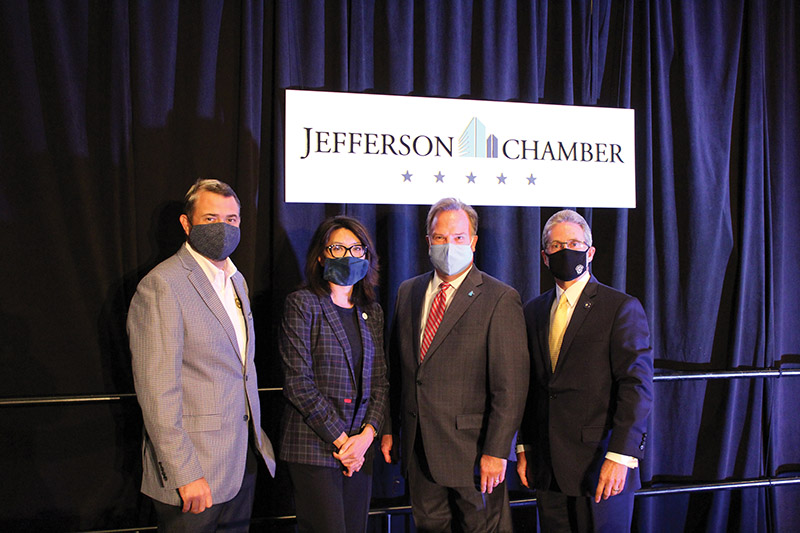