Spotlight on the Home and Garden Show + Parade of Homes

With a territory stretching seven parishes, from Plaquemines to the River Parishes, Orleans, Jefferson and St. Bernard Parish, the Home Builders Association of Greater New Orleans’ (HBAGNO) geographic domain towers over the relatively low elevation of the properties developed by its members.

Jon Luther, CEO, built his career on Capitol Hill before joining the HBAGNO just seven days before Hurricane Katrina. “I met this New Orleans girl… took the job and have not stopped in 13 years.” After nearly 25 years in the industry, “It is something that I love, who I am and what I do,” said Luther.

HBAGNO is responsible for both the Home and Garden Show and the Parade of Homes, two flagship annual events that, thanks to a committed and creative team, continue to draw homeowners, builders and dreamers looking to experience the new and the innovative.

On March 15, 16 and 17, the 2019 New Orleans Home & Garden Show will take over Mercedes-Benz Superdome, home of the New Orleans Saints, Sugar Bowl and a symbol of hope in the post-Katrina landscape.

For the three-day run, the 64th annual show hosts top chefs for cooking demonstrations, local artists creating new pieces on-site and anything and everything that you can now put the word ‘smart’ in front of.

“It is a different market now,” said Luther. “People don’t go places to shop. We try to be creative enough to have people want to come to the show and meet with our vendors. We have the Superdome, an iconic place in its own right, and people want to experience that as much as the show itself.”

Truth be told, the annual event is nothing short of spectacular.

“The theme this year is centered around comfort,” said event producer Mike Zalaznik, speaking of both indoor and outdoor living and, of course, home automation.

New technology for the home is on display around every booth corner, in almost every niche. “It used to be that people were kind of scared by it, but they are far more comfortable with the technology,” said Zalaznik. “Now, everyone has a smartphone. What they are building is smart homes. It is the direction the building industry is going in.”

Dynamic Audio and Video will set up a 20 x 30 space in the center of the show floor, where the two big aisles meet. Attendees can expect to see Alexa, Amazon’s AI assistant, in full home automation mode. “Not that it’s new,” said Jamie Gannon, owner, “but I think it is finally to a point that it makes sense to demo. It is integrated with a lot more things this year.” Attendees and home users can expect to see Alexa control lights, shades, music and temperature.

In addition to getting a first-person look at all that Alexa can do with her new software updates, Gannon is planning to display a “mind boggling” 8K TV by Samsung. “It literally looks like you’re looking at a window.” Samsung is quiet about the release date, as the sneak peak was for industry tradesman only.

Benjamin Bullins’ Dumpster Dive will return for the 2019 show. This year, there is yet-to-be-confirmed talks around creating one large piece of art where participants can come, no reservations needed, and create one part of a larger piece that will later be auctioned off.
“We always have the core stuff,” said Luther, listing home lighting, appliances and décor, “but also the element of the future. We are always looking to push the envelope on what our interpretation of how people are living or want to live in their homes now.”

Two houses brought in by Davie Shoring will cater to people’s growing fascination with smaller living. “They want to look at tiny homes,” said Zalaznik. “They are not buying a lot of them, but it translates to is compartmentalizing and making your home and living space more efficient.”
The Davie Houses will compare two models of their 900-1600 square foot shotgun houses designed in the Creole Cottage style to showcase how a single person or a couple might utilize the space.

You can’t exactly wander the Parade of Homes like it’s Mardi Gras, but that doesn’t mean it isn’t a spectacle.

Some of the best builders in the region open doors to new construction highlighting walkable neighborhoods in Orleans, Jefferson, Plaquemines and St. Bernard Parishes where the latest in building techniques, design concepts and strategies pushing the boundaries of custom homes will be on display. This year’s event will take place over two weekends, free of charge. The HBAGNO has dispatched save-the-dates for June 1-2 and June 8-9 for the 2019 Parade of Homes.

With an impressive record for raising funds for children’s cancer research, the St. Jude’s Home Giveaway returns for the 2019 Parade. Raffle tickets for the home are also on sale at the Home and Garden Show.

The new construction on 419 22nd Street in Lakeview is built in the Modern Craftsman style with a farmhouse kitchen by donor and sponsor Hyman L. Bartolo Jr. Contractors, Inc. Visitors to the open house can expect to see cathedral ceilings and farmhouse beams as a focal point.
Gerald Mire, designer of the St. Jude’s house, expects the final design to showcase the holistic approach to homebuilding consistent with energy efficiency and indoor/outdoor living.

After successes in Holy Cross and Bywater, LaGraize Builders are taking on neo-cottage designs in Old Arabi, where value is built into the structure itself. Visitors to his homes can see rounded corners on sheet rock, instead of the standard use of trim. “Everything moves, even concrete,” said LaGraize. “All that caulk starts to expand in the heat and shrink in the cold, opening up cavities in your house.”
Energy efficiency is a top priority for builders and buyers alike.

“Eighty percent of the heat in your house comes through the roof,” said LaGraize, adding that the most important thing is to keep that heat away from the walls. Forget power fans: LaGraize chooses natural ventilation. “Every house I build now has gable vents that allow natural air flow to come in and out of the attic.”

This kind of neighborhood investment is exactly what the HBAGNO loves about the Parade of Homes. HBAGNO CEO Jon Luther has been particularly impressed by the work done over the past few years to solidify the future for St. Bernard as a community. “There will be five or six homes in Old Arabi,” Luther said. “It is a terrific way for us to help the local parishes and is a really nice, collaborative partnership.” 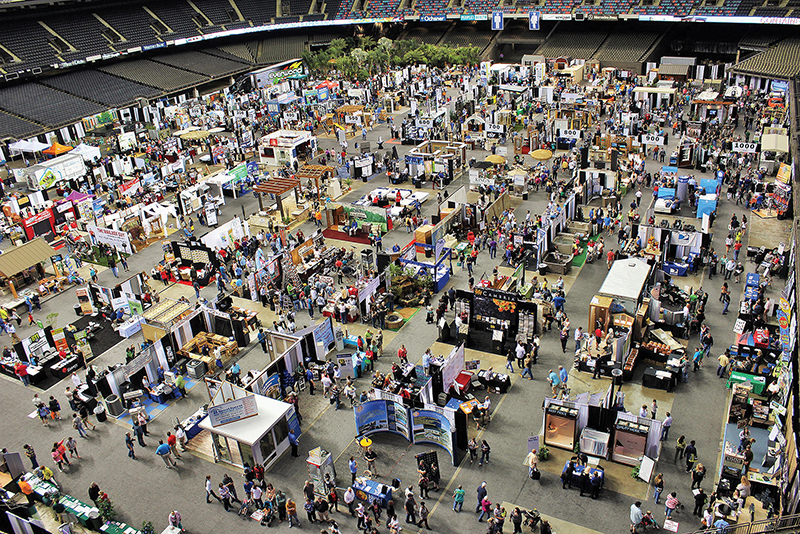