Cookin’ up Andouille in LaPlace

Like most Creole or Cajun food, Andouille sounds French but is influenced by various immigrant groups. Yes, the French and Acadians had a powerful hand in its current form, but the Germans of the German Coast brought the strong tradition of making sausage and Native Americans, Spanish and Africans all brought their own spices and flavors to the Louisiana staple. Andouille is as representative of the state and country’s diversity as the melting pots it’s often thrown in.

That original American experimentation is the biggest change Andouille has undergone. The French first made the sausage by stuffing chitterlings and tripe inside of an intestinal casing, or intestine inside more intestines, but the redundancy of the French immigrants’ Andouille got to the clientele of the New World of Southern Louisiana.

“[The French immigrants] were trying to figure out some way to make a staple they could sell, so they started putting everything from pork meat to beef meat to chicken meat to anything they could inside of the casing and started smoking it,” said Aaron Lion, the fourth generation owner of Jacob’s World Famous Andouille and Sausage in LaPlace, Louisiana that opened in 1928. “That’s basically how it started on our side of the family.”

Jacob’s is one of three butcher shops famous for Andouille in LaPlace, the ground zero of the Louisiana sausage. Bailey’s sits in the busiest strip mall in the town next door to Jacob’s, and Wayne Jacob’s, unaffiliated to Lion’s store, rests two miles away near the river. Of the three Jacob’s is known as the smokiest, Wayne Jacob’s claims the spice and girth, and Bailey’s finds a happy medium. All offer sausage as thick as a wrist, brown as tobacco, and steeped in pecan wood smoke. Their Andouille plumps and sputters loudly in a skillet.

The best accords to your preferences, though you might not be aware of what you like just yet. Most folks, even Louisianans, know Andouille as it’s sold in grocery stores: filled with phosphates that retain water instead of the meat for which you expected to pay. Good quality Andouille keeps it clean, it’s casing is thicker and more chewy at first than a regular sausage casing and offers only meat, spices, garlic and a good long sit in the smoker.

Though it took some tweaking to get to that recipe from the original French version, it has stayed pretty consistent. Nevertheless, every chef likes to leave a bit of a signature.
“The basic ingredients in our Andouille is pork, salt, red pepper, black pepper and garlic,” said Lion who is a bit more of a purist than others. “There’re people who do different type of smoking. There are some people who smoke with sugar cane, which gives it a little bit of a sweeter flavor. Paul Prudhomme, who died recently and was a famous chef, actually put potatoes inside of his Andouille as a filler. Everybody has a little bit of a different twist to it.” 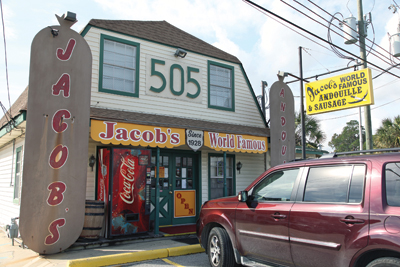 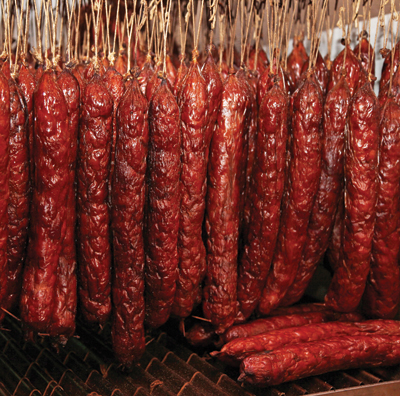 This continues the tradition of the early years of Andouille creation, as the different smoking techniques, types of meat used and grinds were beloved secrets that were rarely shared. But all of this play with the recipe circles around a customer expectation born out of early Cajun boucheries, where Cajuns’ butchered their hogs every year and prepared their sausage. Messing around too much back then would quickly earn a butcher or chef the ire of his community, and it still will today.

Meeting that customer expectation is what has kept these sausage institutions alive, because in this area shirking tradition is akin to blasphemy.

“Consistency is one of the things that has kept us in business so long,” Lion said. “I tell people if you like my product today, you’ll like my product tomorrow. If you don’t like it today, the only thing I can do is make something special for you. If you want more pepper and less salt, we’ll modify a special order for you. But as far as our everyday product goes, it’ll be the same every time.”

Locals, almost sommeliers of Cajun sausage, know their preferences. Adding too much fat, smoke or cooking with sugar cane can disrupt the trust that this one food has created within the community of LaPlace and Southern Louisiana. Lion said people drive from all over the country to pick up his family’s sausage, because to them it’s a taste of home and the comfort of the familiar.

In that spirit, now is the season for the French-German and fully Louisianan sausage — time of hunting camps, late-season football games and simmering pots and fired skillets calling for the flavorful Andouille sausage that never shirks its sense of tradition.

“As far as our everyday product goes, it’ll be the same every time,” Lion said. “That’s why if you go in this general area here, to LaPlace, we’re considered the Andouille capital of the world.” •