Retired this past June from South Mississippi Regional Center, a MS Department of Mental Health IDD Program where she served as director, Dorothy has been a licensed social worker for more than 25 years.

On Friday, September 18, 2015, one day after her 59th birthday, Dorothy will celebrate the 3:30 p.m. ribbon cutting of downtown Pass Christian’s newest gem – Robin’s Nest in the Pass.

Leo “Chipper” McDermott, mayor of Pass Christian, and Dorothy’s sisters Robin and Sally-Ann will join Dorothy at the ceremony to officially open the store and a new chapter in her life.

“I wanted a space to celebrate the creative process,” Dorothy said. “This is a business to channel the artistic experiences we all have. I want to sell gifts that commemorate milestones and achievements that include unique, original handcrafted art created by coastal and regional artists.”

Robin’s Nest in the Pass will showcase paintings, glassware, pottery, woodwork, decorative glass, silk jackets, jewelry and accessories with prices ranging from $3.95 for soapstone hearts to $1,500 for an oil on canvas painting by Pass Christian artist Wayne Harris.

Robin’s Nest in the Pass will also be home to the D. Roberts Collection, Dorothy’s own distinctive handcrafted fashion jewelry line. “I take natural stones, as well as vintage and fine Czech beads and Swarovski crystals, and set them together into unique pendants for necklaces, bracelets and earrings,” she said. “What I like most is making these pieces with quality gem-like materials with sterling silver or 14k gold overlay. I use a lot of freshwater pearls, and I’ve been told my jewelry has a Zen-like quality.”

Dorothy said she started making jewelry 12 years ago, after her divorce. A fan of Childcraft books when she was a kid, Dorothy was an DIY prodigy who could turn household items into purses and took great joy in being creative.

“My 2 sisters in the media starting wearing my necklaces and earrings on TV, and all of a sudden I was in business,” Dorothy said.

Her scintillating, yet affordable jewels have been displayed, and sold out, at Beau Rivage Resort and Casino in Biloxi, and will cost anywhere from $35 to more than $100 at Robin’s Nest.

“For my D. Roberts Collection I like using stones I find at new bead shops when I travel,” she said. “I like looking for just the right texture, color and size for my one-of-a-kind creations.”

After a rewarding career, working with people with developmental disabilities for more than a quarter century, Roberts thought she would open a Hallmark card shop. But her retirement dream came to have many facets.

About 18 months ago, when Dorothy drove by a “sweet little building,” located just 2 blocks from Highway 90 in downtown Pass Christian, her idea for a second career got a little polish.

“There has been a Roberts living here since 1975,” Dorothy, who currently lives in the original Pass Christian Roberts’ family home, said. “I thought I could sell my jewelry here, and sell other local artisans’ work at a store named in honor of my sister Robin who considers Pass Christian her hometown, too.” 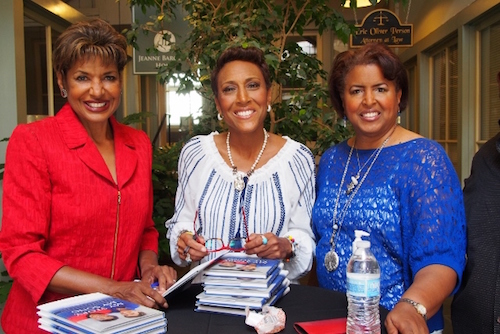 While Dorothy owns the store, which she’ll run with 1 full time and 2 part time employees, she said her family’s influence can be felt in every one the showroom’s 1,200 square feet.

“The gallery gift shop is my baby, but they were very much involved,” she said of her family. “Their involvement has been so important to me. The support and encouragement and mentorship they offered have been invaluable. Sally-Ann is one of my buyers. We went on a recent market trip to New York City together. And Robin, who’s stayed behind the scenes, provided such strong encouragement along the way. And my brother Lawrence in Houston, he’s been instrumental in keeping our family together since our parents passed away.”

“The logo for Robin’s Nest in the Pass is representative of the whole Roberts clan,” she said. “The 3 blue eggs represent the three sisters, and the nest holding us together represents my brother. This upcoming store opening is going to be a real celebration for our whole family.”

All original art will be sold on consignment at the store that looks like a work of art itself – its ceiling painted Robin’s egg blue, the door painted red, like a Robin’s breast, and tan walls trimmed in white.

Dorothy said the location was actually the original post office in Pass Christian and had since housed an auto parts store, an antique store, a soap manufacturer and now Robin’s Nest.

“ I worked with contractors and city officials,” she said. “It took a village to get this together.”

“Their assistance was really key for me,” she said. “They hosted free workshops and SBA leaders walked me through all the steps from creating a business plan to forming an LLC to obtaining a tax ID to opening a business bank account. Anyone thinking about opening a small business should seek out these resources.”

Dorothy used some of her lifetime savings to open Robin’s Nest, and acknowledges the enterprise is a risk, but said, unafraid, “no risk, no gain.”

She also advises other first time business owners to surround themselves with people who know more than they do, and to follow their passion. “When I started this endeavor, people just started to show up at my doorstep, and they were the right people at the right time,” she said. “Robin’s Nest has already changed my life.”

With “Passionate About The Pass” as the gallery gift shop’s unofficial motto, and a poem written by her brother Lawrence framed and displayed prominently on the wall, Dorothy is reveling in her entrepreneurial spirit.

“I told my brother he should sign his poem,” she said. “That way, we can sell it too!”

Robin’s Nest in the Pass

Nothing great is accomplished without

From building the pyramids to flying to

To great rulers, businessmen, even

Ambition is the helium for their armed

It carries them aloft regardless of

It shields them from disappointments

It turn thin skins into leather

As long as the eyes on the prize

Nothing is ever too far to reach

He who climb highest on the tree in

search of the peach