Lots of our employees have fathers and mothers, sons and daughters, siblings, cousins and in-laws that work at Crescent Towing or Cooper Mooring. Family means so much to our business.

Standing on the banks of Bayou Lafourche, Donald G. Bollinger saw an opportunity.

It was 1946, and southern Louisiana was in the midst of an oilfield boom. Bollinger had learned how to be a machinist building oil barges to support the Allies in World War II and he decided to put his skills to use and start a machine shop, constructing barges and work boats, as well as fishing vessels—it’s still south Louisiana, after all.

Bollinger’s company would go on to earn a major government shipbuilding contract, constructing and delivering just over a dozen 110-foot-long Island Class cutters to the U.S. Coast Guard. Because of the high level of quality and craftsmanship, as well as the company’s ability to reliably deliver on time and under budget, the government kept ordering more and more ships, and Bollinger Shipyards became a fixture in the New Orleans maritime industry.

In many ways, navigating the ins and outs of building a successful business is similar to navigating a river. There are many twists and turns along the way, but with the right course and a steady pilot, it can be smooth sailing.

In this instance, the river just happens to be 2,320 miles long and serves as one of the nation’s most critical economic lifelines.

When Bollinger got started, he knew the task was daunting, and like many of us when we’re faced with difficulty, he turned to the people he could trust most: family. He brought in his brothers — Ralph, a skilled mechanic, George, an expert welder, and Richard, a college graduate who would serve as the company’s president.

Starting and running a business with family members isn’t unique to Bollinger Shipyards or the maritime industry. Family businesses are the backbone of the American economy. That’s not hyperbole — 90% of all business ventures in the country are family-run, including 35% of all Fortune 500 companies.
Bollinger’s company would stay in family hands for generations. When Donald stepped down in 1985, his son, Boysie, became CEO. In the three decades that he ran the family business, he oversaw major deals and acquisitions that led to Bollinger Shipyards becoming the largest privately owned shipyard in the country.

In 2014 — after retiring from playing in the NFL and working as a welder, shipfitter, machinist, painter and project manager before taking on more administrative duties as a vice president and then as COO — Ben Bordelon, Boysie’s nephew and grandson of Donald Bollinger, took over as CEO. He became the third generation to run the company.

“Family means everything to me,” Bordelon said. “Something my grandfather instilled in me from an early age is that family is the most important thing in the world.”

Bordelon said that while the company is squarely rooted in history and tradition, he has his eyes set on the future.

“We have a lot of exciting projects on the horizon that will continue to push our industry forward and grow the footprint and offerings of Bollinger,” he said.

When it comes to building successful companies in the maritime industry, the secret to success seems to be hard work and strong family values. At least that’s what worked for Bollinger and another family-owned maritime powerhouse, Cooper/T. Smith Corporation.

In many ways, Angus Royal Cooper’s story mirrors Donald Bollinger’s. They both saw opportunities to put their work ethic and skillsets to good use while working on the docks.

The son of Scottish immigrants, Cooper had 13 brothers and sisters. In 1905, after working as a stevedore — a manual laborer who loads and unloads ships — Cooper started his own company, establishing a waterfront tradition that would be expanded by his sons and grandsons into the second-largest stevedoring company in the country.

The organization’s success would allow them to acquire and expand other companies, including Crescent Towing, a tugboat company that operates out of New Orleans, Mobile and Savannah.

But it wasn’t easy. When Angus’ son, Ervin, joined the family business, he also faced a daunting task. Seeking to expand the company to ports throughout the United States, he had to compete with the biggest maritime firms, an almost impossible task. But he did it with help from family.

His two sons, Angus II and David, made it their mission to grow the business across the world, and they succeeded. In turn, their sons, Angus III and David Jr., worked for the company after school and during summers and holidays as they grew up, learning the business from the ground up before joining the team as adults.

And it’s not just the Cooper family. The company values family working together in their operations.

“Lots of our employees have fathers and mothers, sons and daughters, siblings, cousins and in-laws that work at Crescent Towing or Cooper Mooring,” said Ben Morvant, senior operations manager for Crescent Towing. “Family means so much to our business.”

Running a business is hard, and running a business in a region that faces natural disasters and feast-or-famine boons regularly is even tougher. You need people you can depend on to make it work, so it’s no surprise that so many successful companies in the maritime industry were started by families and continue to be run by them.

It’s estimated that 90% of the world’s goods are transported by sea — roughly the same percentage of companies in the U.S. that are family-run. And because New Orleans lies at the mouth of the country’s largest river, with access to the world’s oceans, international shipping has historically been critical in the region’s economy.

With so much at stake, it’s good to know that the folks who work in the industry owe their success to and put their trust in family, the strongest of human connections.

“The maritime industry is the lifeblood of south Louisiana,” Bordelon said, “and we’re proud to be central to that for over the past three quarters of a century.”

DID YOU KNOW? The Mississippi River is the second-longest river in the United States and the fourth-longest in the world. 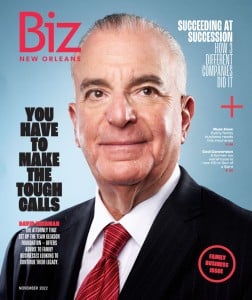