At home in her Marigny shotgun, 30-year-old Ashlee Arceneaux spends up to 10 hours every day in her front room with three things: a chalkboard, some chalk, and her cat Schmeowz.

It may be a simple setup, but Arceneaux’s artistic flair for lettering has drawn the attention of some big name clients. After just making the leap to full-time business owner early this year, Arcenaux’s work is already a notable fixture at bars and restaurants throughout New Orleans. Just a few of her clients include all three Dat Dog locations, all four Felipe’s Taquerias, Barcadia, Morning Call, Ruby Slipper, Mulate’s and Fair Grinds Coffee House.

She’s also done everything from inspirational quotes on school walls, to signage at an assisted living home, to work for events like Tales of the Cocktail.

With such high visibility, demand for Arceneaux’s creations has expanded to include custom wedding signage (which she says now makes up 25 to 30 percent of her business), painting and mural work, and digital illustration. Her handiwork can also be seen on the cover of the September 2014 issue of Louisiana Life Magazine.

Born and raised in the 7th Ward, Arceneaux says she’s been obsessed with lettering since she was a child. While she earned her bachelor’s degree in education at LSU, her big break into her future career didn’t come until one day, about six years ago, while working at Juan’s Flying Burrito.

“This guy had seen the signs that I had made for Juan’s and asked if I could do something for the restaurant he was about to open,” she says. 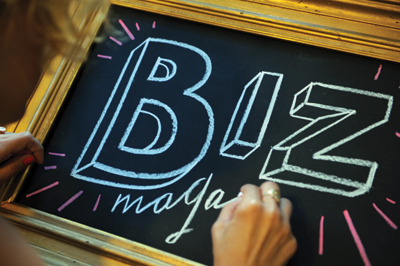 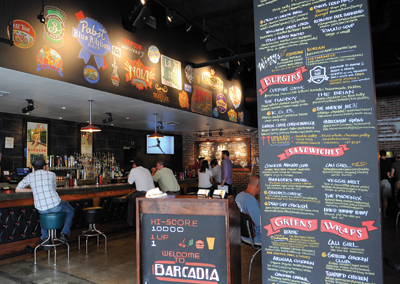 The majority of Arceneaux’s work comes from restaurants like Barcadia. 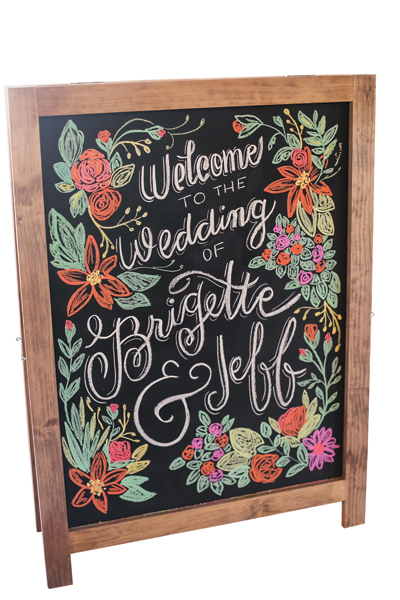 It was the first time someone offered to pay for her work, but it wouldn’t be the last.

For the next few years Arceneaux took chalk projects outside of her day jobs, the last of which was a full-time position as a store artist for Whole Foods.

“I loved that job. It was such a great company to work for,” she says. “But I knew that if I wanted to do my own thing, I would never have the time if I didn’t leave.”

So early this year she made the big leap – leaving a comfortable job at a large corporation to strike out on her own with her new company: Smallchalk.

Which leads to the first question that begs to be asked:

Arceneaux says she favors this favorite childhood medium for its flexibility.

“It’s very forgiving, and temporary,” she says. “It really fits my personality – I like switching things up a lot. It’s also very playful. It doesn’t take itself too seriously, just like me. Chalk lends itself to the way I look at art.”

An artistic free spirit, Arceneaux says she never measures anything.

“It’s all done with my intuition and eye,” she says.

“It was really scary,” she says, explaining that she gave up regular hours and great benefits for her current 10-hours-a-day work schedule with no weekends or paid vacations.

“It’s been worth it though,” she says. “In the next few years it will all pay off. I know it.”

“Well, I have a long last name, so I couldn’t use that,” she says. “So I started thinking up names and eventually I came up with Smallchalk. The chalk, of course, describes what I do, but the “small” part is a reference to me. I’m a small person.” (Arceneaux stands just five feet tall.)

“I wanted something short and to the point, something that just kind of flows off the tongue,” she says. “I like that it’s recognizable and people can spell it. I think those things are really key.”

While Arceneaux says she knows of three other artists around town that do something similar to her, she isn’t aware of anyone else doing it on the same scale.

“I’ve done pretty well branding myself,” she says. “When you type ‘chalk artist’ and ‘New Orleans’ into Google, Smallchalk is the first thing that pops up.”

“I don’t really market – other than I have a professional looking website,” she says. “I use Instagram to post pictures of my work, and I think that really helps. I also sign all my work with ‘Smallchalk’ or ‘Smallchalk.com.’ I think I have such a strong visibility that the work comes to me. I’m very fortunate that way. It’s all just word of mouth. Three or four years ago I was cold calling companies. Now those same companies are calling me.”

Whether it was through word of mouth or a Google search, somehow Acura found Arceneaux and proposed a monsterous undertaking.

During this year’s Jazz & Heritage Festival, the car company hired Smallchalk to create a giant custom mural on site. For 10 hours a day for three full days, Arceneaux and another artist she hired created a mural 31 feet long by 8 feet tall. The payout for the job was approximately $10,000.

One of the first challenges Arceneaux came up against with her business was one of the most basic – what to charge.

“I did a lot of work in the beginning for very little,” she says. “The problem is what I do is unique. There is no industry standard.”

Arceneaux says she didn’t like the idea of charging by the hour because she never wants to feel rushed with a project. She eventually settled on a rate based more on the size of the piece.

Another challenge she says she’s faced from the beginning is communicating the value and scope of her work.

“It’s amazing what good signage can do,” she says. “For instance, one of my clients was a coffee shop that had a little menu for sandwiches that an employee had just written out. They were selling a few sandwiches here and there.”

And then along came Smallchalk.

“After my menu went up they ended up having to bring in an extra person just to do the sandwiches,” she says.

You’d think that working in a medium like chalk, expenses would be almost nothing.

“I work a lot in permanent chalk,” Arceneaux explains. “They are actually called chalk markers and they aren’t cheap. Just one is about $10, and I always have to have a lot of colors, and backups easily on hand because I have to order them online and have them shipped.”

She also uses custom chalkboards, created for her by a local woman named Rebecca Stoltz. Many of the boards are created using reclaimed or found wood frames.

In addition to her work with Stoltz, Arceneaux calls on the skills of three other artists as needed.

“They each have a specialty,” she says. ”One, for instance, is really good with portraits.”

Another challenge of being a small business owner is there’s no such thing as the certainty of a fixed salary or set hours. By working for about 10 hours a day – with no weekends – she says she’s able to get her bills paid and save a little each month.

Arceneaux notes that she has been lucky; she has yet to hit a slow month. She says that so far her gross monthly revenue has been between about $3,500 and $5,500 per month. After expenses, her net is typically between about $2,500 and $4,000.

“I make a lot of lists,” laughs Arceneaux, when asked how she handles her constantly growing workload. “I break things down into what I have to do in the next two weeks, then for the week, then daily. I even make a list of what I need to accomplish by what time during the day to keep me on track.”

For bookkeeping, Arceneaux says she is currently using an online program called Wave, but she is about to switch to an invoicing app called Joist.

“It’s going to allow me to send invoices from my phone from wherever I am,” she says. “Plus it will automatically keep track of my monthly revenue.”

Plans for the future

Arceneaux’s future looks busy and bright. In the past month she married Brett Jones, the new market development manager at Dinner Lab, another creative small business gathering attention in New Orleans. Together they plan to buy a house.

“My most immediate future goal is to get out of my house – work-wise,” she says. “Ideally I’d like to have a retail space, somewhere I could sell custom signs. It would also be nice to have a space where I could have clients come to me.”

Further down the road, Arceneaux would like to expand into more of a company than a predominantly one-woman show.
“At some point I’d like Smallchalk to be a brand that’s known nationwide,” she says.