Edward Cox has a glitter in his eye and on his cheekbone, forearm and little pinkie.  This artist/designer cannot escape the ubiquitous New Orleans accessory as his work wholly depends on glitter, sparkly beads and all things shiny.

Cox owns Simply Stunning Designs. The company works as an umbrella for all the things this artist and Equity actor does from starring in his new commercials for the King Firm to designing the set for an upcoming production of “Hairspray.”  However, a quarter of his business focuses on creating masks, hats, wall hangings and wreaths. And this time of year, he specializes in everything the fashionable Mardi Gras lover might need.

He doesn’t have a shop or website but instead finds Facebook the best place to conduct his business. He often buys advertising on Facebook and shows examples of his work there. He sells his work nationwide, even Regis Philbin has been seen sporting one of his creations. He always encourages his costumers to consider having a piece custom made.

“I like to talk to my customers,” he says. “I want to create together and do something unique, something just for them. I want to discover a path the client might not have considered going down.”

Cox was born and raised into his business. His mother and aunts used to work for famed Mardi Gras ball gown designer, Lucia Liuzza.

“She had a two-story studio on Jeff Davis,” he says. “I’d go there when I was young and as my mother worked, I’d play on the floor with all the sequins and beads.” 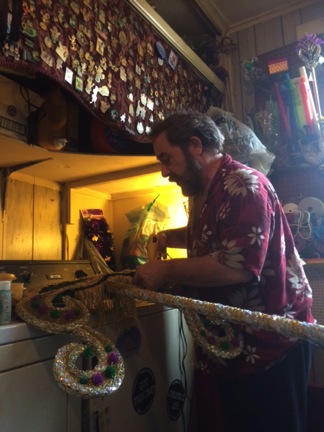 Cox buys most of his materials in bulk at such places as Jefferson Variety Store and Jo-Ann Fabric, but he also keeps an eye out for specialty sales and often hunts at yard sales.

He freely admits he may not be the best businessman around and if you put him behind a cash register his head just might explode, but he’s been in business for decades. That surely must be an accomplishment of his talent, drive and business acumen.

The very hardest part of his business, he claims, is finding the right price point. His larger wreaths go for $60 and the smaller ones for $45. He covers his costs but barely pays for the man-hours he puts into his creations.

“All of my creations have so many details in them,” he says. “But I worry if I price them too high, they won’t sell. It’s tough for an artist to quote a price on yourself.”

He dreams that one day he’ll open a storefront/studio. But for now, he is satisfied that he has a roof over his head and can pay all of his bills.