Short-term Rentals: What You Should Know

A look at the rules governing this newly legal income opportunity.

It’s a debate that pits neighbor against neighbor — literally.

“I have not talked to many people who are not hosts, who are not making money from it, who really like Airbnb,” says Andrew Legrand, founder of Spera Law, a firm focusing on small businesses.

And while the existence of short-term rentals isn’t historically new to New Orleans, advances in technology have made the practice of advertising, scheduling and operating a short-term rental widely accessible.

The number of short-term rental hosts in New Orleans grew rapidly starting around 2010. By the end of 2015, Airbnb estimated it had about 2,400 hosts in New Orleans. Residents complained about excessive partying and the loss of their neighborhoods, while concerns grew about the impact on the city’s limited residential market.

“The city government started having discussions in 2015 and that generated proposals for ordinances,” says David Groome, partner at Deutsch Kerrigan. “There was the idea that stuff like this had to be regulated, or it was going to be pushed underground — so why not regulate, tax it and control it?”

In December 2016, the New Orleans City Council passed a series of zoning ordinances to establish rules, regulations and taxation of short-term rentals.

Before the new ordinance went into effect on April 1, 2017, short-term rentals in New Orleans weren’t just unregulated, they were illegal. Legrand sees the new ordinance as an expansion, rather than a restriction.

“The ordinance that the council passed in the spring actually made the rules broader, allowing the activity that was disallowed before,” Legrand said.

A LITTLE HELP: The Host

For those looking to jump into the short-term rental business, local entrepreneur Brittney Greene runs a company called The Host designed to make your life easier.

The company offers everything from how to get started, help with licensing and getting online, to a designer to furnish a rental and service providers for maintenance, housekeeping and lawn care. For a fee of $35 per reservation, owners also have the option of offering their renters access to a guest concierge who will meet them at the unit and help plan all the activities during their trip. For more information, visit TheHost.com.

The ordinance divides short-term rentals (STRs) into three categories: accessory, temporary (for residential properties) and commercial. For each one, the owner must obtain the appropriate license — which comes with different rules and fees.

An accessory STR is one where the owner lives on the property full-time and rents out a spare bedroom, or, for example, the other side of their double.

There is no limit to the number of nights you can rent out the space, but there are other restrictions.

“You can’t rent out more than three bedrooms, and you can’t have more than two people in each bedroom, or a maximum of six people for the rental,” says Yvonne Chalker, a real estate lawyer with Elkins PLC.

“The basic idea is that if you’re the landlord, if you’re the owner of the property, you’re going to be there all the time, watching over your guests and hopefully being a responsible host,” adds Legrand.

For a temporary STR, the owner does not need to be on the premises while a guest rents out the house. You can rent out up to five bedrooms with a limit of two guests per bedroom, or up to 10 people for the property. The catch is that a temporary STR can only be rented for a maximum of 90 nights per year.

"The ordinance that the council passed in the spring actually made the rules broader, allowing the activity that was disallowed before."

This limitation prohibits investors from buying residentially zoned properties and running them solely as short-term rentals — responding to a concern of homeowners in especially popular neighborhoods like the Marigny and Bywater.

“That was certainly the intent of the ordinance, to help preserve neighborhoods,” says Chalker. “They’re trying to strike a balance between the ability of property owners to use their property in a way they see fit and, in some instances, could supplement their income, but to balance that with the concerns of the residents that don’t want their neighborhoods to turn into hotel districts.”

The third category is a commercial STR — unrestricted by the number of units or nights rented, the property has to be in a commercially zoned area.

For example, “If you’re a property owner and you have an apartment building with 20 units, and it’s in the CBD, you can have the entire building be short-term rentals and you can rent it out every night of the year,” says Chalker.

The French Quarter is the exception to all of the rules: there are no short-term rentals allowed in the French Quarter, save for a few blocks of Bourbon Street, which is considered to be an entertainment district and allows commercial STRs. 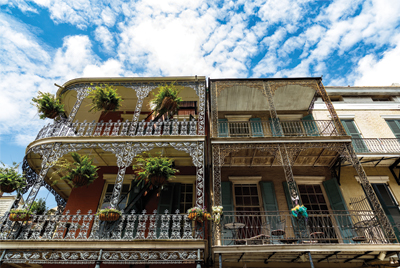 Legrand says one reason for this restriction is a decades-long hotel ban in the French Quarter and a concern that STRs would get around that ban.

He says the other reason is history.

“For centuries it’s been a residential area, a neighborhood, and I think the city feared that if they allowed short-term rentals into that area all you would see is people who had vacation homes and short-term rentals and it would become a giant tourist area as opposed to an area where people actually live in and work,” he says.

Groome says the French Quarter restriction has left some property owners having to foot the bill for renovations they hoped would be offset by short-term rental income.

“I personally saw a couple of properties that had wood and dirt floors because they hadn’t been kept up in years,” he said. “They were renovated, put into commerce as an Airbnb or VRBO, and then the city came out with this ordinance. So some of those people had to go ahead and sell some of their holdings” to cover renovation costs.

The licensing fees and taxes collected on registered short-term rentals have allowed the city to hire six enforcement agents. The Short-Term Rental Administration works under the Department of Safety and Permits, and is responsible for licensing of short-term rentals, along with enforcing standards and regulations.

STR applicants must show that they have $500,000 in liability insurance on the property, working smoke detectors, fire extinguishers, posted emergency contact information and compliance with all city building codes.

New Orleans actually has an interesting ally in the regulation effort: Airbnb. The company has signed an agreement with the city to provide certain data — like permit numbers and number of nights rented — to help with enforcement. Airbnb now also collects and remits taxes to the city of New Orleans on behalf of its users.

As for non-compliance, the city can hit owners with a fine of up to $500 per day for a violation, and if the violations persist, they can revoke your license, put a lien on your property, or have your utilities cut off.

All in all, the consensus seems to be that things are moving along fairly smoothly so far.

“This is a brand new industry, not just for New Orleans, but every city across the globe,” Legrand says. “So I think they’re all trying to figure it out, and looking at what other cities have done, I think New Orleans has done a pretty good job.”

THINGS TO CONSIDER: Would Short-term Renting Work for You?

Andrew Legrand specializes in licensing and zoning at Spera Law. He says there are a few things people need to think about when they consider becoming a short-term rental owner/operator.

First, do the math. People may think they can make more money off a short-term rental with a higher nightly rate than a monthly tenant, but “what people don’t realize is that a long-term renter pays utilities, and in a short term rental situation you’re going be stuck with $200 a month in utilities — so that’s another $2,000 to $3,000 per year that you’re going to wind up paying as a short term rental host that you don’t think about.”

Next, consider your insurance. If you’re planning to have a short-term rental, make sure your homeowners insurance covers that use. Also, consider insuring the contents of the home. “If you’re a short-term rental host you’ve got some money invested in the furniture in the house, so contents insurance might be something you typically expect a tenant to pay for, but that a landlord may want to pay for, too.”

Finally, determine your tax implications. Rental income is subject to self-employment tax. When you rent on Airbnb, the company sends hosts a 1099, the tax form used to report self-employment income. “When people are comparing the numbers of this is how many nights I can rent a year, this is what I can get on a monthly basis, they’re usually not considering the additional income tax burden on that.”

“Figure out what you can earn, and include things like taxes and utilities, cleaning, maintenance, furniture, etcetera. Compare that, and that’ll give you a more accurate picture of if your property’s worth more as a short-term rental or if it’s worth more as a long-term rental.”