“Charlie, who I got from the LA/SPCA in July 2005, is a New Orleans black and tan part Sheltie, part Chow and all love,” she said. “He has traveled the country with me and is an excellent therapy dog to all my foster animals. He really does all the work and is the sweetest dog you will ever meet. My newest addition is Max who is a 2-year-old mixed breed, probably Poodle and Maltese. He is all puppy – full of energy and a complete love bug.”

Shapiro’s affection for canines is only rivaled by her drive to fundraise for one of her favorite nonprofit organizations, the LA/SPCA. As 2015 co-chair of the 37th annual Howling Success Patron Party & Gala, that takes place Saturday, November 7, 2015, at the Hyatt Regency Hotel’s Celestin Ballroom, Shapiro is ready to unleash her inner “Charlie’s Angel” at the festive event that will raise a significant portion of the LA/SPCA’s annual budget.

This year’s theme, “I Heart the 70s,” will serve as a far out, tail-wagging tribute to the 33,000 animals cared for by the LA/SPCA every year.

“I have always loved animals and had many growing up, but in college I developed my dedication to rescuing animals and have been volunteering with the LA/SPCA since 2003,” Shapiro said. “I worked as a vet tech from 2003 to 2005 when the shelter was on Japonica Street. I served several different roles as an LA/SPCA volunteer from photographer to fundraiser, to foster parent to more than 15 dogs over the last 10 years. I have chaired several functions for the LA/SPCA and served on the Howling Success Committee for many years.”

Chartered in 1888, the LA/SPCA is the oldest and most comprehensive animal welfare organization in the state. As an open admission shelter, the private 501(c)(3)’s mission is to advocate for the animals of Louisiana by advancing their welfare, promoting their interests and fostering the human-animal bond through innovative programs, education and services. Their guiding philosophy is to provide a safe haven for all homeless creatures, and their guiding principle is to improve the quality of life for all the companion animals they assist, whether they’re furry, feathered or hoofed. 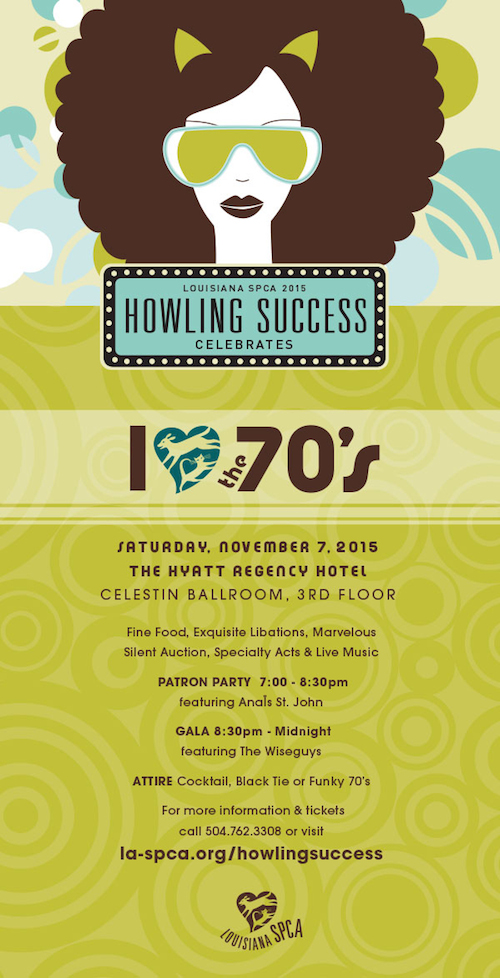 LA/SPCA reps said it costs $15 for a microchip for a shelter animal, $25 for a health certificate for an animal transported for adoption, $50 to give a dog an annual exam and $100 to spay or neuter a shelter animal before adoption.

Dedicated to the prevention of cruelty to animals and to the promotion of respect and humane care for animals, the LA/SPCA, in 2014, provided more than 7,100 spay/ neuter surgeries, impacted thousands of children and adults through Humane Education programs and provided more than 6,000 low-cost clinic services through the area’s only high-volume affordable spay/ neuter Community Clinic.

The Louisiana SPCA is currently ranked as a 4-Star nonprofit by the well respected Charity Navigator.

Howling Success will kick off with a Patron Party at 7:00 p.m. featuring a performance by Anaїs St. John. The Gala will roll-over from 8:30 p.m. to midnight with an estimated 1,000 attendees enjoying live music by The Wiseguys, “dyn-o-mite” food from more than 25 New Orleans restaurants, a groovy silent auction and a boogie-down performance by Club Silhouette dancers and the Disco Amigos.

The winner of the 2015 Howling Success Dorothy Dorsett Brown Humanitarian Award will be announced and presented to a rare breed individual or organization that demonstrates incredible compassion and charitable work within the human community as well as passionate advocates for the humane community of companion animals. In 2014, The New Orleans Advocate was chosen for the Humanitarian Award for their work covering animals’ issues, for being a media sponsor for major LA/SPCA events and for enforcing the intact ordinance in animal ads.

Guests are being asked to wear Barkin’ black tie or cocktail attire, a ruffled tux, a formal 1970s gown or their best 70s themed costume.

To put your paws on an Howling Success silent auction item, bids can be placed in advance of the Gala here.