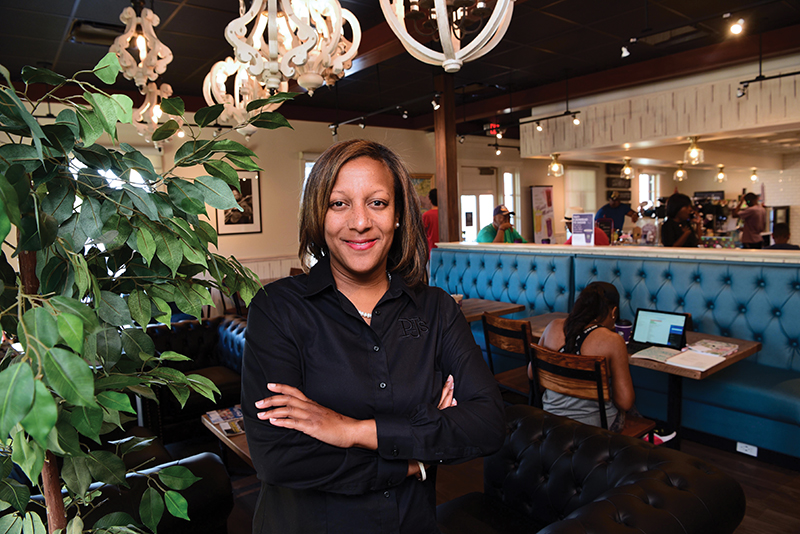 When Stephanie Chambliss and Elwood McCoy, co-owners of PJ’s Coffee on Read Boulevard, decided to open their coffee shop in May, it was to provide customers with a home away from home.

“This was a project in the making for over two years,” Chambliss said. “We wanted to open the business in this area because it is much deserving and overdue for a place where residents and visitors can work, study and relax. PJ’s being located in New Orleans East signifies economic growth and development.”

Chambliss and McCoy, who are both deeply rooted in the community, understand the needs of the area. Chambliss graduated from Eleanor McMain Magnet School in 2001, and McCoy graduated from McDonough 35 in 1996. Chambliss lived in New Orleans East during her high school years; she purchased a home in the area after Hurricane Katrina; and she attends church in New Orleans East.  “I was a frequent visitor of coffee shops, and every time I wanted to conduct business outside of my home or commercial office, I had to go to Gentilly, Mid-City or Metairie,” Chambliss said. Acting as a leader for economic growth, the success of their new business venture will determine if other corporations decide to enter the New Orleans East market.

“We believe that economic development in the area will be improved with the success of our store because companies will then realize that there are residents with disposable income in New Orleans East,” Chambliss said.

The business partners chose the site at Read Boulevard between Bullard and Crowder boulevards as the perfect locale for a PJ’s Coffee thanks to its proximity to I-10. The building already had a drive-through, and it’s at the epicenter of New Orleans East with several of the city’s largest churches nearby.

As for challenges, Chambliss said that people sometimes view New Orleans East with negative perceptions, stigmas and preconceived notions. “We aim to overcome those challenges by sharing with the world how great our experience has been since we opened our doors,” she said.

Part of the positive experience has been working with the Urban League of Louisiana’s Office of Workforce Development for assistance in recruiting and training potential employees. Chambliss and McCoy reached out to the organization to help initial applicants have additional training to improve their job readiness. As a result of the joint venture, they hired nine of the 16 program participants.

“The employees who are still with us are doing extremely well,” Chambliss said. “As a matter of fact, one of the program graduates, Kelsey Webster, was awarded Barista of the Month.”

Chambliss and McCoy currently employ 18 team members — most of whom live in New Orleans East — and they serve about 260 customers per day. And there are a number of reasons their location is unique.

“We aim to offer our patrons excellent customer service and an experience that they will not receive anywhere else,” Chambliss said. “Our store is much larger than the typical coffee shop; we can actually seat up to 55 people. We offer a private meeting room space with a smart television and a white board, and we offer a community board where residents may promote their businesses and events.”

“We want to contribute positively to the New Orleans East community by partnering and nurturing relationships with local schools, churches and non-profits,” Chambliss said.

Looking toward the future, Chambliss and McCoy hope to expand to a second location, create a database of small businesses and increase community relations.

“Elwood and I, along with the entire PJ’s Coffee family, are excited and honored to serve the people of New Orleans East,” Chambliss said.