NEW ORLEANS — Second Harvest Food Bank is about to mark its 40th anniversary by unveiling a $15 million overhaul of its headquarters at 700 Edwards Avenue in Elmwood. The improvements, paid for by a multi-year capital campaign, include a new roof, additional air conditioning, new bathrooms with showers, a new kitchen, a multipurpose meeting room, extra offices and an employee lounge built to accommodate meetings.

The food bank’s 6,500-square-foot kitchen is now capable of producing 15,000 meals each day. The new roof and air-conditioning will create a better working environment for staffers and volunteers, and the showers will help during major weather events, when workers and emergency personnel shelter at the facility. 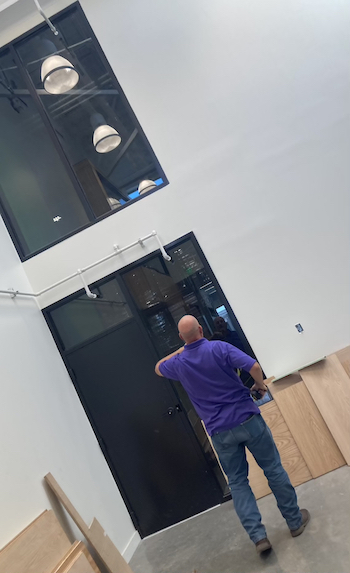 A worker takes measurements as he prepares to hang art in the nearly complete lobby at the Second Harvest headquarters.

Eskew Dumez Ripple is the project’s architect. DonahueFavret is leading the construction.

“We needed air conditioning. We needed a new roof. We needed more space to hold volunteers, and we needed another line in our kitchen for local farmers to come in and do some value-added processing,” said Natalie Jayroe, Second Harvest president and CEO (and guest on this week’s Biz Talks podcast). “People are always shocked when I tell them that I am so happy about these bathrooms because they have showers in them, but it’s really because it allows us to turn this into a dormitory in a worst-case scenario.”

A new entrance to Second Harvest’s 200,000-square-foot facility will feature a wall of video screens and a giant black-and-white photo of Archbishop Philip M. Hannan and other founders of the food bank. Enhancements to the complex’s commercial kitchens will allow for more efficient meal prep, packaging and delivery. The hope for the new multipurpose meeting space, meanwhile, is that it will be rented to outside groups to generate income.

Overall, the new-and-improved facility reflects the growth that Second Harvest has experienced over the last decade and a half.

Now, Second Harvest’s 122 employees and roughly 10,000 annual volunteers work with more than 700 partners in 23 south Louisiana parishes to distribute the equivalent of 50 million meals to families in need each year. Jayroe said the capital improvements have been designed to increase that capacity in a state where 400,000 Louisiana residents are designated as at risk for hunger.

“We are so excited,” she said. “When I got here, right after Katrina and Rita, we were in a 30,000-square-foot building. We used to call it operating a Super Walmart out of a 7-Eleven. It really was a safety issue. After Katrina and Rita, we had become the largest food bank the world had ever seen, so that was quite interesting at such a small facility.”

A Sept. 26 tour of the nearly complete renovation revealed a hub of activity spread across an impressive footprint.

Outside the floor-to-ceiling glass windows of Jayroe’s office, forklift operators in an expansive warehouse transported pallets loaded with boxes of food. In the nearby kitchen, a dozen or so volunteers and staffers prepared plate lunches for schools and assisted living facilities. In an adjacent kitchen area, two local farmers were dreaming up ways to use a bounty of fresh okra. One was cutting the nutritious plant on a bias to make “okra chips” in the facility’s dehydrator, while her colleague was slicing it for storage in shrink-wrapped packs.

In administrative offices on the second floor, meanwhile, Second Harvest staffers were busy at their desks, no doubt keeping in contact with some of the nonprofit’s hundreds of volunteers, partners and benefactors. 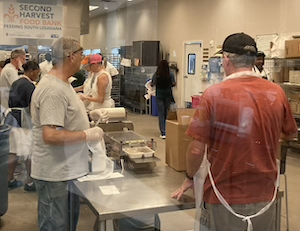 Amid all this, construction workers were putting finishing touches on the new details of the space: taking measurements before hanging the giant photo in the lobby, finishing installation of cabinets in the new employee lounge and completing exterior details.

Ultimately, all the individual efforts are directed toward the same goal.

“The principle behind food banks is that Americans throw away 40% of everything we grow, manufacture, process and prepare across the country,” said Jayroe. “And food banks grew up as this kind of intermediary to get this incredible abundance of nutritious food into the hands of people that can use it. But in order to do that, you have to have a warehouse, and you have to be able to accept truckloads of food. … So now in this facility, we have 40,000 square feet of freezers and coolers. And that’s absolutely critical to making sure we get the most nutritious food out to people who need it.”

The food bank will unveil its renovation at a private Oct. 7 event.

Click here for information about volunteering or donating to Second Harvest.