A taste of New Orleans’ holiday dining and entertainment business

New Orleans is no stranger to festivities, and the holidays are just one of many times of the year the city chooses to celebrate extravagantly. Restaurants, entertainment venues and catering companies providing for office and other holiday parties find this time of year to be one of the busiest, if not the busiest season, even with stretches like Carnival and spring festivals taken into account.

Seeing how some local businesses operate and boost revenue around the holidays offers a glimpse into the landscape of dining and entertainment in New Orleans at this festive time of year.

As soon as one holiday season comes to a close, Ralph Brennan Restaurant Group almost immediately starts year-round preparations for the next year’s holidays. For some, visiting a Brennan’s restaurant during the holidays is a long-standing tradition, so the restaurant group automatically holds dates for those parties. Then they send out confirmations to those parties’ organizers as early as February. The majority of private party bookings come through in late summer.

To drive revenue, Brennan’s restaurants focus on holiday parties, which are often big ticket affairs, and specialized holiday menus, such as a three-course chef’s choice menu in place of the traditional a la carte. These menus may feature ingredients like truffles, which may not appear on the usual menu.

To maximize their ability to host more private parties, Brennan’s restaurants will use every square inch of their properties, which means events may be held even in the restaurants’ bars, Williamson says.

“We’re still always keeping the concept in mind and knowing the people who come to Brennan’s or Ralph’s on the Park – they have an affinity for the place and the food, so you can’t stray too far from that,” said Executive Vice President, Charlee Williamson. “You want to still deliver the Ralph’s or Brennan’s they know, but you just try to elevate it on this special day.”

As of November, Ralph Brennan Restaurant Group had already booked as many events for the 2015 holiday season as they had at the same time last year.

Messina’s Catering & Events was founded out of Messina’s restaurant in Kenner, established over 30 years ago, and the company now spends its holiday season catering dozens of private parties and events in a variety of locations. The business rakes in about 15 to 21 percent of its annual revenue during the holidays.

Diversification is one key to Messina’s success, according to co-founder Stacey Messina, as the company works off-site for many events while also hosting events at its own venues, like Messina’s at the Terminal at the Lakefront Airport.

“We diversify ourselves to where we are very flexible,” said Messina. “There are many venues where we can cater, and that helps drive our business – where we’re not just one catering venue, not just selling these three holiday menus. With our flexibility, we’re able to service more clients.”

That flexibility extends not only to operations but also to the catered menus themselves. Messina’s customizes each event’s menu based on a client’s food preferences, what restaurants they patronize, and any other factors that might influence a client’s expectations for an event.

“The way we operate, it’s not just emailing a menu,” said Messina. “We really like to talk to the client and get as much information as we can about what they expect, so we have a happy client in the end. Word of mouth is the best advertising.”

Messina said that more clients now consider themselves knowledgeable about what good food is and expect restaurant-quality dishes served at catered events. Menus have moved beyond traditional Louisiana and Creole dishes and now include Asian, Vietnamese and fusion items as well as tapas bars, farm-to-table appetizers and healthier options.

These menus help Messina’s stand out amidst increasing competition from not only other catering companies, but also grocery stores that are opening their own catering departments.

Group events, seasonal parties, private classes and large family gatherings always drives revenue for the New Orleans School of Cooking, but during this time of year it intensifies. During the holidays, the school sees an average of seven classes per day and sometimes upward of 10 or 11.

The holidays are a prosperous time for the school, but the busy season actually begins in October. And this year, Christmas came early—classes were already thoroughly booked starting in September. Retail manager Becky Hebert said strategic marketing that involves participating in local events and approaching hotel concierges helps get the school’s name out.

“I have lots of families and large groups come in who want to do something different and get out of the house for a bit,” said Hebert. “So they will book their own private classes to come in and do the demonstration, then go out and enjoy a day in the Quarter after that.”

In the demonstration classes, the school doesn’t tend to get into holiday-specific menus, choosing instead to keep to its roots with tutorials on jambalaya, chicken and sausage gumbo, and bananas Foster. But for private events, sometimes different recipes will come into play, where the school may throw in some more seasonal dishes, such as pumpkin bread budding.

In addition to demonstrations and private parties, the school’s retail store sells custom gift baskets and gift certificates to people who want to give the gift of New Orleans cooking for the holiday season.

What makes these cooking classes desirable for groups and gift-givers is often the New Orleans touch that can be heard, tasted, smelled and felt throughout what Hebert calls “very personal experiences.”

Many of the chefs are not just masters of their cooking craft but also licensed tour guides who inject history, culture and, most importantly, laughter into each demonstration and private party. Hebert feels this is why so many people, locals and visitors alike, return again and again, particularly during the holidays.

Sticking With What Works

Over the holidays, locals and visitors considering a trip to House of Blues can expect to find some holiday preparations, such as decorations in the Foundation Room or Christmas lights in the Voodoo Garden. But mainly, the venue likes to stick to what it does best during any other busy season, such as Carnival or festival season, according to Promotions and Marketing Manager, Ashley Sutton.

That’s not to say the holiday cheer is by any means lost on House of Blues, as the venue introduces seasonal dishes and cocktails to its restaurant menus, and the weekly Sunday Gospel Brunch features traditional holiday tunes. House of Blues also participates in a handful of charitable contributions, such as this year’s Babes in Toyland for Foundation Room members, who will be encouraged to bring toy donations for Toys for Tots.

But beyond that, House of Blues knows what works during all of the busiest times of year and tends to implement the same plans.

“We try to keep it as traditional as possible because holidays can be overkill with starting [holiday] music right after Halloween,” said Sutton. “Other than that, it’s really no different than any other time we’re getting ready for a festive season.”

Where revenue-driving holiday tactics do come in for House of Blues is in marketing itself as both a venue for holiday events and depicting “the overall experience of coming to House of Blues as a present,” said Sutton. Whether that means giving concert tickets to a music lover or a gift card for House of Blues’ restaurants or retail store, highlighting the overarching experience the venue offers is where this multifaceted entertainment venue sows its holiday successes.

“December is definitely one of our better months not just because of the traffic, but also because of the holiday parties and concerts,” said Sutton. “We are a venue where you can bring the whole family and enjoy various parts of our business, not just the music.”

The holidays are an important time of year for New Orleans businesses, particularly the restaurants, venues and catering companies that put on the holiday events and serve the holiday foods that locals and visitors come here to experience. It may not be Mardi Gras, but the holidays are still a strong revenue producer, as even the winter air can’t keep people away from this celebration-friendly city.

Reveillon dinners are a tradition for New Orleans restaurants around the holidays and may be served on Christmas Eve or New Year’s Eve, or in the weeks leading up to both holidays. From the French word for “awakening,” Reveillon dinners were traditionally hosted after Midnight Mass on Christmas Eve and on New Year’s Eve and were an opportunity for families and friends to celebrate the holidays together.

Keen on respecting local traditions and serving those who would prefer not to cook their own holiday meals, New Orleans restaurants adopted this beloved holiday custom. They now use the opportunity to showcase their chefs, usually with a set three- or four-course meal served on certain days and times. Local restaurants have created a wide range of Reveillon menus, ranging from traditional holiday fare to the restaurant’s signature dishes. They often charge a premium for the special meal. 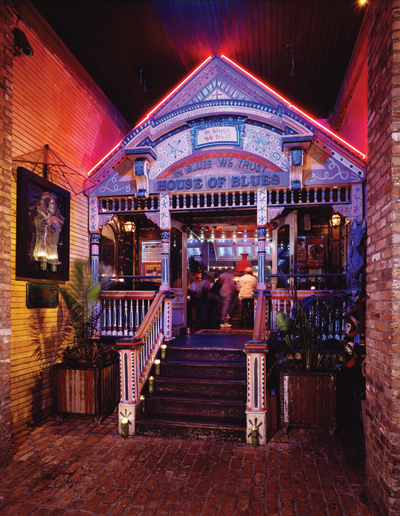 House of Blues introduces seasonal dishes and cocktails to its restaurant menus, and its weekly Sunday Gospel Brunch features traditional holiday tunes to celebrate the season.

An estimated one-third of consumers say they seek out seasonal menus when the holidays roll around, which is why many restaurants, venues and catering companies adopt seasonal offerings — from appetizers to desserts and cocktails. Around this time of year, “holiday” flavors like pumpkin, cranberry, cinnamon and nutmeg adorn many dishes.
Sometimes holiday menus aren’t just about certain flavors but also eating a more lavish meal in celebration. For some restaurants and private parties, that could mean offering a more expensive four-course meal instead of a traditional three-course meal, or setting up a tapas bar instead of a carving station at a catered event. Holiday splurges often also come in the form of dish selection, such as springing for filet mignon instead of just chicken. 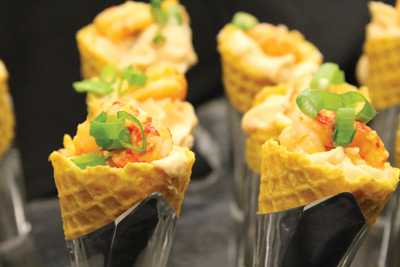 According to the American Beverage Licensees, the estimated economic impact of the alcoholic beverage industry was more than $245 billion in 2014. The Adams Liquor Handbook found that while sales of spirits from January through November average 7.9 percent of the annual total, in December, that number rises to 12.7 percent.

As a result, alcohol sales are often critical for driving revenue at restaurants, entertainment venues and catering companies over the holidays.

A survey of Ralph Brennan’s restaurants’ sales managers found that hosts are requesting more tray-passed cocktails at the door, which Executive Vice President, Charlee Williamson, believes is a sign of a robust event where hosts tend to splurge to set the tone from the moment guests arrive. Businesses may also choose to offer seasonal cocktails that pique the interest of guests looking to add some holiday cheer to their glass. 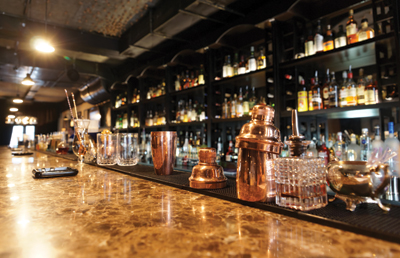