Is Virtual Reality (VR) finally here? Verizon recently sent over Samsung’s “Gear VR” headset — a virtual reality head-mounted display released in collaboration with Oculus, one of the pioneers in VR headset makers. What may not be obvious is that the release of this device coincides directly with the release of Samsung’s flagship line of phones (Note 5, Galaxy S6 / S7) – as the Gear VR won’t work with any other Android, let alone Apple, device. VR technology has reached a point where the typical consumer will be truly amazed at the VR experience, but having the technology shackled to specific devices will hinder the overall appeal and ease of accessibility for a lot of us.

Think of the Gear VR as being akin to a pair of ski goggles on steroids. The device doesn’t have any display screens in and of itself, but works in conjunction with a Samsung phone to display the virtual world to the user. The physical construction of the device is solid and well thought-out. It uses quality materials that make the device light enough for long-term use, even with the added weight of the phone.

Here’s where we see some of the issues with such new technology. After the initial amazement of being enveloped in a world that’s eerily close to reality, you notice that the quality of the images you are seeing aren’t really HD. This is due to the fact that while the phone’s screen you are using is HD, the images are magnified (via lenses inside the Gear VR) to the point where the effective resolution looks less than HD. There are other VR devices out there that have extremely high resolutions built into the device itself so that no magnification is needed, and in those cases what you are looking at is actually HD. But of course those cost way more than the $100 you’d spend on getting the Gear VR. In the future, all VR headsets will have built-in screens. The reason Samsung chose to go with a device that uses a phone as the display was purely to drop the cost to the point where more people could afford it. 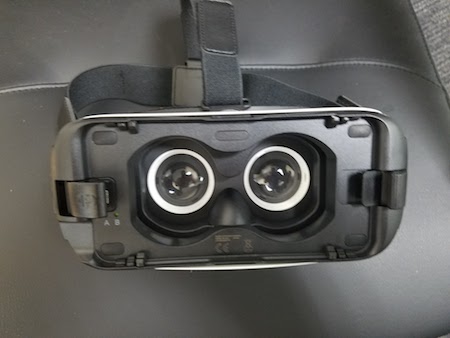 Unfortunately Samsung decided to go with a proprietary app that launches automatically when you insert your Samsung phone into the Gear VR headset. While not the best solution, it does keep new users on a tight path, allowing Samsung to dictate what the user can and cannot do. Once launched, you are brought into the Samsung ‘theater’ where you have various choices on what you can do. Compared to other VR software options out there, however, it does an admirable job of letting you do most everything you need to do without taking off the headset and jumping in and out of the app to get to what you want. The downside is that you miss out on literally hundreds of stand-alone VR applications that are not specifically tied to Samsung’s ecosystem.

Interaction is a bit tricky. The Gear VR doesn’t have any depth tracking, which means that you can’t move into and out of the VR world by moving your head or body forward or backward – it only tracks where your head is looking. Actually, most apps are designed for you to use while sitting in a swivel chair ideally, but some extreme motion apps (like roller coaster simulators) may leave you feeling a bit disoriented. Physical interaction with what you are looking at is achieved by using a touch-sensitive directional pad on the side of the device; think of it like using the arrow keys on your keyboard to navigate on your PC – same principal. It’s an adequate solution, but I found myself constantly touching the wrong key(s) because there’s very little physical button definition letting you know what you are touching before you actually touch it. I often selected the wrong item or went the wrong direction because I was fumbling around on the side touchpad trying to figure out what was what (remember you are blind to the outside world once you put the headset on). However, as a bonus you are able to pair a (some) Bluetooth controllers for (certain) applications (First-person shooters, etc.), which makes navigation much easier. 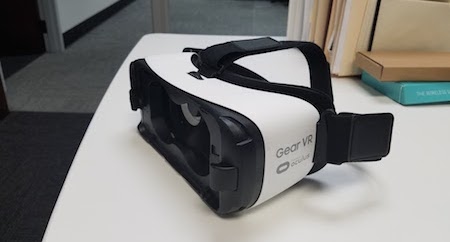 *Inexpensive. Granted you can get Google Cardboard headsets that work with a much broader range of phones for much less money (and I’d recommend doing so if you just want to dip your toe into the VR world), but you won’t get nearly the same immersive feel and interaction options as with the Gear VR. Samsung will likely have tie-in promos on future Gear VR devices each time they launch a new phone.

*Good quality for the price. For $100 you’d be hard-pressed to find a better head-mounted VR display.

*Powered by Oculus. Oculus is a company that’s pioneered VR headsets since 2012. The VR world that they designed in conjunction with Samsung is one of the better ones I’ve experienced, especially when it comes to easing new users into the world of virtual reality.

*You can charge the phone via the Gear VR. It has a micro USB slot on the side so you don’t have to worry about running down your battery when watching movies, etc.

*Disorienting. For many people, VR headsets can be disorienting, even to the point of being uncomfortable. If you have issues with vertigo or just balance in general, you do need to use caution when putting them on for the first time. Start off with simple apps or just viewing video clips.

*Eye fatigue. I tried to watch a few shows on Netflix, but after about 15 minutes if felt like my eyes were straining. I’m not sure if it was a physical or mental thing (or if it’s just me), but it’s almost like your brain knows it’s being fooled, and is trying to compensate somehow.

*Not HD. With all the HD, 4K, 8K and other life like images we are used to looking at on displays, looking at a lower-quality resolution for such a long time (epically one that takes up such a large field of your vision) just feels…weird.

*You’ll look ridiculous using it. Sorry, no way around this.

While virtual reality head-mounted displays have been around for a while, I give credit to Samsung for introducing us to a relatively cost-friendly VR headset with the Gear VR. Remember, this could be considered just version 1.0, things are only going to improve over the years. I don’t normally like closed application eco-systems and proprietary hardware that only runs on some devices. I’ll make an exception in this case however – doing so does make it easier for the public to use such a new, and frankly revolutionary, technology. Will this device change your life forever? No. Will you use it for months and years to come? No (like mobile phones, something’s better is always around the corner). Will it knock your socks off the first time you experience it? Heck yes. With every person I’ve strapped the device on and sent them on a roller coaster (literally and figuratively) the response is always the same: