From serving up gas and electricity to luxurious suites and fresh local cuisine--a look at the reinvention of NOPSI.

The latest in the city’s long list of historic renovations, this $50 million-plus project represents the transformation of a building that first opened 90 years ago as New Orleans Public Service Inc. — more commonly known as NOPSI.

NOPSI served as the city’s gas and electric company from 1922 until 1983, but the nine-story brick building perched in the Central Business District was also a site where public transportation was managed and merchandise — like kitchen appliances and cookbooks — was sold. Somewhere during its long history NOPSI even hosted cooking demonstrations.

After decades left vacant, Connecticut-based real estate developer Building and Land Technology (BLT) purchased the building in 2015.
In its new form, The NOPSI Hotel is managed by Salamander Hotels & Resorts, a privately owned and operated company based out of Middleburg, Virginia, founded by entrepreneur and philanthropist Sheila C. Johnson in 2005. NOPSI is the company’s seventh, and latest management project.

The employees who worked at New Orleans Public Service Incorporated would share recipes — sometimes tied to the kitchen products the company sold.

“They would say, ‘Oh, I just got this mixer and I was able to make this recipe,’ so it was a very smart marketing and merchandising tie-in,” says Ellen LeMaire, the hotel's general manager. Eventually, NOPSI collected the women’s recipes and printed a cookbook.

In yet another nod to its history, The NOPSI Hotel decided to redistribute these recipes to guests. As part of the hotel’s turn down service, instead of finding a chocolate on their pillow in the evening, guests receive a recipe from the NOPSI cookbook.

The hotel had the original recipes rewritten by hand and printed on notecards. Each recipe card includes a spice pack created by NOPSI’s chef to enhance the finished product.

“What’s nice is if you’re here for more than one night — which we hope you are — we have five different recipes,” says LeMaire. “So each night guests get something different, and hopefully find a recipe they like to cook.”

The original NOPSI cookbook has been out of print for years, but the recipes have garnered interest from hotel guests. The hotel is currently looking into reprinting it and making it available for purchase in the gift shop.

The NOPSI Hotel has 217 guest rooms, including 76 suites. Guest rooms range in size from 350 to 800 square feet, and are tastefully furnished and decorated with artwork inspired by NOPSI’s transit heritage.

Guest bathrooms are tiled, and the showers are hailed as being the largest in the city. In addition to showers, suite bathrooms include large footed bathtubs.

Suites on the ninth floor feature large outdoor terraces that guests can use for in-room spa treatments.

The hotel and its outdoor patio are pet-friendly, with designated rooms on lower floors to allow guests and their four-legged friends to take the stairs. Rooms are specifically cleaned with chemicals that are safe for pets and children.

The property features 14,000 square feet of “historically significant” indoor and outdoor meeting space, including the Dryades Ballroom — an industrially elegant space with arched windows, exposed brick, and 30-foot ceilings. Large, bright chandeliers provide a glamorous contrast to the 24-foot high crane and track that once transported machinery for repair in the building.

As for the hotels location in the CBD, “We feel we have the best of both worlds,” says Ellen LeMaire, the hotel’s general manager. “You can easily walk a few blocks and be in the French Quarter and have that experience, but you can also have a business meeting, be very productive and focused.”

NOPSI’s lobby also features the underCURRENT Bar and Patio for afternoon cocktails and light snacks, and Above the Grid — a rooftop spot for hotel guests and visitors to enjoy cocktails and a pool with a view of the city’s skyline. Patrons are welcome after 4 p.m.

SERVICE IS LITERALLY ITS MIDDLE NAME:

The NOPSI Hotel prides itself on providing a high level of service, and boasts a large, experienced staff.

The ratio of employees to guest rooms is almost one-to-one,” says LeMaire. “That’s unheard of in the hotel market nowadays. We just found it was important to provide that service level.”

That luxury service level includes a valet, doormen, bellmen and a concierge. The hotel currently employs 165 people — 155 full-time and 10 part-time — and is still hiring.

“You have someone purely dedicated to take time with you, and listen to you explain what you’d like to see or experience in the city and steer you in the right direction,” says LeMaire.

“At NOPSI Hotel, service is more than just a word; it’s part of the building’s fabric and complements Salamander’s authentic approach to hospitality,” says Sheila Johnson, founder and CEO of Salamander Hotels & Resorts.

“We took a lot of time hiring the right staff, and hiring people who were certainly passionate about hospitality,” says LeMaire. “It takes a little more attention to detail to be a luxury product.” 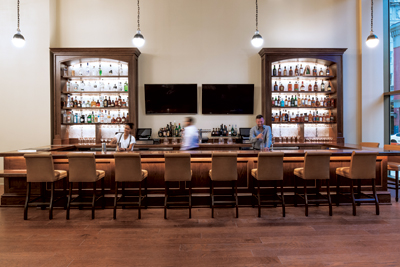 NEW DINING AND DRINK OPTIONS FOR THE CBD:

Adding to the growing list of drinking and dining options in the Central Business District, the NOPSI Hotel features three different food and beverage venues, each providing a different experience.

“We are a community restaurant; we built this place for the locals, for the community,” says Chef Dustin Brien. “Public service was such a big part of what everyday life was in New Orleans, and we’re paying tribute to that.”

The restaurant can seat up to 112 guests at a variety of tables and booths. They’re open for breakfast, lunch and dinner. Chef Brien says he aims to serve modern comfort food, with seasonal and fresh ingredients, and at a lower price point than other restaurants in the area to help drive local business.

Brien admits that approach does come with its challenges. “In an economy based on tourism, people want to come down here and they want to get crawfish in the middle of January. We can get them, but they’ll be frozen from Asia, and we don’t want that.”

Brien is so focused on local, fresh ingredients that he plans to eventually make his own cheese and charcuterie.

And while Brien places an emphasis on seasonal ingredients, and seasonal dishes, he’s planned a menu that guests will always be able to count on. “The cooks have this core menu that never changes, so that when we do introduce the seasonal items that core menu is so strong that those items are consistent,” he says. 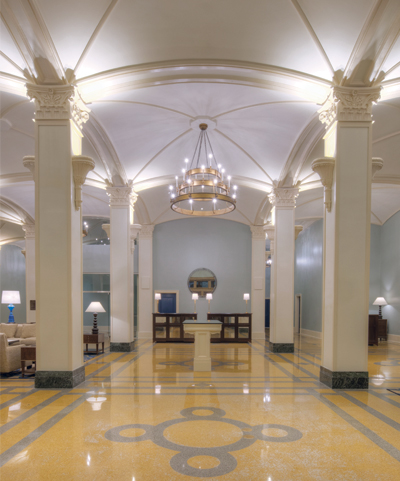 A STEP BACK IN TIME:

Constructed in 1927 and designed by Favrot and Livaudais, a Louisiana-based firm, NOPSI lies within the boundaries of the Lower CBD Historic District.

“It was a beautiful building,” says LeMaire. “It was very inviting, and people liked to come to it.”

For many locals, a trip to pay the utility bill was part of a special day downtown. The grand lobby of the building featured vaulted ceilings, ornamental columns, arches and stone terrazzo flooring.

Things were very different from the way most of us conduct business today.

“There was a connection. People came in here, there was a transaction being made, but they came here to see someone, and they usually knew who they were talking to.” LeMaire adds, “It’s so foreign to us now; we don’t go anywhere to pay a bill, we do it online.”

In addition to the NOPSI building, BLT also acquired the former Dryades Building, and another structure next door that once housed a savings and loan company.

BLT enlisted Woodward Design + Build, a New Orleans architecture and construction firm that worked with Louisiana’s State Historic Preservation Office to maintain the historic integrity of the buildin, during the renovation process.

When construction began, workers found water in the basement from Hurricane Katrina.

“Unfortunately in the CBD there were a number of buildings that were vacant — Katrina didn’t help,” says LeMaire. “With the resurgence after the storm, people started to come in and look at the buildings, look at what was here. I don’t know that the building would have come into its own if the owners hadn’t thought it was important to have a luxury product and sustain the history of the building.”

Architectural details of the building had to adhere to the original design for the building to maintain its historic property status. The renovation was performed under the guidelines and approval of the Louisiana State Historic Preservation Office, the Federal Park Service, and the New Orleans Central Business District Historic District Landmarks Commission, which oversees the Lower Central Business District Historic District.

“The sconces have all been cast just as they were. We were able to save some of the cornices, and what they couldn’t they re-fabricated,” says LeMaire. “The terrazzo floors are original, and you’ll see there’s some imperfections just as you would have with any older floors.”

Even the wrought-iron fence on the outdoor patio had to match the style of the original construction.

“The fence we originally chose had fleur de lis finials, and we had to change those,” said LeMaire. “We had a choice of two types of spears to ensure the historical accuracy.”

At the center of the sweeping lobby is an exact replica of the transaction table; the original was too damaged to save. The table looks like a fancy version of what you would see at a bank, or the post office — with slots for various forms that you might need to fill out in order to complete your transaction. The original table had a thick marble top; this one is covered with a pane of glass allowing patrons to view NOPSI memorabilia that’s displayed in the cubbies: an electric bill, an employee ID badge, streetcar tokens — all pay homage to the building’s history.

“There have been guests that have come in, locals that say, ‘This is what you had to do for a bus transfer,’” says LeMaire. “They educate us.”

The hotel solicited memorabilia donations through its website, and plans to hang a plaque with the names of people who donated items. Like the building, time and nature took a toll on those, too.

“People had all kinds of things,” says LeMaire. “We would have even more but so many people lost stuff in Katrina, and they all said, ‘Oh, I had a whole box of stuff that was ruined,’ or they threw it away.”

Walking down the alleyway, old advertisements and documents hang on the wall above the original transaction counter. “It kind of looks like a bank teller counter,” says LeMaire. “We were actually going to put it on the inside of the meeting room, but they [historical team] said, ‘No, you have to keep it out as it was before,’ which, it turned out, is the better thing to do, because more people get to see it and experience it being on the outside.”

Ellen LeMaire says that everyone at NOPSI — from the hotel staff and management to the executives at Salamander Hotels — respects the physical and historical place they hold in the neighborhood.

And about those locals who stop in for a visit, “You know, they come to pay a bartender now, so it’s probably a little better transaction,” she laughs.