S. Broad Street At Gravier Street To Be Restricted Though Mid-December

NEW ORLEANS — The City of New Orleans issued a traffic advisory for the intersection of S. Broad Street and Gravier Street beginning today, Thursday, Nov. 10, at 7:00 p.m. and lasting through mid-December. The traffic restrictions will occur in three phases and will facilitate placement of American with Disabilities Act (ADA) compliant traffic signals at the intersection.

Beginning today until Tuesday, Nov. 15, at 5:00 a.m., the S. Broad Street lake-bound lane at Gravier Street will be closed to vehicular traffic to facilitate installation of underground drainage utilities. Construction crews will be onsite working throughout this road closure. 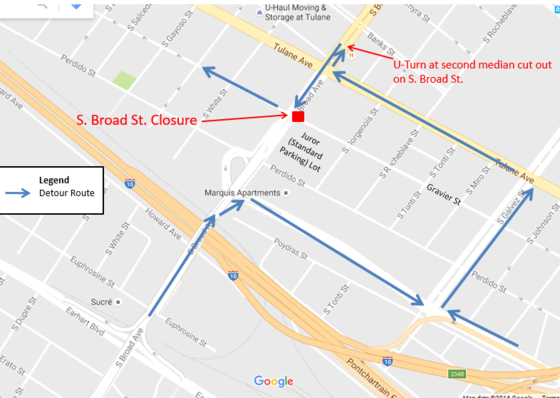 From Tuesday, Nov. 15, until Monday, Nov. 28, vehicular traffic on both sides of S. Broad Street at Gravier Street will be impacted. The inside lanes, on either side of S. Broad Street, closest to the neutral ground, will be closed. Two travel lanes in both directions will be maintained on S. Broad Street through the work zone. 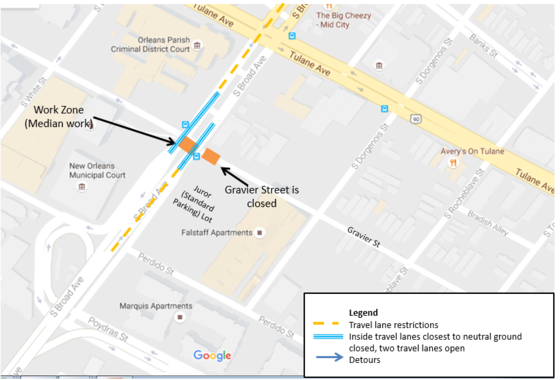 Lake bound Gravier Street traffic will be diverted to the Poydras Street off-ramp to Perdido Street and then S. White Street. Commuters should follow the posted detour signs.

S. Broad Street will not be accessible from the Poydras Street on-ramp. Commuters should plan to take S. Galvez Street to Tulane Avenue in order to reach S. Broad Street lake-bound. 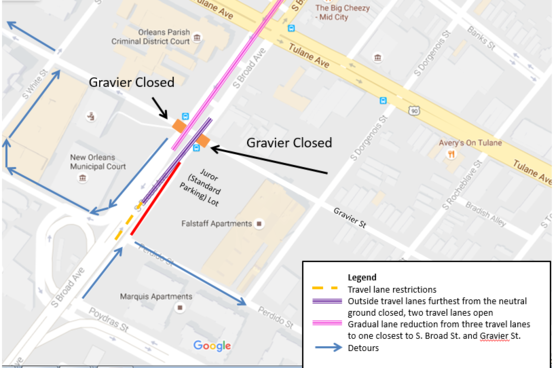 At this time, the Gravier Street reconstruction project (S. Galvez Street to S. Broad Street) is approximately 55 percent complete and on schedule to be completed in early 2017. The full scope of work includes removing and replacing underground water, sewer and drainage lines, repaving the roadway, installing new sidewalks and ADA-compliant curb ramps at intersections.

Residents and commuters are reminded to use caution when driving, bicycling and walking near active construction sites.