Henry Shane, chairman of Favrot & Shane Companies, surrounds himself with bits of whimsy as he sits at the wheel of an apartment empire.

As chairman of Favrot & Shane Companies, Henry Shane has steered his businesses in the last 46 years toward ownership of 9,500 apartments and an array of shopping centers, self-storage facilities and office buildings.

Step inside his office, in a contemporary building hugging a huge plant-and-tree-filled atrium in Metairie, and you will immediately be in touch with this unique businessman, active civic leader and collector.

His personal collections range from art and sculpture to old radios and toys — he owns 160 vintage cars and over 10,000 collectibles housed in a museum-like space. “I smile when people question me about my collections and simply explain that the child within me is very much alive and well,” he says.

Rest assured that Shane and his office are not boring.

“How do you like this tightrope walker?” he asks, pointing to a wire strung above his desk topped with a tiny figure perched on a wheel that he rides from one side of the room to the other. “It reminds me of my earlier career when I was adventuresome, that it sometimes felt like I was a tightrope walker,” he says, and then he points to the other side of the room: “And this is a model of the fins of a 1959 Cadillac, one of my favorite cars.” He quickly adds that he just bought the original Mercedes Benz owned by Chris Owens, the legendary Bourbon Street entertainer.

Shane’s playfulness and talent for embracing life keep him active and young at 78. But there is nothing grand about his relatively small office, which opens onto a 10-by-18-foot greenhouse.

“This is all the space I need,” he says as he sits in a George Rodrigue chair, a gift from the now deceased famous artist. “I have 120 of George’s paintings and enjoy sitting in the unique chair.” With paneled walls and a pair of mirrors, the space also includes Hunt Slonem paintings, a wall of old radios, the first cellphone he ever used and a somewhat scruffy leather chair across from his desk. “Somebody asked why I didn’t re-cover the chair,” he says. “I said, ‘What for? It looks great to me.’”

Shane then leans over to show off his cuff links. “These are from my $20 cuff link collection — so called because most of them cost less than $20. When somebody recently suggested they would like to give me a pair of nice cuff links as a gift, I said, ‘OK, just be sure they don’t cost more than $20.’”

Seriousness and fun seem to go hand-in-hand with everything Shane does. Outside his office door, visitors can view a wall of honors and awards he and the company have received. Some of the accolades include the Outstanding Public Service Award from the Alliance for Good Government, the Award for Outstanding Dedication and Service to the Citizens of Jefferson Parish by the Jefferson Alliance for Good Government, and the Community Leader of the Year from the Jefferson Chamber of Commerce. Shane also served as president of the National Apartment Association and was inducted into its Hall of Fame in 1989. There are mentions of his Junior Achievement Business Hall of Fame designation, The Young Leadership Council’s Role Model honor and Our Lady of Holy Cross College’s Brother Andre Award. He is also proud of the work he has done with the Jefferson Economic Development Committee and East Jefferson General Hospital. 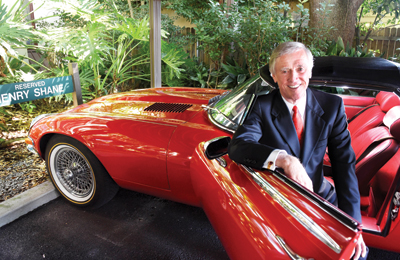 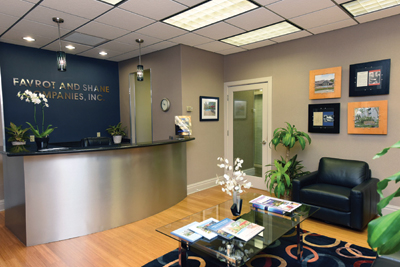 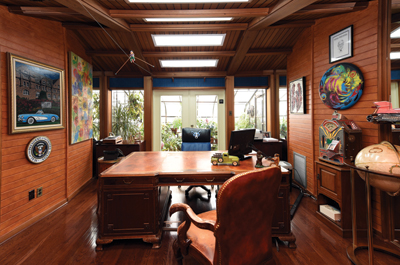 LEFT: Henry Shane with his classic 1964 Jaguar XKE convertible — part of his collection of 160 vintage cars. RIGHT: The reception area features framed magazine clippings and photographs of past projects. BOTTOM: Shane’s office adjoins a greenhouse — adding a special outdoor dimension for his enjoyment.

Next to Shane’s office is a sleek boardroom, featuring a granite conference table and comfortable black chairs. The space embraces outdoor views with a bank of windows showing off lush greenery. Of course, Shane adds some whimsy to the room: “This is my jazz band,” he says, as he activates a remote-control collection of tiny jazz players on the table.

Shane says the most exciting project for him is the current one, speaking about Bella Ridge, a 500-unit gated community in Jefferson Parish set to add 264 units by the end of 2015. Bella Ridge features private parking on the same level of each residence in the luxury apartment building, thanks to a three-story wrap around parking structure, along with some creative amenities. “It will even have a ‘Bark Park’ for our furry friends and bike rentals,” he says.

“It has been a good 46 years for the company,” he says, noting that the company started with Tim Favrot as an architectural firm. A graduate of Tulane University with a master’s degree in architecture, he enjoys telling the story of how he got into in the apartment business.

“My father was a carpenter, and I was looking for a way of providing some income for his senior years,” he says. “I came up with the idea of building him a house to rent. When I saw how quickly the house rented, I thought, ‘I am onto something,’ and immediately began building rental duplexes.”

Shane says the company has managed to amass 9,500 rental units because once they began building apartments, they never sold anything. “At the end of our first 10 years, we had 2,000 rental units and we have been building ever since,” he says. Shane doesn’t skip a beat as he shares the secret of the company’s success. “We are constantly upgrading everything. We like to say there is no such thing as an old apartment in the Favrot & Shane portfolio. You would be surprised to see how handsome some of our oldest properties look today. I believe you can never stop improving what you have.”

Shane says that the market for rental residential property is stronger than ever. “According to the United States Census Bureau, home ownership in the country continues to fall,” he says. “Last year registered close to a 50-year low, with 64 percent of Americans owning a home, compared to 69 percent 10 years ago. The challenging economics of home ownership and changes in market preferences are both contributing to rising apartment occupancy. We see a constant demand for rental property.”

He says he doesn’t expect the market to slow down anytime soon. “Because the fastest growing segments of the population in the next decade will be young professionals and empty nesters, the trend toward apartment living is expected to continue. While homeownership used to be the ultimate American dream, today many people prefer to have the more carefree living style of renting.” 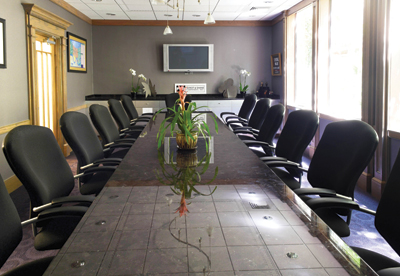 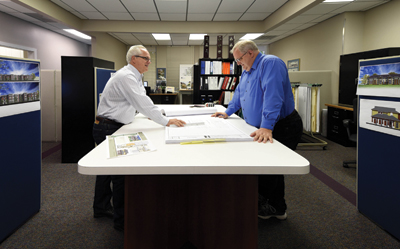 Today, the multifamily units in the Favrot & Shane collection are managed by 1st Lake Properties, which lists its largest concentration of properties in Jefferson Parish, with additional operations in Baton Rouge, Mandeville, Covington and Slidell, as well as in Ridgeland and Picayune, Mississippi. “We have 375 employees working for 1st Lake Properties and a large number of subcontractors who do regular work for us,” he says.

Shane points with pride to the training programs within the company and the many community service programs employees have embraced over the years “In the spirit of giving back to the community, our employees have been involved with a number of charitable events throughout the years including Second Harvest Food Bank, blood drives for the Blood Center, clothing drives for charities including the New Orleans Mission for the homeless, and the Coats for Kids Foundation.” Then he smiles and adds, “We do not forget about our furry friends, with several of our properties having special pet food drives for ARNO (Animal Rescue New Orleans).”

Shane is quick to give credit to his management team, which includes James P. Favrot, president and the son of the late company co-founder H.M. “Tim” Favrot; and his two daughters, Stacey Shane Schott, a senior vice-president, and Michele Shane L’Hoste, president of 1st Lake Properties. “We have a strong company that is a good employer and offers excellent benefits,” Shane says. “We also offer an outstanding in-house training in aspects of our operations.

Meantime, Shane is proud of his community involvement as well. He donated three major sculptures — “Blue Dog” by George Rodrigue, “Mother Cluster” by James Michalopoulos and “Toucans” by Hunt Slonem — to the beautification of Veterans Memorial Boulevard, and he is planning to obtain 20 sculptures for the city of Kenner. He recently donated a vintage car for a raffle to raise funds for the Ogden Museum of Southern Art, one of his favorite nonprofits, and he has opened his museum and home, a replica of famous Nottoway Plantation in White Castle, Louisiana, for nonprofit functions.

“It’s all about giving back to the community,” Henry says. “I am ever grateful to the community that has made us, and as I sit in my office surrounded by things I love, I am ever mindful of the countless thousands of people who have helped to make it all possible. I never forget my humble beginnings as the son of a carpenter, a good man who worked hard and loved his family. He always hoped I would amount to something, and I believe I lived up to his expectations.”