On July 26, 1896, an old storefront on Canal Street was transformed into the first for-profit movie theater in the country — Vitascope Hall.

One hundred and twenty years later, a 90-year-old building, vacant for a decade, received new life on March 4 with the opening of Mid-City’s first neighborhood movie theater since Movie Pitchers went dark in 2000.

BIZ: First, can you share a little bit about your background?

Brian Knighten: I have a master’s in education from UNO and taught middle and high school for a few years. Following that, I worked at Tulane’s Stone Center for Latin American Studies, where I ran a small film library. That’s where my interest in film really began.

BIZ: Why a movie theatre?

BK: I don’t have any formal training in film, nor do I have that much knowledge of film, I just love the idea of film and what it can do for people. Watching a movie with a good story line and actors allows viewers to transcend their own reality for two hours and immerse themselves in another world. Aside from reading, there isn’t another medium that allows that to happen. Plus, I have always felt it would be a good business opportunity.

BIZ: When did the idea for the theater come about?

BK: It came in 1999 when I was sitting in a Mid-City restaurant and overheard a couple talking about a theater, Movie Pitchers, closing and I thought to myself what a tragedy it would be if that happened. The next day I went to the owner and came up a plan to keep the place open. The plan didn’t work, obviously, but the idea stuck.

BK: If Mid-City is the heart of New Orleans, then Broad is its main artery. Broad is a tremendous commercial corridor that is finally being rediscovered by developers. It all really started with Broad Community Connections and their ReFresh (Whole Foods) project. That was the anchor and a vote of confidence for Broad and it showed my lenders that if Whole Foods believed in the street, so should they. Plus, the building is gorgeous. 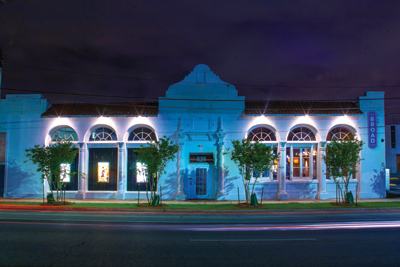 Built in 1923, the Spanish-style building that serves as home to The Broad Theater lay vacant for 10 years.

BIZ: The building is a brick and stucco Spanish-style structure built in 1923, which is unique for the area. What appealed to you about it?

BK: For one, there aren’t many examples of Spanish Colonial architecture in New Orleans. I could have found a warehouse somewhere in the city many years ago, but I waited until I found a location and building that would allow us to be viewed as a real theater by our customers. The building is beautiful and is widely recognized by people who travel Broad — everyone knows the old boxing gym across from Auto Zone!

BIZ: Were there construction challenges?

BK: There weren’t many challenges, other than the slow pace at which funds and crew were available for construction. My crew did most of the work, so they had to shuffle between the houses we were building and the theater. In the beginning, the priority was selling houses to fund the theater; the closer we got to finishing, I pushed all the resources to the theater.

BIZ: What were your goals when creating the theater? What features did you specifically want and why?

BK: The main thing I wanted to create was a place people felt comfortable in. As a general rule, that guides everything we do.

BIZ: What did you absolutely not want for/in your theater?

BK: We didn’t want table service in the auditoriums. While some people love it, some people hate it. Canal Place Theaters does an excellent job at providing this service. We wanted to give people another option when going to the movies. These dine-in theaters tend to be more expensive than your traditional theater, and we didn’t want to be known as an expensive place to enjoy a night out. We want to have our customers come to the theater once a month, not every three months, and we feel that by having good prices and a comfortable atmosphere, they will come more often.

BK: The bulk of my financing came from South Central Planning in Houma — a development corporation that works in New Orleans through US EDA and some state loans to fund projects that may be not otherwise be funded by traditional banks. I worked with the Louisiana SBDC to secure the loan, and I cannot recommend them enough (both of these organizations, actually). The rest of the funding came from my own injection.

BIZ: The theater was two years in the making. Why so long?

BK: The project changed mid-way through to include two more screens (from two to four). This nearly doubled the cost, which unfortunately doubled the time. Always know what you want to build before you start building it!

BIZ: What was the biggest challenge in seeing it come to life?

BK: Surprisingly, getting the building permit. Because of the Lafitte Greenway overlay, the city required a variety of permitting that would not have been required in another location. These overlays generally have the best intentions, but sometimes they can hamper a good project, which I believed this to be. Although the process was a bit onerous, the City Planning Commission staff was super helpful in getting me to where we needed to be. At the end of the day, we were able to open and the city is able to collect some taxes on a once-abandoned building.

'We want to be that neighborhood theater that creates fond memories and encourages customers to come back and spread the word.”

BIZ: How do you view the theater scene in New Orleans? Past vs. now?

BK: Getting better every day. Prior to Katrina, I’m not sure an independent theater like ours would have survived. With the influx of out-of-towners, we are getting people who come from cities with these sorts of theaters. They want to frequent local, independent venues, and prior to us opening, didn’t have that opportunity.

I think the future looks great for film in the city. Each week since we have opened we have hosted a private screening of either a locally shot film by a local filmmaker or an out-of-town director who shot the film in New Orleans. The film community is growing and finally getting the recognition it deserves.

BIZ: How is The Broad different from Zeitgeist or Prytania?

BK: I think we all serve different markets and customers. I would throw Canal Place into that mix as well. All of our theaters offer something different. Prytania is a much-loved theater Uptown that offers some of the same films as we do, but without restaurant food and cocktails. Zeitgeist offers an incredible variety of films and other events, but functions more as a microcinema. Canal Place offers a good mix of programming but does so in a more upscale environment. It will take time, being the new kid on the block, but we will carve out our audience and develop our own following the same way these other theaters have.

BK: Yes, about one or two times a week we’re hosting comedy shows, both sketch and improv. They’ve been really well received. In the future I’d love to start doing some talks and panel discussions, both about film and not.

BIZ: Both your ticket and concession prices are really competitive, even low for a typical theater. What was the thought behind that?

BK: We have this beautiful lobby and bar so we want to encourage people to come in for a drink, whether they’re seeing a movie or not. Our bartender makes some really incredible cocktails and we have different pop-up restaurants all the time. Our thinking was always, ‘how do we get people to order that second drink?’ I think we do that by keeping our prices low so they can afford to do it.

For the ticket prices, we looked at prices regionally, not just in New Orleans. We’re at $10 for a general admission seat and I think that’s good. You get up to $12 or $13 and, maybe it’s just a mental thing, but I think it runs the risk of being too expensive. We want a single person to be able to come in and have a great evening for under $20.

BIZ: How are you marketing the theater?

BK: Social media, of course. Advertising for movie theaters isn’t the same as it was even 10 years ago. Most people don’t go in the paper and check movie times, they search for the movie on their phone, so we have to make sure we pop up. We’re also working on some creative marketing ideas and partnerships right now that aren’t quite ready yet. 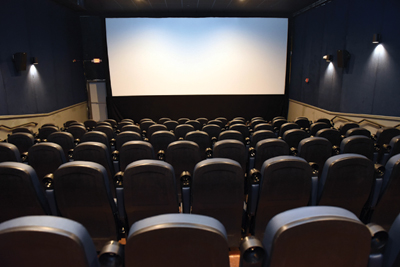 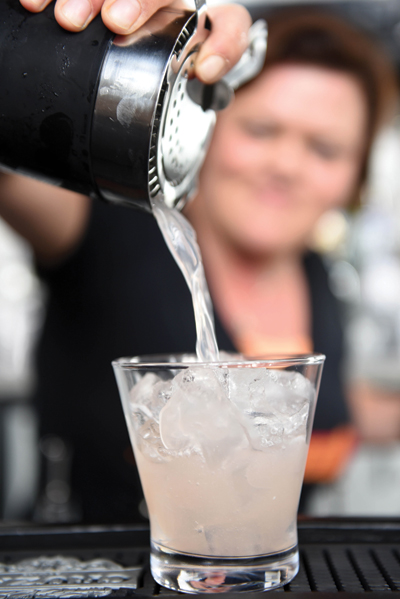 LEFT: The Broad’s four theaters range from 65 to 125 seats. RIGHT: The theater is quickly becoming known for its cocktails.

BIZ: Are there plans for a marquee?

BK: Yes. In the next one to two months we’ll have something up. We have a design for it.

BIZ: How has the theater been received so far?

BK: Everything we’ve been hearing is great. We actually haven’t received anything negative online, which is great. Mid-City loves us, they’re happy we’re here, but we’re still trying to reach the Lakeview, Gentilly, Uptown market. It’s hard because New Orleans is so neighborhood driven, but we’re fighting the good fight to get the word out.

BIZ: How hands-on are you? How much time do you spend at the theater?

BK: Typically I spend the morning on construction sites and I’m in the theater in the afternoon. I’m fortunate that we have a really great staff. I also do a lot of the film selection.

Outside of the films we’ve also been really busy with events. We’ve had a special event here almost every single week since we opened — a range of things like all-day conferences, individual talks and a lot of local cast and crew screenings. We also just worked with a middle school nearby to host an event for them. We were able to make it affordable enough for them that it would work. We want to be known in the neighborhood as affordable and approachable.

BIZ: What are your biggest operational costs? Your biggest sources of revenue?

BK: We don’t own the building, we’re on a long-term lease, but definitely that loan payment. Then labor costs are the second biggest chunk.

As far as revenue, it’s definitely concessions. The medium popcorn and medium drink — those are the No. 1 sellers and the No. 1 profit makers. Our cocktails are also selling really well.

BIZ: You hear that movies make their money on concessions, not ticket sales. Is that true?

BK: A lot of people think that but we do actually make money on ticket sales. About 35 to 60 percent of ticket sales go to the distributor.

BIZ: What are your goals for the theater — short-term and long-term?

BK: I’d say financially, for year one it’s definitely just to break even. Of course the goal is for the theater to be self-sustaining — right now I’m still pumping a lot of money into it.

I really want to get a steady restaurateur in there too, someone who will take over and make it their own, working with us, of course.

There’s so much potential here. I feel it. I feel it’s coming; we’re just not there yet.