And His Collection of Linen Clothes

Robert Legg prides himself with being a man of style.

“In the summer, I feel well dressed wearing a nice linen shirt, white linen slacks and white shoes,” he says. “I have always enjoyed the clean crisp look and linen is perfect for our weather. Linen is cool and very fashionable in New Orleans.” Then he goes on to explain that to be a bit daring he enjoys wearing his white linen sport coat with jeans for a different look. “Of course, the jeans must be ironed to really look smart,” he says.

New Orleans and linen – it’s a match made in heaven. Never mind that you normally only get one wearing before your best linen sport coat, shirt or pants must visit the cleaners, you can’t have lunch at a place such as Galatoire’s without seeing both men and women wearing it.

“With all the restaurants keeping their air conditioning doing double duty to keep the temperature below 70 degrees, you don’t have to worry about your linen collapsing in a sweaty mess against your body,” Robert says with a smile.

Having just celebrated his 87th birthday, and with his long career as a hairstylist from New York to Washington, DC, to New Orleans, he still works three days a week.

“I love my profession and my wonderful clients, and I have no plans to retire,” he proudly says. “And he has enough stories to tell to make the movie “Shampoo” with Warren Beatty and Julie Christie seem tame. “It was exciting to work in the New York City Saks Fifth Avenue. With about 40 employees, believe me it was an interesting place filled with over-the-top personalities. Most of the male hairstylists were prima donnas and the females were known to sometimes have dramatic cat fights.” 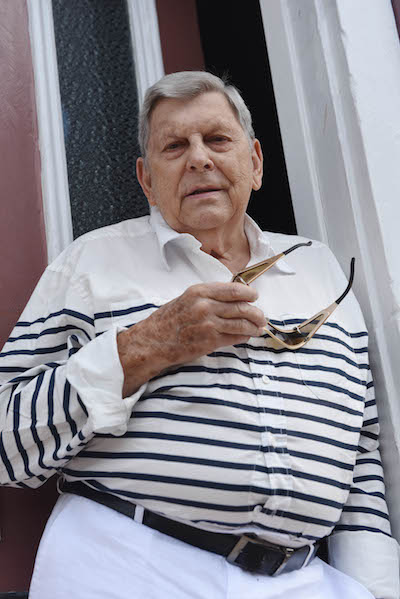 Robert moved on the Washington, DC, where half the employees and all the male hairstylists were required to wear a full suit or slacks and a coat with a dress shirt and a tie.

“Since I was one of the managers, I was permitted to wear an ascot or a tie,” he says. “I liked ‘dressing-up’ and working with such a high class clientele of politicians and ambassadors’ wives.” He especially remembers having the ambassador from Nepal as a client. “She was very pretty and always wore beautiful saris,” he says.

And then there was an important General’s wife who had traveled throughout Asia collecting interesting fabrics. “She became a good friend and gave me enough linen to have my first linen sport coat tailored – thus beginning my life-long love affair with linen,” he says, “although I remember a wonderful linen shirt I bought in 1950 to wear on a vacation to Cade Cod.”

Robert says that when he moved to New Orleans in 1965 and discovered the tropical climate, his interest in linen and other natural fabrics only increased. Today he lives in a colorful shotgun house on Royal Street in the Marigny and calls his style “upscale casual.”

“I always try to look special for work, where I love to add a pair of red suspenders to my outfit at least once a week,” he says. “I have noticed that my clients like to feel that I have made an effort to look nice to style their hair, and, of course, my days of wearing a suit or a sport coat and slacks with a dress shirt and tie or ascot ended when I arrived in New Orleans.” Then he smiles and adds, “I like to dress to stand out in the crowd no matter where I happen to be, and you will find my tastes are highbrow to lowbrow. I enjoy jazz or classical music, musical comedy or opera, and my linen wardrobe is always in style.” 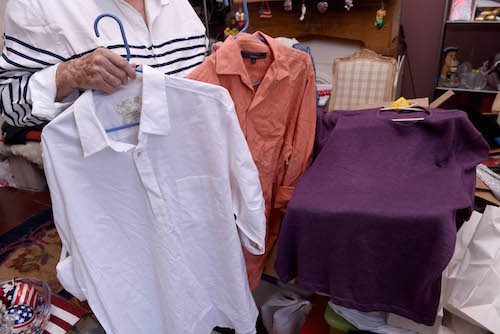