KENNER, LA – Rivertown Theaters for the Performing Arts announced a diverse lineup of productions for the 2017-2018 season at its annual party and fundraiser Saturday, Jan. 7, including “Guys & Dolls,” a male and female version of “The Odd Couple,” “Million Dollar Quartet,” “Steel Magnolias,” “Little Shop of Horrors” and “Beauty & The Beast.”
“What can I say except it’s going to be a very extraordinary and fun theatrical year at Rivertown Theaters,” co-artistic/ managing director Kelly Fouchi said. “For our 6th season, we are widening our range of shows to feature titles and music everyone knows and loves. There is so much talent in the      New Orleans area, so we are very proud to introduce some new directors to Rivertown Theaters. We have great respect for them and their work and know they will bring the same level of excellence we      are committed to.”
David Hoover will be directing “Guys & Dolls,” Michael McKelvey will be directing “Million Dollar Quartet,” Rivertown Theaters for the Performing Arts co-artistic director Gary Rucker will be directing “Little Shop of Horrors,” and Ricky Graham will be directing “The Odd Couple,” “Steel Magnolias” and “Beauty & The Beast.”
“We are also thrilled with the support and response that we have received for each season’s offerings from our very loyal and ever-growing patrons,” Fouchi said. “Each of the shows last year played to rave reviews, sold out houses and enthusiastic audiences. Our goal is to continue to present productions that are full of high entertainment value featuring some of the area's most talented performers.”
The fundraising evening at the Rivertown Theaters for the Performing Arts, 325 Minor St., began with a cocktail reception at 7:00 p.m., followed by an opening number with the 610 Stompers led by Fouchi and the “Show and Season Announcement” with Fouchi and Rucker.
Both Rivertown Theaters for the Performing Arts co-artistic directors presented a laugh-filled video retrospective of the past season and their always entertaining announcements of the individual shows for the 2017-2018 season.
Guests were treated to performances from each upcoming production and were able to purchase raffle tickets during the evening for a chance to win Mardi Gras Krewe of Muses shoes presented with each announcement, designed specifically to reflect the theme for each of the 2017-2018 shows.
During the evening, Fouchi and Rucker also presented “People of the Year” recognition awards to NOLA.com/ The Times-Picayune theater critic/ writer Theodore P. Mahne and videographer Bill Blanke for their longtime, ongoing support and contribution to Rivertown Theaters.
The evening closed out with a dessert and champagne reception sponsored by area businesses including Langenstein’s, Treasure Chest Casino, Haydel’s Bakery and The Crossing to name a few.

Frank Loesser's celebrated musical comedy about rolling the dice and falling in love under the bright lights of Broadway. “Guys and Dolls” is considered by many to be the perfect musical comedy. This multi Tony & Olivier Award winning classic is packed with one unforgettable song after another—not to mention loads of romance and charm to spare. With beloved tunes such as “A Bushel and a Peck,” “Sit Down, You’re Rockin’ the Boat,” “Luck Be a Lady,” and “The Oldest Established,” there is plenty of toe-tapping to be had. If you are the betting type, you should know that “Guys and Dolls” is the odds-on favorite to ride to the winners’ circle of your greatest Broadway loves. These gents and dames have an irresistible mix of naughty, nice and classic Broadway pizzazz that will entertain audiences of all ages.

Neil Simon’s classic comedy about two mismatched roommates, has enjoyed countless revivals, three TV series and a hit film testifying to the sure-fire hilarity of “The Odd Couple.” Filled with one-liners, slapstick comedy and likeable characters, we’re delivering a one-two punch by presenting the male AND female versions with two different scripts, both written by Neil Simon. Watch the same casts flip roles and switch places as they perform the two different versions throughout the run, proving that gender has nothing to do with being a bad roommate, or a great friend.
Audiences can pick and choose their preferred version and are encouraged to come back a second time to experience both shows. There will be a special “combo package” ticket price for the two-timers! Director Ricky Graham will bring his comedic expertise to the poker game (male) and Trivial Pursuit night (female), assuring a night full of laughter for all.

“Million Dollar Quartet” is the new smash-hit musical inspired by the famed recording session that brought together rock 'n' roll icons Elvis Presley, Johnny Cash, Jerry Lee Lewis and Carl Perkins for the first and only time. On Dec. 4, 1956, these four young musicians gathered at Sun Records in Memphis for what would be one of the greatest jam sessions ever.
This thrilling musical brings you inside the recording studio with four major talents who came together as a red-hot rock 'n' roll band for one unforgettable night. “Million Dollar Quartet” brings that legendary night to life, featuring a score of rock hits including "Blue Suede Shoes," "Fever," "That's All Right," "Sixteen Tons," "Great Balls of Fire," "Walk the Line," "Whole Lotta Shakin' Goin' On," "Who Do You Love?," "Matchbox," "Folsom Prison Blues," "Hound Dog" and more. Don't miss your chance to sing and dance along with some of the greatest of all time!

It’s somewhat of a “Louisiana rite of passage” to experience “Steel Magnolias” live on stage. If you’ve already had the pleasure, continue the tradition, grab your loved ones and closest friends to share this beloved “comedy that will make you cry!” Six women come together in this hilarious and heartwarming story of life, love and loss in a small North Louisiana parish. At the center of the group is Shelby, newly married and joyfully pregnant, despite the fact that her diabetes could make childbirth life-threatening. Terrified and angry at the possibility of losing her only daughter, M'Lynn looks to her four closest friends for strength and laughter as she battles her deepest fear of death in order to join Shelby in celebrating the miracle of new life. Not just for the ladies, this wonderfully crafted play is a beautiful tribute to friendship, community and the power of the human spirit that will touch the hearts of all theatergoers. Spend an evening celebrating the Louisiana woman…“delicate as a magnolia, but tough as steel.”

Feed the need for musical hilarity with this delicious sci-fi smash about a man-eating plant. A deviously delicious Broadway and Hollywood musical hit, “Little Shop of Horrors” has devoured the hearts of theatre goers for over 30 years. Howard Ashman and Alan Menken (Disney's “The Little Mermaid,” “Beauty & The Beast” and “Aladdin”) are the creative geniuses behind what has become one of the most popular shows in the world. This charmingly tongue in cheek comedy features the meek floral assistant Seymour Krelborn who stumbles across a new breed of plant he names "Audrey II" after his co-worker crush. This foul-mouthed, R&B-singing carnivore promises unending fame and fortune to the down and out Krelborn as long as he keeps feeding it, BLOOD. Over time, though, Seymour discovers Audrey II's out of this world origins and intent towards global domination! Throw in a trio of sassy, high belting street-urchins, a nitrous oxide loving dentist and a cast of “Skid Row” characters, and you’ve got an evening of “over the top” musical fun for everyone.

"Be Our Guest!" The Academy Award-winning film comes to life in this romantic and beloved take on the     classic fairytale. Step into the enchanted world of Broadway's modern classic, Disney's “Beauty and the Beast,” an international sensation that has played to over 35 million people worldwide in 13 countries. The stage version includes all of the wonderful songs written by Alan Menken and the late Howard Ashman, along with new songs by Menken and Tim Rice. The original Broadway production ran for more than 13 years and was nominated for nine Tony Awards, including Best Musical. This "tale as old as time" is filled with spectacular costume, sets and your favorite characters like Belle, Gaston, Lumiere, Cogsworth, Ms. Potts, Chip and more. 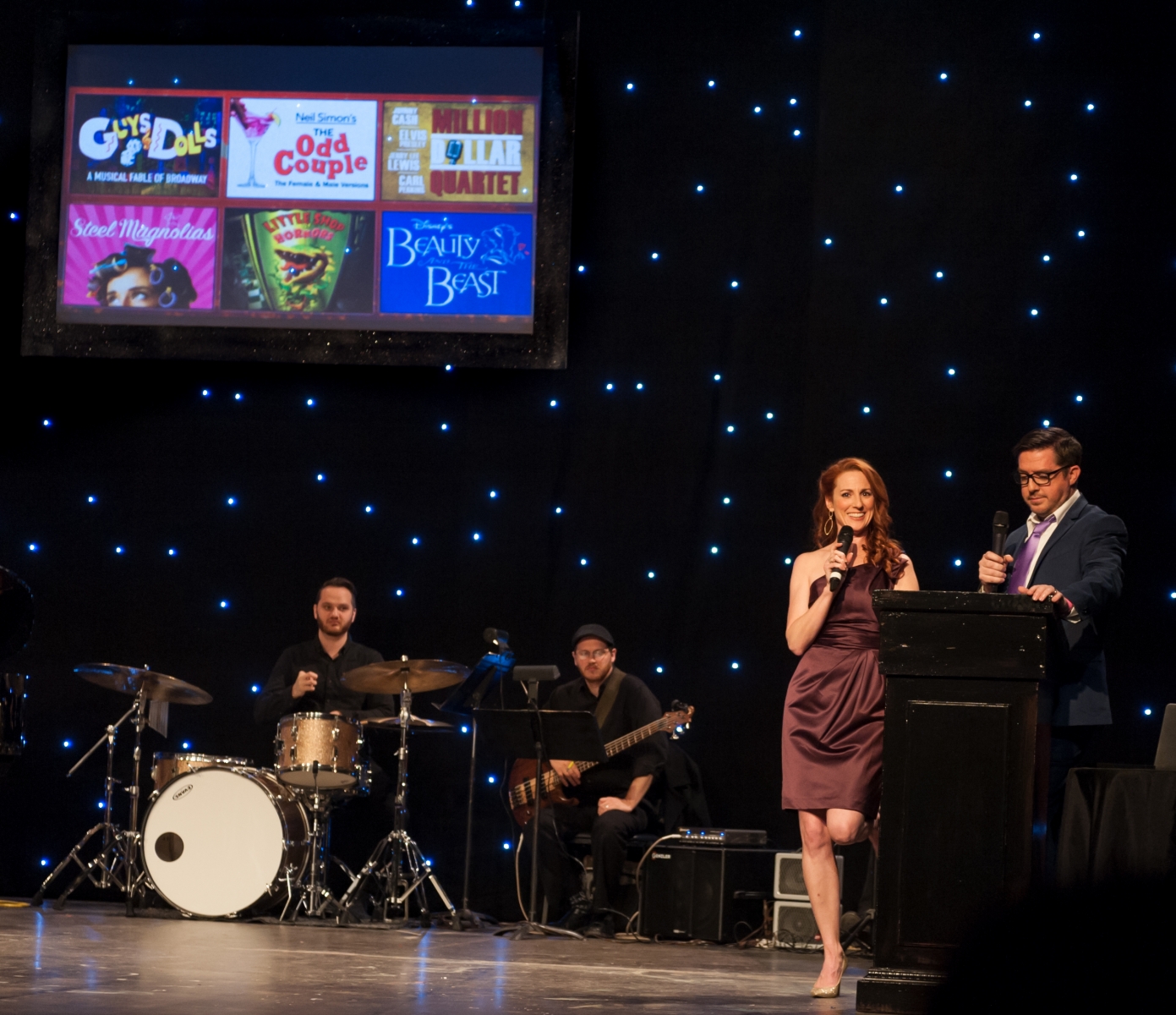