How much will they affect the New Orleans housing market and what other factors play a role?

Buying a home is one of the revered goals of obtaining and living the American dream. On any given weekend, potential homeowners wander through open houses looking for their perfect “forever” home. It is, however, a decision fraught with many steps. And, many experts agree that shopping for a mortgage should be a buyer’s very first step.

“Having someone who understands the complications of the various loan options and who keeps their eyes on the constantly changing market and interests rates is important,” says Ross Miller, president of Miller Home Mortgage, who has 19 years of experience in the business. “Monitoring interest rates is an important thing to do and an informed broker or banker monitors it minute by minute.”

“Mortgage News Daily” is one of the sources he uses and recommends. The online service tracks such things as secondary markets.

“Though stocks are one of the most commonly traded securities, there are also other types of secondary markets,” said Miller. “Investment banks also buy and sell mutual funds and bonds on secondary markets. For example, Fannie Mae also purchases mortgages on a secondary market. It buys from banks, mortgage brokers, and credit unions. That gives banks money to make more loans.”

For some background, Fannie Mae is the Federal National Mortgage Association (FNMA) and was one of the players in the subprime mortgage crisis. According to a 2008 CCH Mortgage Compliance Guide, the crisis came to the public’s attention when a steep rise in home foreclosures in 2006 spiraled seemingly out of control in 2007, triggering a national financial crisis that went global within the year.

“Before the crisis, Fannie Mae stimulated the housing market, which made up 10 percent of the economy,” says Kimberly Amadeo, president of World Money Watch. “That created wealth for homeowners who could then afford higher-priced homes. Fannie Mae also allowed low and moderate income families to get a financial cushion beneath them, and a higher standard of living, in the form of home ownership.”

After the subprime mortgage crisis, the housing market has been steadily righting its ship. According to data from Zillow, an online real estate database company, it is expected that a 30-year fixed mortgage rate will near 4.75 percent by the end of 2017.

The whole process starts with The Federal Reserve System (FED), the central banking system of the United States. It began in 1913 in response to a series of financial panics. Today one of the things it does is to raise or lower interest in efforts to create a healthier economy. The Fed uses the Fed funds rate as a tool to control U.S. economic growth. That makes it the most important interest rate in the world.

For example, all else being equal, lower interest rates tend to raise equity prices as investors discount the future cash flows associated with equity investments at a lower rate.”

At its March 15 meeting, the Federal Reserve’s Monetary Policy Committee raised interest rates by a quarter of a percentage point. According to a March 17 article in Kiplinger, the Federal Open Market Committee meeting was significant because it appears that the Fed is now committed to a path of steady rate hikes.

That means an era of historic low rates appears to be ending, and the actual cost of buying a home is set to rise, as millennials or members of Generation Y begin to enter into their prime home-buying years.

“Rising mortgage rates, inventory shortages and demographic shifts will be the main drivers of the U.S. housing economy this year,” says Zillow Chief Economist, Svenja Gudell, in a news release. “Buyers will have to spend more and more on their monthly payments.”

Local financial advisors, investors and real estate experts are also accessing how these higher interest rates and the economy will influence the New Orleans market.

“First off, rising interest rates are only part of the overall picture when it comes to the housing market,” says Jean Paul Lagarde, portfolio manager partner with Faubourg Private Wealth. “Permits are required before building and are thus seen as a “leading indicator.” In general, depending on the time period, as rates rise, measured by the 10-year treasury yield, building permits and housing start to decline.”

Lagarde explains that there are other periods where housing starts actually increase as rates increase.

“Which is somewhat counter-intuitive, if you are only looking at the housing market through the lens of mortgage rates,” he says. “These periods where housing starts increase as rates increase, economic growth, which is measured by Gross Domestic Product, is accelerating. Rates rising is a function of economic growth and the rising prospect of inflation.”

Lagarde believes, however, that the decision to purchase a house is not just one of interest rates or affordability.

“Confidence is another major component to that decision,” he says. “One has to ‘feel’ optimistic and confident in their ability to enter into a 30-year mortgage contract. Much of this confidence comes from wage growth that, in turn, affects disposable income. Currently, we are in a period of accelerating economic growth, and consumer and business confidence are at or near historic highs. For example, consumer confidence is the highest it has been in 196 months.”

One of the problems, however, is that some real estate agents, such as Rachel Wulff, who, along with her husband Kurt, has flipped 25 houses over the past nine years, believes that houses are now staying on market longer.

“Some buyers are worried that because interest rates are going up they may become too high and they won’t be able to make their monthly mortgage payments,” she said. “But even if rates were to raise two or three points, they will still be well below the rates in the ’80s. It’s still a good time to buy a house.”

Lagarde agrees that one thing to consider about the New Orleans housing market is the level of housing supply. He believes that currently there is a relative dearth of housing available. “New Orleans takes the limited supply problem to a new level, particularly in Uptown where there is no room for expansion,” he says.

Wulff sees the loss of Hollywood South as having a big impact on the local real estate market.

“When Hollywood South was thriving it drove up the demand,” she says. “There were productions that bought housing for their whole crew. Uptown was really hot. But I’ve seen a leveling off with that industry now that it’s moving to Atlanta. There’s certainly been an exodus of people in the film industry.”

Largarde believes that it is true that increasing rates, with all other factors being equal, can cause a temporary slow-down in housing, particularly if rates rise rapidly.

“However, once rates stabilize at the new higher level, housing will more likely than not start accelerating again,” he says. “This is due to expectations and how we are conditioned to feel about a certain rate. Our perception of rates are formed by our observation of them in recent history.”

“The red line represents a balanced market according to some housing analysts. Given that supply is below the balanced line, housing is in short supply,” explains Jean Paul Lagarde, portfolio manager partner with Faubourg Private Wealth. 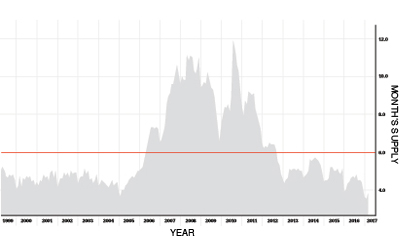 At a current level of 3.8, factoring the current pace of existing home sales, it would take 3.8 months to clear the supply of homes on the market. New Orleans is thus considered a supply constrained market.