Two local women with great entrepreneurial attitude have given Louisiana’s centuries-old rice industry something new to crow about. Over a casual dinner several years ago, Nan Wallis and Lindsey Beard were discussing their fondness for the Japanese beverage sake. Wallis had recently returned from a long trip across the U.S. where she’d noticed sake selections popping up in eateries everywhere, from white tablecloth restaurants to BBQ joints.

“We live in the land of rice!” Beard commented. “Why is no one making sake here?”

Her question prompted Wallis to investigate further. Soon after, Beard returned home to discover a bag of rice on her doorstep with a note from Wallis that read, “Someone should be making sake here and I think it should be us!”

Through her research, Wallis learned that sake is one of the fastest-growing liquor categories in America. The two agreed that they could only proceed with a sake brewing business if the rice was Louisiana grown. This stipulation proved to be their first stumbling block.

After making several trips to the LSU AgCenter Rice Research Station in Crowley, they discovered that Louisiana farmers only cultivate medium and long grain rice — sake is made with short grain rice. Dejected, they agreed if they couldn’t grow it, they couldn’t do it. But weeks later, on a Saturday afternoon, Wallis’ phone rang. She answered and Dustin Harold, head of the Rice Research Station said he had the perfect rice, a short grain rice variety called Pirogue developed by Dr. Steve Linscombe.

“It looks like a beautiful little pearl — short grain and high starch,” he reported.

“How soon can we get a sample?” Wallis asked.

“Oh, we’d have to grow it for you,” came the surprising reply.

Pirogue only existed as breeder seed, so in order to test the rice, an entire acre would have to be cultivated specially, requiring the women to purchase 7,000 pounds of seed.

“If we’re going to take a gamble, this is it!” Beard and Wallis agreed.
Five months later, Pirogue passed the brewing trials with glowing reviews and Louisiana was on the way to its first sake brewery.

Naming their new business Wetlands Sake in honor of the beauty and protection provided by Louisiana’s endangered wetlands, they decided to dedicate 2% of the profits from the company to the national nonprofit organization “Save America’s Wetlands.” A state-of-the-art sake brewery was constructed in the heart of the Lower Garden District and by March 2021, the product hit the shelves. Available in 8-ounce cans, Wetland Sake’s initial offerings included filtered and unfiltered sake with an ABV of 14% and sparkling sakes in passionfruit and blood orange at a lighter 6.5% ABV.

This spring, Wetlands Sake welcomed the public into their taproom adjacent to the brewery. Craft cocktail guru Susie Bohnstengel was brought on board to create small batch sake infusions to enhance the taproom’s offerings. Seasonally driven, some of the initial sake cocktails included an espresso sock-it-tini, a sake paloma, a sakerita and the cosmic sake smash along with filtered and unfiltered sakes on tap. Retractable doors allow the taproom to flow freely into a spacious outdoor area, perfect for the live music events hosted there.

In their passionate commitment to Louisiana, Beard and Wallis would not rest until every element of the growing and manufacturing process was done within the state. In 2022, with 15,000 acres of rice in the ground, the indomitable pair is looking forward to having their rice milled here too for the first time. “Milling rice for sake is a completely different process than our rice mills are usually capable of,” said Wallis. “Sake rice is polished, rather than milled. In polishing, the hull is never cracked. Our polished sake rice will compare in quality with the strictest industry standards in Japan.”

This summer will see Wetlands Sake expand into several surrounding Southern states, including Georgia. Get ready America! This Louisiana-born, entirely woman-owned sake brewery is positioned to take the liquor world by storm.

**For a look at the new Wetlands Sake Taproom, see this month’s Great Workspaces on page 62. T 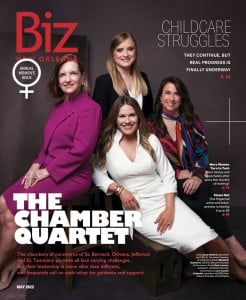