NEW ORLEANS – On Monday morning, as automobiles raced down North Claiborne Avenue, residents in the surrounding neighborhoods walked past blighted homes and rundown buildings that once housed thriving businesses, owned by African Americans.

But on the 1000 block of the busy avenue, leaders of local nonprofits and representatives from a nationwide bank gathered inside a sunlit courtyard surrounded by thick foliage. Some sipped chilled water and munched on breakfast pastries from Addiction Cafe; others stood in the shade.

Soon after 10 a.m., HousingNOLA unveiled its Community Development Finance Plan – their strategy to spur economic development and address the challenges of displacement in New Orleans – in this case, the Claiborne Corridor, near the Tremé neighborhood.

“The importance of today is making sure that we – number one – put out in person that we're going to need all hands on deck,” said Andreanecia Morris, the executive director of HousingNOLA, adding that they must garner support from private partners – not only government partners – for a substantial investment. 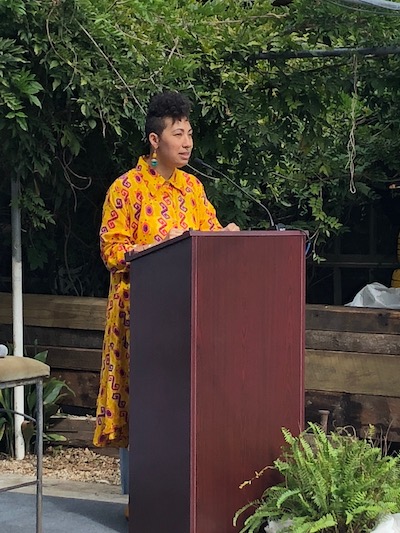 The press conference, which lasted a little more than hour, included a presentation of the plan by Morris; an introduction of the Lenders Roundtable from JPMorgan Chase executive director Shearita Despenza; and remarks from state representative Royce Duplessis.

(Right: Sonni Patterson closes the event with a poem.)

“Today was an opportunity for us to announce a million-dollar investment in HousingNOLA and several local CDFIs, under our national pro-neighborhood initiative, which supports building a capacity of CDFIs who in turn help build affordable housing and small businesses in neighborhoods across the country,” said Erika Wright, the vice president of global philanthropy for the JPMorgan Chase & Co. Foundation.

Over the next two years, HousingNOLA and partners will use the $1 million investment from JPMorgan Chase in the Claiborne Corridor, as part of the total $5.8 billion called for by the Community Development Finance Plan (CDFP) to address issues citywide.

Performers from ReNew Cultural Arts Academy also participated in the press conference, which highlights the organizations’ joint efforts to support arts and culture in the Claiborne Corridor, Wright explained.

Claiborne Corridor: its past and future

Morris described the neighborhood as “the heart of the city.”

“It is where the first (black) main street was before it was devastated by the interstate. This is the area that is most associated with our carnival cultures, where some of our great musicians were born and bred,” said Morris. “This community continues to keep giving and we've got to make sure that it can be sustained. We can no longer take from it. We must make sure that we are investing in this community, and give (residents) a chance to stay here and thrive.” 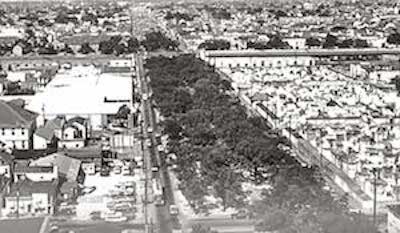 (Left: The Claiborne Corridor, before the 1-10 bisected the neighborhood. Photo from cidnola.com)

Claiborne Avenue, named for William C. Claiborne – the governor of Louisiana from 1812 through 1816, was first developed during the early nineteenth century. The avenue’s wide neutral ground was once lined with lush live oaks; and public green space served as a gathering point for African-Americans who lived within the surrounding neighborhoods.

But when the six-lane elevated I-10 Claiborne Expressway was constructed in 1969, African-American businesses suffered and eventually shut down. Homes were destroyed and residents were displaced.

“This was a vibrant black commercial corridor that was essentially decimated by the interstate, and we're attempting to bring some of that vibrancy, that economic development, back to this neighborhood, knowing that there are some who are still here, but then also bringing others in and giving them the opportunity to be here,” said Wright.

This year's competition also included grant-planning opportunities for local leaders, such as HousingNOLA, to identify the greatest needs facing their communities and develop data and community-driven neighborhood plans.

JPMorgan Chase will continue to work with HousingNOLA and its Lenders Roundtable to boost local small businesses, along with the production and supply of affordable housing, which will expand their efforts to drive inclusive growth in New Orleans.

Next, Wright explained, CDFIs will together launch a program for emerging developers in the region, to help them “close on deals in the Claiborne Corridor” and build more units of affordable housing.