Globalplex offers 278,000 square feet of warehouse space as well as 520,000 square feet of open storage pad space, bulk domes and green space. With that much laydown and warehouse space Associated Terminals has the ability to work with customers to develop customized cargo movement solutions that include transport, light manufacturing and storage.

Industries and investors are drawn to Globalplex by the availability of skilled laborers, deep water and cargo docks that can handle anything from Panamax vessels to inland barges, on-site rail access serviced by Canadian National and Kansas City Southern, as well as easy connections to nearby highways and airports. Through Associated Terminals, the Port of South Louisiana is able to provide solutions to meet the cargo handling needs of those customers.

In 2015 Associated Terminals and the Port of South Louisiana reached their 15th year working together at Globalplex to expand services and increase efficiency for customers—and the partnership has proved to be mutually beneficial. More than 1.7 million short tons of cargo moved through Globalplex facilities in 2014.

“The working relationship between the Port and Associated Terminals is excellent and keeps getting better. It’s a first class company with wonderful people looking out for the best interest of our customers. I couldn’t ask for a better partnership,” Paul Aucoin, Executive Director, Port of South Louisiana said.

Completion of the $19.5 million, 65-foot by 700-foot finger pier at Globalplex has streamlined the cargo handling process as well as promoted full utilization of the port’s two Manitowoc gantry cranes that are rated at 150 tons each. The finger pier is an extension of the general cargo dock that was funded largely by a $15 million grant from the Louisiana Department of Transportation and Development’s Port Construction and Development Priority Program.

“Before the finger pier, all the gantry cranes could do was shore-to-ship or ship-to-shore transfer.” Barry Hoth, Vice President, Associated Terminals said.

Today, cargo can be directly loaded or unloaded from vessel to and from barge utilizing those same gantry cranes.  Self-unloading vessels can also tie up to the finger pier and discharge cargo directly into barges through the ship’s conveyor system. The barge haul system at the finger pier allows barges to be shifted up and down the dock efficiently thus reducing the need for tugboats to move barges,” Hoth said.

There are many developments at Globalplex including the recent arrival of the first cement ship in 8 years. The cement facility, which includes dome storage, is one of the largest in the United States.

Several buildings are slated for improvements on the Globalplex site. “The complete renovation of Building 19 is a major project that will begin in a few months and is slated for completion the end of the first quarter of 2016,” Barry Hoth said, “It’s going to be a state-of-the-art facility that will house bulk materials as well as the final product.”

Building 19 will be expanded from 50,000 square feet to 105,000 square feet and will also house production equipment to accommodate the needs of a long-standing port customer. Hoth estimates that eight cargo and production jobs and 10 support jobs will be retained as a result of the Building 19 expansion project.

Additional projects include the conveyor system and warehouse at Building 71 and a recently completed $2 million roof on Building 76 to keep products housed in the facility safe from the elements.

High hopes for facility expansion also reside in the results of an upcoming Bond Commission meeting when members will vote on whether to fund construction of a new administration building on the Globalplex site. The proposed building will house offices for administrative employees of the Port of South Louisiana.

“It would be big enough for all of us to be under one roof. Right now we’re scattered,” Aucoin said.

Though Globalplex is one of many thriving parts in the Port of South Louisiana, Associated Terminal’s customer-centric style and innovative mindset has contributed to the port’s overall success.

The Port of South Louisiana was ranked as number one Foreign Trade Zone in the category of warehouse/distribution activity merchandise received in America according to the most recent annual report to congress.

“I like to tell people that the Port of South Louisiana is the most important port they’ve never heard of. Not only is it vital to our region and state, but also the entire country and world.

Over 50 percent of American exported grain leaves through the Port of South Louisiana. Globalplex allows us to offer unique cargo handling solutions for shippers on the lower Mississippi River,” Aucoin said.

In 2014 the Port of South Louisiana saw over 4,000 oceangoing vessels and more than 57,000 barges moving nearly 300 million short tons of cargo. 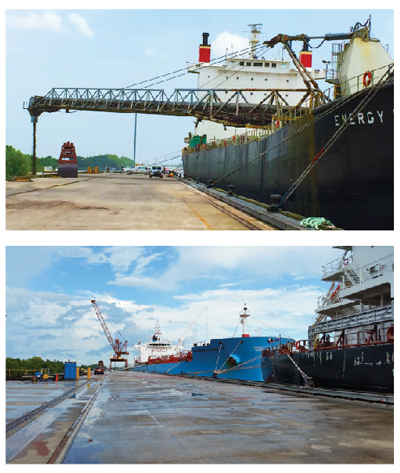