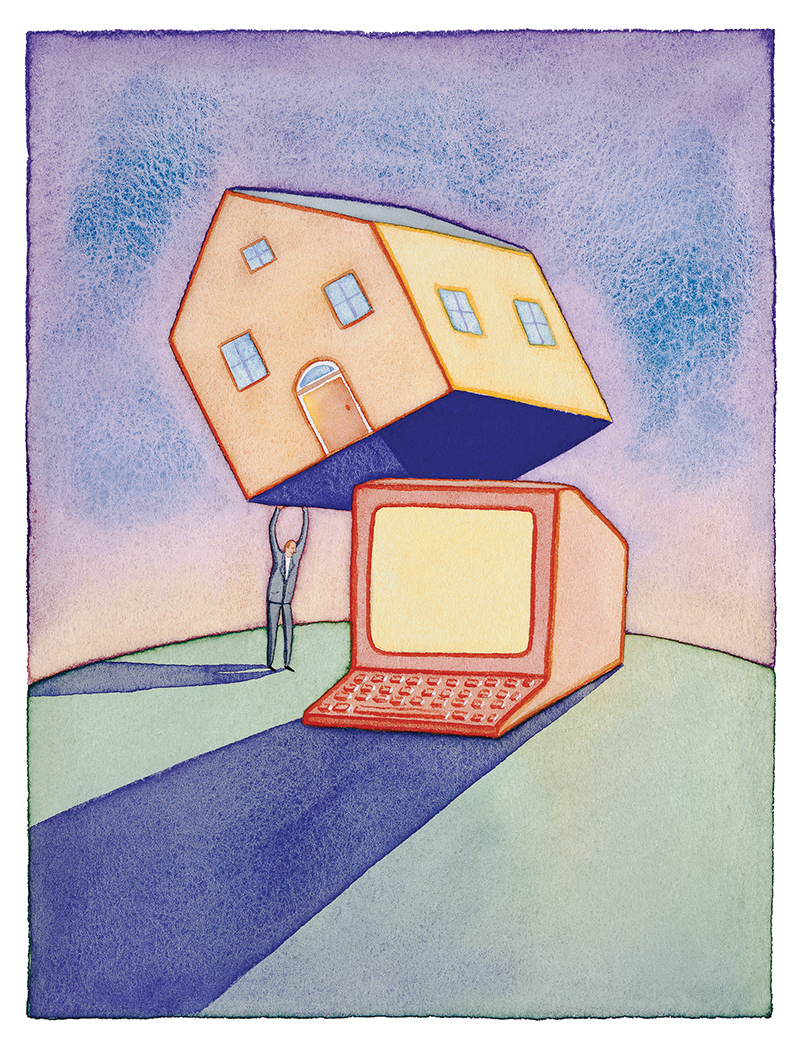 THE COVID-19 PANDEMIC HAS CHANGED THE way we live and work, and tech companies have been busier than ever helping people make the required adjustments.

Keith Frischhertz, co-founder & president of Monarch Technology, an IT solutions company, said when the lockdown began in March one of his biggest issues was finding computers.

For people who “don’t have computers at home, they rely solely on an iPhone or other smart devices,” he said, adding, “Procuring machines for customers was challenging given supply chain strains.”

Cloud-based services also quickly became strained due to a massive influx of subscriptions when so much of the workforce moved home.

“But to the credit of everyone we have dealt with, they have scaled their services in a surprisingly efficient way in order to meet demand,” Frischhertz said. “It still takes time to provision new clients, but it gets done and the services are running as expected.”

While Frischhertz said the work demands at Monarch Technology have started to level out, tech solutions company Leviton remains “busier than ever” according to Greg Rhoades, facility manager for the company.

Rhoades said the company has seen increased demand in particular for handsfree lighting controls. Among Leviton’s offerings are occupancy sensors in commercial bathrooms that turn lights on via motion and antimicrobial light switches commonly used in hospitals.

“Whether it’s in their home right now, or as they begin to return to their workplaces, people want to reduce their need
to frequently touch surfaces and devices,” Rhoades said.

In the real estate realm, Barret Blondeau, co-founder and CEO of Unlock’d — a tech real estate platform designed to make it easier for buyers and sellers to execute a transaction — said the company was already utilizing Zoom and Skype for much of what they did, so the transition to work remotely was seamless.

“However, showings were going down fairly dramatically, so we had to adjust,” he said. “We needed to back off marketing a bit to make sure the team was all right, and we took a pause for a good month.”

In late April, Blondeau reported that the company had received two new listings and Unlock’d renewed its marketing efforts as showings began to return.

“We have seen increased traffic on the website because more people are at home,” he said. “We are doing more virtual walkthroughs and we’re going to develop that [feature] more in the upcoming months to serve the market better going forward.”

Neel S. Sus, CEO of Susco, a Metairie-based software company, said the lockdown has forced many companies into upgrading their tech.

“At the beginning of the stay-at-home orders, a lot of businesses were operating with some pretty vanilla infrastructure, such as broadband and old routers,” he said.

Sus understands the change firsthand, as 90% of his company’s work was previously done in-office.

“High-speed internet from home is a big challenge—especially for workers that need to transmit voice and share screens,” Sus said. To meet the new demand, Susco has been busy helping companies replace old internal software with web- and mobile-based applications that can be used from any location.

One of the risks of so many new people working from home is that there is an even greater chance of security breaches.

“Due to people accessing corporate data from home-based machines, the risk of the client home machine not being secure is greater than ever,” Frischhertz said. “Additionally, that machine is likely accessed by multiple users, further complicating the issue. More people accessing a resource always increases the risk, and when there are multiple people accessing a machine for personal use as well as corporate use, the chance of the machine becoming compromised increases.”

Sus agreed that security risks have amplified and added that it’s important to stay on top of possible exposure.

“The challenge with remote workers is giving them easy but secure access to everything they had access to at the office,” he said. “I would encourage every employer to have all of their confidentiality disclosure paperwork much tighter than it was before.”

Sus also suggested not sending classified info over email, but rather using the phone to share anything they want to keep private.

Frischhertz said he has seen one big positive come out of the current pandemic: The work IT professionals do has come to the forefront.

“Typically, if an IT professional does his or her work well and prevents catastrophes because they stay on top of things, they’re perceived as doing nothing,” he said. “Interestingly, when something goes drastically wrong, the IT pro is again perceived as not having done his or her job correctly. It’s a sharp, double-edged sword. During this whole COVID-19 pandemic, it seems that many organizations from the top down are actually noticing the work their IT staff performs and the services they provide.”

Another major takeaway from the lockdown was the realization that businesses should have a contingency plan in place and need to be versatile enough to afford their employees the ability to work remotely.

“Flipping the switch to allow Monarch’s employees to work from home and support our clients took all of zero seconds because our entire infrastructure is cloud hosted,” Frischhertz said. “That setup may not be suitable for all businesses, but there is always a compromise to be made wherein critical systems can be made available with little effort and expense.”

Rhoades added that while a lot of companies may have feared employees working from home would result in a lessening of productivity, he has found that not to be the case.

“Employees are actually putting in more hours on average, dragging the laptop into bed postdinner to finish up more emails and tasks,” he said. “We’re also using more creativity than ever before, bouncing ideas off unrelated third-party spouses and children rather than coworkers who are often deemed ‘too close’ to the project. Better connections are being made from companies to customers, despite the physical distance.”