Red Beans and Ricely Yours

There is a mini debate about how red beans became a traditional dish on Mondays in New Orleans. Some say it’s because it was wash day and the beans could be simmered on the back of the stove while the laundry was being done. Others say it was because a big salty ham was generally served on Sundays, so on Monday there was a ham bone that needed to be used. In both cases, the marrow from that gently cooked bone turned ordinary beans into a hearty, luscious main dish that we New Orleanians passionately treasure.

And for generations, the red beans chefs and cooks have used for this culinary treat are almost always Camellia Brand red beans. Camellia Brand are currently the top-selling red beans in the country.

Sawyer Hayward came to New Orleans from the West Indies in 1850 — starting in the cotton business, but then expanding to source other items. In 1923, his son L.H. Hayward moved the business into an old cotton plant on Poydras and South Front streets — now Convention Center Boulevard.

Camellia distributes 19 varieties of premium dry beans, peas and lentils across much of the United States. The company also has a big presence in the Carribean and in Central America.

When fourth-generation owner and CEO of Camellia Brand, Vince Hayward, was 6 years old, he would go with his grandfather to visit the company’s plant.

“It was a typical warehouse with freight elevators and lots of manual laborers,” he says. “As a young boy, I was impressed by the scope and scale of it all and I was always excited to see the trucks and trains pull up to the loading docks to load our beans.”

On those visits, Hayward’s grandfather would often tell him that the success of the Camellia Brand depended on one thing — building good relationships.

“We are still building on those relationships with our growers, co-ops and grocers, some we’ve worked with for 40 to 50 years,” he says.

Currently, the business is located in a 50,000-square-foot warehouse in Elmwood, where the company processes and packages the products. Camellia employs between 50 to 75 people, some of whom have been with the company for more than 30 years. Hayward’s sister and uncle work full-time in the family business and some other family members take on ancillary roles.

The iconic camellia flower on the packages was inspired by Hayward’s great-grandmother Elizabeth’s favorite flower, the bright, long-blooming camellia. He also thinks the flower was a sign of one’s prosperity because if you had enough money to landscape your property with camellias, you were living pretty high on the hog.

“I think it also conveys how we take pride in our product,” he says. “Our name is on the bag and our product is going to be as good as it could possibly be. While others might go for a lower price, we go for highest quality. Our beans are non-GMO and gluten-free, and they are going to be the best beans you can buy. Our beans, peas and lentils are washed six times so you won’t ever find a hint of dirt, gravel or mud.”

Anything that has to do with the company’s image has to come across Hayward’s desk.

“I want to handle this iconic New Orleans business with care,” he says. “Our mission is to show the rest of the world about the red kidney bean, a bean that is woven into the very fabric of this city’s culture.”

According to local food writer Robert Peyton, red beans and rice is the quintessential New Orleans dish for a good reason.

“It’s something we grow up eating at home, at restaurants and in cafeterias on Mondays, with sausage, ham, pickled pork or just straight, no chaser,” he says. “With even the most inexpensive cuts, it’s filling and delicious and tastes like home.”

Hayward says that with so many negative things coming out about New Orleans these days, he’s glad Camellia Brands can show our culture in a positive light.

“I feel fortunate to live here and when I travel I’m proud to say I’m from New Orleans.  I can’t imagine having a better job.” 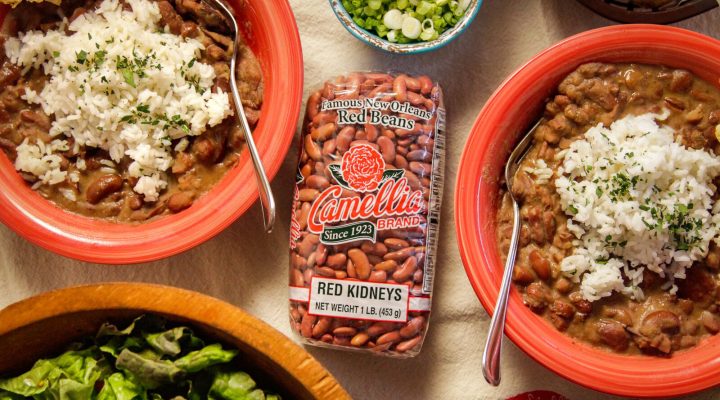 Happy Note: It is my honor to share that this past weekend, “Labors of Love” won a First Place for Best News Blog from The New Orleans Press Club. This was possible because of all the passionate New Orleans business owners and unique business ventures it is my privilege to feature in this blog on a weekly basis. The award also belongs to you.

New Orleans’ “Home Away from Home” Prepares to Reopen