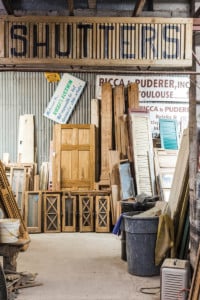 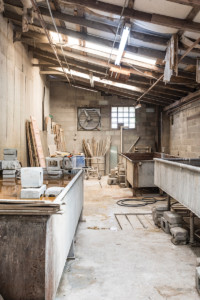 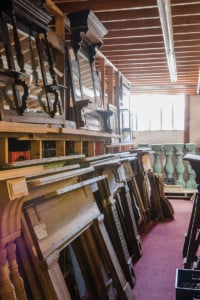 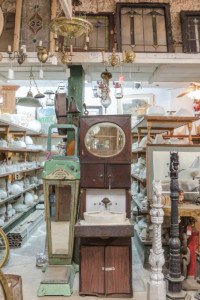 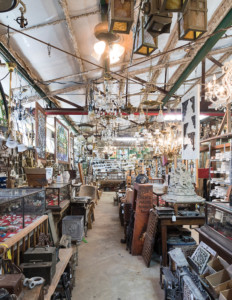 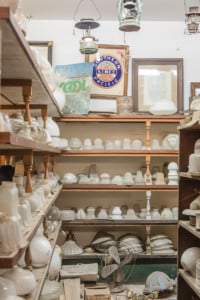 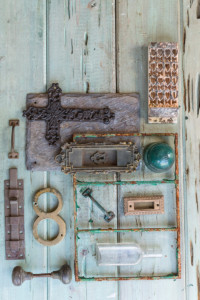 Reclaimed lumber, including an impressive number of cypress boards of every size, stretch the width of the sprawling warehouse at Ricca’s Architectural Sales in Mid-City, along with rows and rows of doors, windows and shutters. In the front, every manner of hardware — think doorknobs, pulls and hinges — is arranged and displayed in the main warehouse, which has also served as a flea market, but most notably in the 1930s was a space to build lifeboats and life jackets for LCVPs — otherwise known as Higgins boats —used in World War II for amphibious landings.

“It’s a constant battle to keep it organized and to also keep up with repurposing the material, cleaning it and bringing it back,” says owner Roland Ricca Jr., 31, who inherited the business in 2004 at age 17 after his father, Roland Ricca Sr., died.

In 1957, Roland Ricca Jr.’s grandfather, Peter Angelo Ricca, started the store at a space on Broad and Toulouse. Eventually it moved to Iris, then finally landed in its current location at 511 Soloman St., where it has grown to include three warehouses, a mill shop and a brickyard about a block away. There are also three additional storage warehouses.

“My favorite part is the strip outs [of the houses] and finding materials,” says Roland Ricca Jr. “Some houses haven’t been touched since Katrina. It’s a little sad to see, but we are glad we can save it, repurposing, restoring and giving it a new life.”

Not only is Ricca’s a third-generation business, but it’s also still a true family business. Roland Ricca Jr. learned the business from his uncle Angelo Ricca, who retired two years ago and who was in partnership with the senior Ricca. Many other members of the family — cousins, aunts and uncles — are still involved in the day-to-day operations, which includes demolition work.

Apart from recently launching a new website and working on ways to do business more effectively, Roland Ricca Jr. focuses on keeping things running smoothly and hasn’t changed much about the company since taking over. The biggest change was a few years ago when he conceived of the idea of a brickyard.

“I am really proud of the brickyard and taking an area that was really for storage and make it operational,” says Roland Ricca Jr.

Each area, from the stripping room and mill shop to the yard between the two, is bustling with workers — some who have been with the company since Roland Ricca Jr. was a child. The stripping room houses three 7-foot-by-16-foot galvanized steel baths filled with water and the chemicals needed to strip years of paint and grime from old wood. In the lumber area, a worker puts the finishing touches on a new door made from old cypress. From aluminum casts of antique iron work (gates, fireplace summerfronts, patio sets, hitching posts and lamp posts) to decorative wood brackets and finials made from old cypress, the company can create a reproduction of many architectural items that are getting increasingly hard to find, even by experienced salvage companies like Ricca’s. The yard is a treasure trove of iron gates, sinks, roofing materials, patio furniture, lampposts, metal sculptures and a colossal rusted anchor, for anyone who is in the market for one.

“I don’t take credit for any of it,” says Roland Ricca Jr. “My grandfather started this and had the dream and my father and Angelo did it all. It’s nice to see that it’s still growing and getting better. Now me and my cousins and aunts and uncles keep it going. I was thrown into it after my dad passed. I really enjoy it. I can’t see myself doing anything else.”