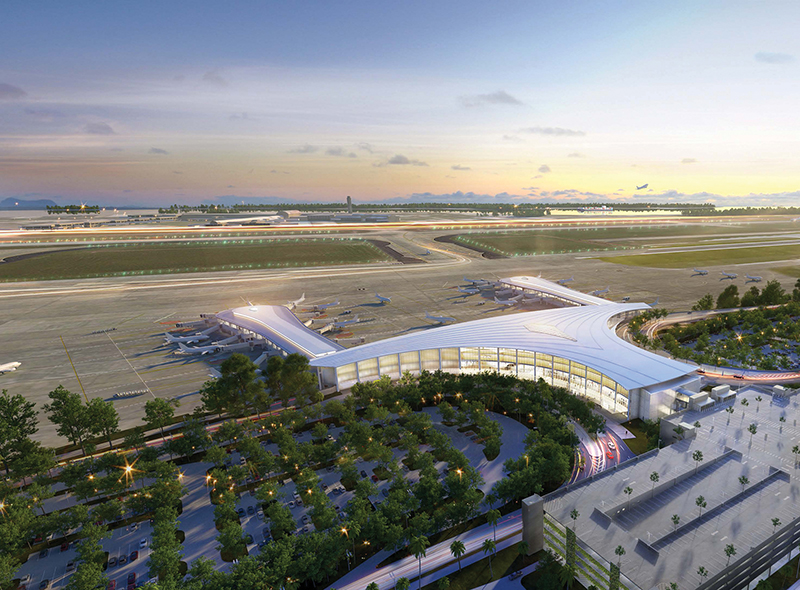 The opening of the brand new, state-of-the-art $1.3 billion North Terminal at Louis Armstrong New Orleans International Airport (MSY) stands as one of the most striking testaments to the economic growth of the region. From the public announcement in April 2013, through the beginning of construction in January 2016 and to the grand opening in November 2019, the 927,000-square-foot facility has been one of the most significant infrastructure projects in the history of Greater New Orleans.

Improving the airport, and especially international flight connectivity, has been a priority of GNO, Inc. for many years. This focus has directly resulted in a number of new nonstop flights, including British Airways to London, Copa to Central and South America, Condor to Frankfurt, and Air Transat to Montreal. MSY is now the #5 fastest-growing airport in America, over the past decade.

The building of the facility alone gave a significant boost to the local economy. With thousands of new construction jobs for area workers and collaborative opportunities for local businesses, the new terminal has been an economic stimulator since its inception. More than 40 food, beverage and retail outlets, including over two dozen restaurants, bars, cafes, and dessert parlors have found a home at the revitalized airport, introducing tourists and local travelers alike to famous New Orleans names like Emeril’s Table, Cafe du Monde and Leah’s Kitchen, to name a few. All signs point to continued stimulation for local businesses; in fact, it’s estimated that the new terminal will create $3.2 billion in economic benefits from tourism alone.

The new MSY consists of 35 gates spread over three concourses, with a design embracing modern architectural concepts and large glass windows to allow natural light inside, effectively reducing energy consumption. The North Terminal serves 16 airlines and an expanded number of international flights, including direct service to Europe for the first time since 1982 and MSY’s first ever direct flight to Montreal through Air Transat. The facility is also the third airport in the country to feature a gate-pass program, known as MSY Guest Pass, which allows visitors without airline tickets to access the concourse, where all of the shops and concessions are located — and that includes the music venues, which will feature local musicians performing every day at the airport.

The resources and amenities don’t stop at food and music, extending to practicality and convenience as well. Over 8,000 available parking spaces are available, and complimentary remote bag checks are offered in the economy parking lot. Free high-speed WiFi and a pin-code pairing system quickly connect passengers with ride-sharing apps like Uber and Lyft for ease of access. Efficiency is key, and the average TSA wait time mid-December 2019 was a mere 5 minutes, with the longest wait extending only 23 minutes.

Airports are often a traveler’s first impression of their destination cities, and MSY now stands to reflect the economic growth and modernization of the Greater New Orleans region. More than 300,000 passengers traveled through the new MSY in its first week, and those numbers will continue to climb as MSY — and the rest of the city — usher in a new decade of prosperity.

MORE IN THIS SERIES

A Musical Renaissance in the Birthplace of Jazz

An Industry on the Rise

Developing the Next Decade

Small Biz Rescue Off to Spotty Start; Some Banks Not Ready

Gootee Construction: Creating Healthier Communities Out of the COVID-19 Pandemic

Analysis: Federal Stimulus Bill Could Help Louisiana, but May Not Enough