NEW ORLEANS – Artist Margie Tillman Ayres is delivering a jolt of good cheer to kitchens around the country thanks to a series of designs she’s created for Pyrex, the 105-year-old glassware company known for its iconic baking pans and food storage containers. Now, when you bring potato salad to your co-worker’s crawfish boil, you can transport it in a vessel adorned with one of Ayres’ illustrated sloths or dancing stick figures inspired by New Orleans’ all-female Mardi Gras dance krewes. Click here, here or here to see some of her designs. 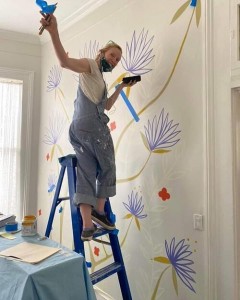 Ayres, a native of Natchez, Miss., graduated from the Savannah College of Art and Design a few months after Hurricane Katrina. Post-college, she began working in the art department of the New Orleans Jazz & Heritage Festival and then became a scenic painter for New Orleans-shot film and television shows. She has sold colorfully screen-printed flour sack towels and other creations at stores like Fleurty Girl and at art markets. She’s known for murals, illustrated portraits, watercolor collage, wallpaper and textile designs. In 2016, she founded a digital art, animation, pattern and design studio called Margie and the Moon.

In 2018, Ayres decided she wanted to take a risk and seek out new and bigger marketplaces for her designs. So, in May of that year, she hosted a booth at Surtex – the annual trade show for the “surface design” industry – at the Javits Center in New York City. The event connects visual artists with manufacturers, retailers, marketers and brand licensing companies who need designs for their products.

“I have two kids,” she said. “I realized I needed to step it up. I really just took a chance on Surtex, where artists go and show their portfolios to potential buyers. Prospective clients could be wallpaper companies, home decor companies looking for patterns or illustrations, Target, Pyrex, Camelbak and others like that. There are also children’s book publishers, calendar publishers, people who have the means to produce something on a larger scale and need artwork to help sell their products.”

Ayres collected a lot of leads but no real business from her first trip to Surtex so she “felt like a crazy person” when she returned a year later. But it was then that Pyrex got in touch to do a deal.

“I’m really glad I went back the second time because my work with Pyrex and several other national companies came from giving Surtex a second chance,” she said.

To date, Ayres has designed eight different collections for the company. She’s also landed work for York Wallcoverings, American Greetings, the Gift Wrap Company and Design House Greetings (available in Trader Joe’s) among others. It’s no surprise she attended the 2020 Surtex event and will head back up to New York when it happens again.

The national gigs have led to more work in New Orleans as well. Her digital portraits, in particular, have been in demand. For New Orleans marketing company Zehno, Ayres has worked on a project for Ursulines Academy. With Trumpet Advertising, she’s created designs for the Greater New Orleans Foundation.

“In the land of COVID, I’m just trying to stay open to anything that might come my way, so even doing family portraits that people get printed,” she said. “The whole illustrated portrait thing began because of COVID, in fact. People were afraid to show up for photo shoots, but these publications still need content, so it fills the void at least for a little while until people feel more comfortable meeting in person.”

Ayres said she “did it the hard way” when she attended her first Surtex because she brought mostly hand-painted illustrations.

“Certain companies prefer that,” she said, “but it seemed like to me most people are interested in digital artwork for the ease of printing,” said Ayres. “It depends on the process for each company, but each color costs more money to print. So Pyrex, for example, can only print two colors on each dish so you really have to pare down the color palette.”

Artists create digital designs in many ways. Some might start with a physical sketch and then scan it or re-create it using digital software. Others might literally draw an image using a stylus on an iPad. Ayres thinks her lack of formal training on tools like Adobe Illustrator may have helped her creativity. “I’m wondering if because I had to figure it out myself, I found my own little workaround and it makes the vector artwork look more hand drawn,” she said.

Ayres also said she’s been lucky that designs currently in vogue match up well with her optimistic sensibility.

“I think there’s a trend right now of people turning toward the simpler things,” she said. “A lot of my influence comes from children’s books. I think I got lucky with the timing. Images that convey joy have always been my focus.”