Purple and Gold, but Mostly Green

The movement is underway toward a more eco-friendly Carnival season.

Purple, green and gold may be the traditional Mardi Gras colors, but in the past few years the effort has picked up on the green side – with many local businesses, organizations and artists promoting efforts to recycle, clean up pollution and produce more ecofriendly throws, costumes and floats.

Cleaning Up Routes
Perhaps the most visible moves toward a greener Mardi Gras are the recycling efforts being made by the City along the parade routes. The New Orleans Department of Sanitation manages the parade route cleanup, but it also supplements its existing staff and equipment to handle high traffic areas, such as the French Quarter and Central Business District, with other companies’ efforts.

The Department of Sanitation does not supply recycling containers along parade routes, mainly due to resistance of people to recycle during parades and the contamination of recycling bins. However, the department does partner with organizations to promote the recycling of Mardi Gras beads. This includes Arc of Greater New Orleans, which collects Mardi Gras beads year-round to benefit people with developmental disabilities, Verdi Gras, a Mardi Gras recycling organization, and LifeCity, another organization dedicated to inspiring eco-friendly practices for local businesses.

The Department is still making a sanitation plan for 2015, but the city is planning to install approximately 200 solar-powered public litter cans in areas of high-volume pedestrian traffic. These cans reduce greenhouse gas emissions, as they compact the trash to require less frequent garbage truck collections. The cans are in addition to the 110 solar-powered public litter cans currently in use along major corridors installed by the Regional Transit Authority. This, the City believes, will also cut down on pollution along the parade routes.

Throw Local
One of the biggest waste producers of the Carnival season is the throws. About 25 million pounds of beads are imported to the city each year – many of which end up in a landfill, where they will never break down.

In an effort both to reduce waste and move some of the money currently spent overseas to local companies, krewes are beginning to buy locally made throws. A few companies provide not only throws that krewes can purchase from local vendors, but also items that are also more sustainable and less harmful to the environment.

ZomBeads, for example, creates beads that are made of paper at a cost of $2.25 per strand (if you buy a gross, or 144), as well as voodoo dolls and rice bags for $5 each. These prices put them on par with many of the plastic beads and throws found in stores. Last year, ZomBeads saw about $6,000 in sales, primarily selling to smaller krewes, such as “tit Rex.” ZomBeads founder Anne Rolfes finds smaller krewes to be more concerned about the environmental impact of their throws.

“When I started this, I thought it would be a no-brainer – that we’d go to these big krewes and say, ‘You’re already civic leaders. Why don’t you be a leader and blaze a new trail with this?’” Rolfes says. “In fact, what we found is it’s the smaller krewes that already understand that there’s a problem with all of this plastic and chemicals in Mardi Gras, and they are trying to do something different.”

Katrina Brees is founder of both the Greening the Gras Conference and I Heart Louisiana, a company that creates local, sustainable throws. She notes that greener throws don’t always have to be more expensive than cheap, imported throws.

“In one study, we found that many people were buying items that were as high as $20 per piece to throw to special people in the crowd,” Brees says. “We assume beads are cheap, but only cheaply made beads are cheap. Many beads we see thrown from parades that blink from batteries and have multiple plastic moldings cost over $5 per strand.”

Upcycled Costumes
One of the best parts of Mardi Gras is that it is an event that inspires plenty of crowd participation. Parade-goers often show their spirit with costumes, and even here, efforts are going green. Green designers are focusing on upcycling previously used fabrics, trims and knickknacks found at thrift stores, garage sales, and even Mardi Gras stores like Jefferson Variety to create fashions out of recycled materials.

For example, Oliver Manhattan recently created elaborate ensembles made from dog food bags and adornments, named "The Princess of Purina" and "The Duchess of Dogchow." Another artist, Tracy Hamlin, uses nutria pelts, alligator heads, oyster shells, Spanish moss and other assorted trinkets in her creations. Some designers turn visor caps upside-down to use as a base for stunning Mardi Gras headpieces.

To find these designs, every year hundreds of costume lovers descend upon the Carnival Costume Bazaar, now celebrating its 24th anniversary. Once held at Café Brazil and later Blue Nile, its home is now the Healing Center on St. Claude Avenue. The bazaar features a number of established and up-and-coming bohemian-style costume designers, most of whom use upcycled materials in their unique Mardi Gras fashions.

Smaller krewes, such as Kolossus, promote what they call “trashion,” or landfill-rescued, upcycled clothing that might include old band uniforms, upholstery samples and vintage Mardi Gras costumes.

The fuel that powers floats’ tractors is another aspect of a greener Mardi Gras. In 2008, Barry Kern, CEO and president of Kern Studios, told WDSU that his fleet of over 100 tractors is now powered by biodiesel, which burns cleaner, creates less air pollution and provides better mileage. It also presents a globally visible opportunity to publicize and inspire greening for other major events. Use of biodiesel benefits Louisiana soybean farmers.

Beads as Art
German artist Stephan Wanger recycles landfill-bound beads by using them to create murals and other art. He buys beads from the Arc of Greater New Orleans and St. Michael’s Special School, which sells them to benefit mentally disabled students. His murals are made with the help of the community, particularly local children.

“Beads create so much excitement after they’re thrown from the float to a person,” Wanger says. “It’s great energy and emotion to transform into artwork afterwards. The recycling part makes it even more charming because I give the Mardi Gras beads more life than they were originally intended.”

On average, Wanger uses 18 to 30 beads per square inch, depending on the size and design of the beads. His 2013 Guinness World record-breaking mural, the 8-foot-by-48-foot “Main Street in Louisiana,” used roughly over 2 million beads. He estimates that, in total, he has saved more than 15 million individual beads from the landfill.

Wanger is currently creating a new mural, “Life in the French Quarter,” which is set to break his own record. Sponsored by the Hotel Monteleone and The New Orleans Advocate, the mural depicts a second line coming out of the hotel. Proceeds from prints made of the mural will benefit local music nonprofit Sweet Home New Orleans and the Tipitina’s Foundation.

As more and more ideas take shape, the hope is that the business of Mardi Gras will become more mindful of our environment, and more financially beneficial to locals who are eager to show off their creativity and relentless Carnival spirit. 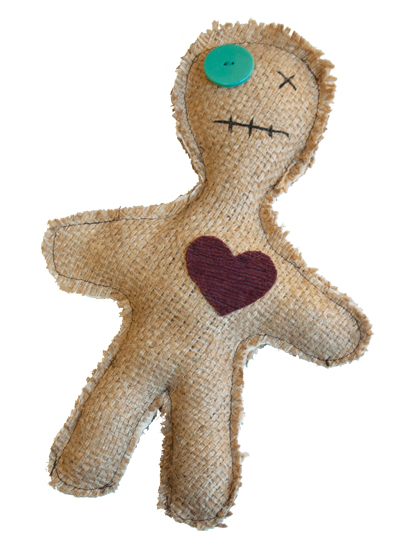 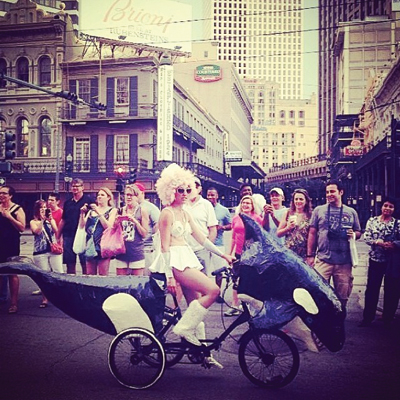 Photos courtesy of Zombeads and Crew of Kolossus

Verdi Gras estimates that superkrewes throw approximately $56,000 worth of throws per block, most of which are beads.

A multi-million dollar industry, beads are primarily manufactured in China.

Beads are non-biodegradable and made from oil in a process that can be very ecologically damaging.

According to the Ecology Center, beads are made with hazardous chemicals like polyethylene and no. 6 polystyrene, which contain hydrochlorofluorocarbons, a chemical that potentially causes cancer and other life-threatening diseases.

This is primarily true of beads with shiny coatings rather than clear plastic or glass beads.

Mardi Gras Cleanup By the Numbers

The Department of Sanitation will place between 50 and 100 additional cans along major parade routes for convenience and pollution prevention.

In 2014, the city collected 1,758 tons of trash during the final 10 days of Carnival season and spent nearly $1.5 million on sanitation.

Sustainable Throws to Watch For