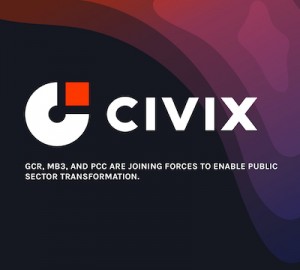 NEW ORLEANS – GCR Inc., an international public sector software and services firm headquartered in Metairie, announced that it and its subsidiaries – PCC Technology Inc. and MB3 – have rebranded as Civix.

“Over the course of decades, our company has evolved, and now it’s time for our brand to better reflect the full breadth of who we are and what we do,” said Tom Amburgey, CEO of Civix. “We ultimately chose the name Civix because it represents our civic commitment to enabling public sector transformation.”

Founded in 1979, the company serves state and local governments, airports, transit authorities and power plants, among others. Today, Civix provides software to more than 100 airports and 90 percent of U.S. nuclear power plants as well as solutions that manage records for more than 25 percent of U.S. registered voters, business services for nearly half of the country’s secretaries of state, and hundreds of billions of dollars in federal grants. The company said its technology products are backed by a deep bench of experts on airport operations, information technology, disaster recovery and community planning.

With a team of some 400 professionals in six U.S. states as well as Mexico and Canada, Civix is now organized into three discrete business units: transportation, government and grants.

Civix Government, formerly known as PCC, is a provider of software for state and local governments and secretaries of state. This year, the business unit named a new president, Mike Wons, and hired new vice presidents of development and of IT security, added dozens of developers and engineers, and revamped its client success team. Earlier this month, it opened a new Center of Excellence that will serve as a centralized hub for innovation in GovTech.

“We are entering a new era of technological advancement, and Civix will lead the way in reimagining how governments serve constituents and businesses,” said Wons. “We are laser-focused on developing a common industry platform that uses advanced technology to provide a modern, simpler user experience.”

“No one knows the aviation industry like our team, and we’re continuing to expand and apply that knowledge in adjoining areas, as we have with transit systems,” said Tim Walsh, the president of Civix Transportation. “Our rebrand to Civix is emblematic of the alignment that has taken place to connect technologies and experts across fields to tackle the biggest challenges and drive innovation. The sky’s the limit.”

Civix Grants provides a suite of technology products augmented by a team specializing in grants management and compliance as well as policy, planning and analytics. Team members include former state government grant and program administrators, workflow developers and planners who have implemented and administered more than $200 billion in federal grants on behalf of communities across the country.

“Communities turn to us in the aftermath of disasters to help them overcome devastation and transition to rebuilding, recovery, and opportunity,” said Angele Romig, the president of Civix Grants. “We take our commitment to them to heart, and as Civix, we are expanding and strengthening the products and services that sustain and empower governments.”

Folded into this business unit is the company formerly known as MB3, which provides a comprehensive grant management system designed specifically for state emergency management agencies. It manages tens of billions of dollars and has been used by states across the U.S. during some of the largest disasters in recent history.

“Our evolution to Civix is a major leap forward that positions us for greater impact in the communities we serve,” said Matt Blakely, the CTO of Civix who founded and was CEO of MB3. “The name change reflects our business units coming together to form one organization with a common mission, culture and standard of operation.”

Several of the company’s industry software solutions – such as AirportIQ, ElectionNet, and EMGrantsPro – will also undergo name changes.

Civix is included in the portfolio of HKW, an Indianapolis-based private equity firm investing in middle-market companies across North America.

Dolliole Elected to Airports Council Board of Directors

City Provides Sneak Peak of Pedestrian-Friendly Ideas for the Quarter

Louisianians Protest for $600 Benefit, Against Evictions