Proud to be PINK

Now in its third year nationally, the American Cancer Society’s Real Men Wear Pink campaign encourages men to spend the month of October wearing pink in an effort to raise both money and awareness for the fight against breast cancer.

Last year, the New Orleans campaign raised $190,000, finishing sixth in the nation out of 250 campaigns. This year, 25 rookies and nine All Stars (men who have participated before) are attempting to raise $250,000 for the cause. Hailing from all different industries — including healthcare, real estate and construction, hospitality, finance, law and even auctioneering — these 34 men are determined to use their connections and standing in the community to help eradicate the second leading cause of cancer death in women (next to lung cancer).

Money raised during RMWP is restricted to ACS’s breast cancer initiatives, the largest of which is research. ACS currently funds $64 million in research against the disease on a national level. Locally, ACS funds many programs, including Reach to Recover — which matches breast cancer survivors to newly diagnosed women in order to form a sort of mentorship — and Road to Recovery, which provides volunteer drivers to assist those who need it with free transportation to treatment. Funds also go to support the Patrick F. Taylor Hope Lodge which, since opening on River Road in 2006, has saved patients about $30 million in lodging costs alone.

On the following pages, Biz New Orleans is proud to highlight the efforts of three of this year’s Real Men Wear Pink. Please join us in recognizing and supporting their efforts this year to continue leading the nation in the fight against this horrible disease. To donate to any of the candidates, visit RealMenWearPinkACS.org/NewOrleansLA 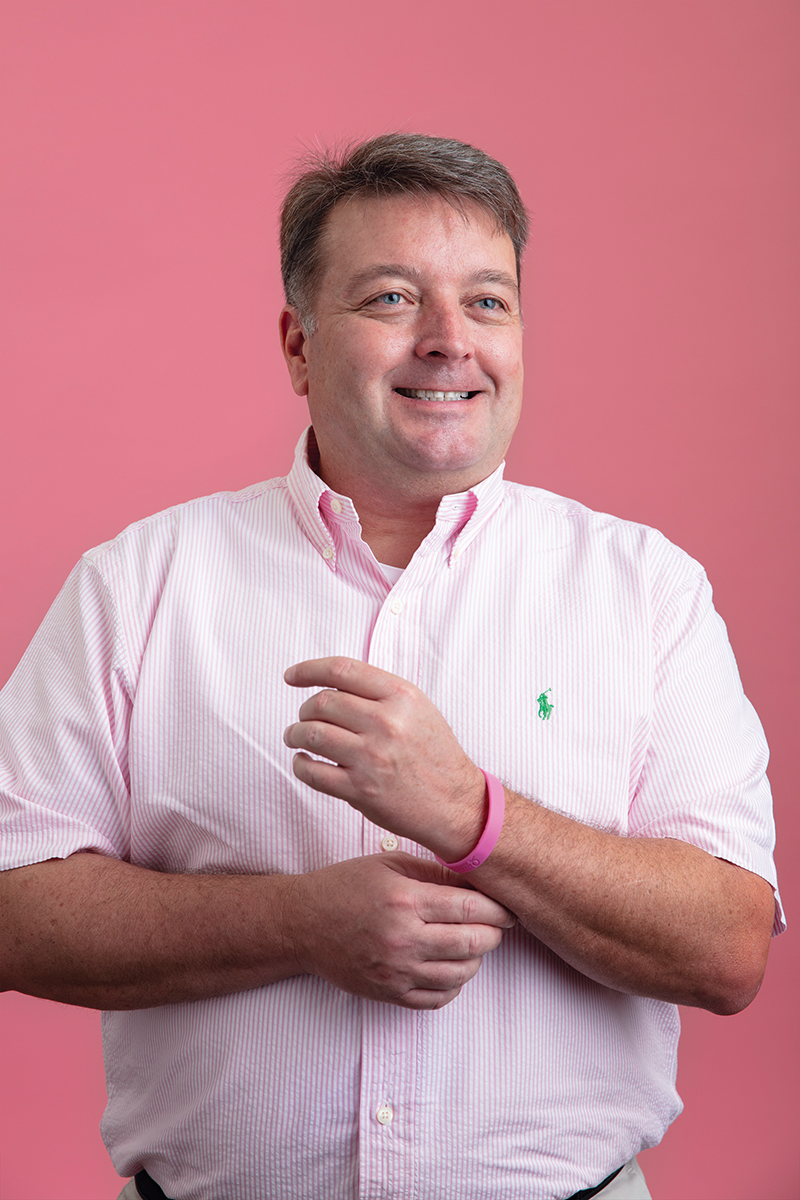 Manager of Emergency Preparedness at Entergy

After two years of participating in Real Men Wear Pink in Charlotte, North Carolina, John Overly switched over to the New Orleans campaign following a move this past spring.

“I arrived in New Orleans on May 7, and on May 8, I called Lori and said I wanted to join Real Men here,” said Overly.

His passion for ACS and particularly for the fight against breast cancer is intense, the result of losing the love of his life to the disease, his wife of 17 years, Donnetta, who lost her battle on Oct. 26, 2016.

“She was diagnosed with stage 2 breast cancer in 2008 and underwent two rounds of chemo plus a radical bilateral mastectomy and reconstructive surgery,” he said. “They thought they got it all.”

In the fall of 2015, however, the couple was shocked to learn Donnetta’s cancer had returned, this time as stage 4. She died one year later.

“That first day of her chemo 11 years ago, I wore a pink shirt to show my support for her,” said Overly. “I’ve worn a pink shirt every Thursday since. When I found out about this program I completely jumped on board. I felt her fight wasn’t finished yet. Now is the time to pick up the baton on her behalf and carry it since she can’t do it anymore.”

On top of raising funds for his own campaign this year, Overly is serving as a mentor to other participants.

“I’m making every effort to help us all remember why we’re here, why we’re doing all of this work, and that is to spread awareness and support the warriors, the survivors. There’s friendly competition, yes, but in the end, we’re a team.”

Apart from skin cancers, breast cancer is the most common cancer type in women. 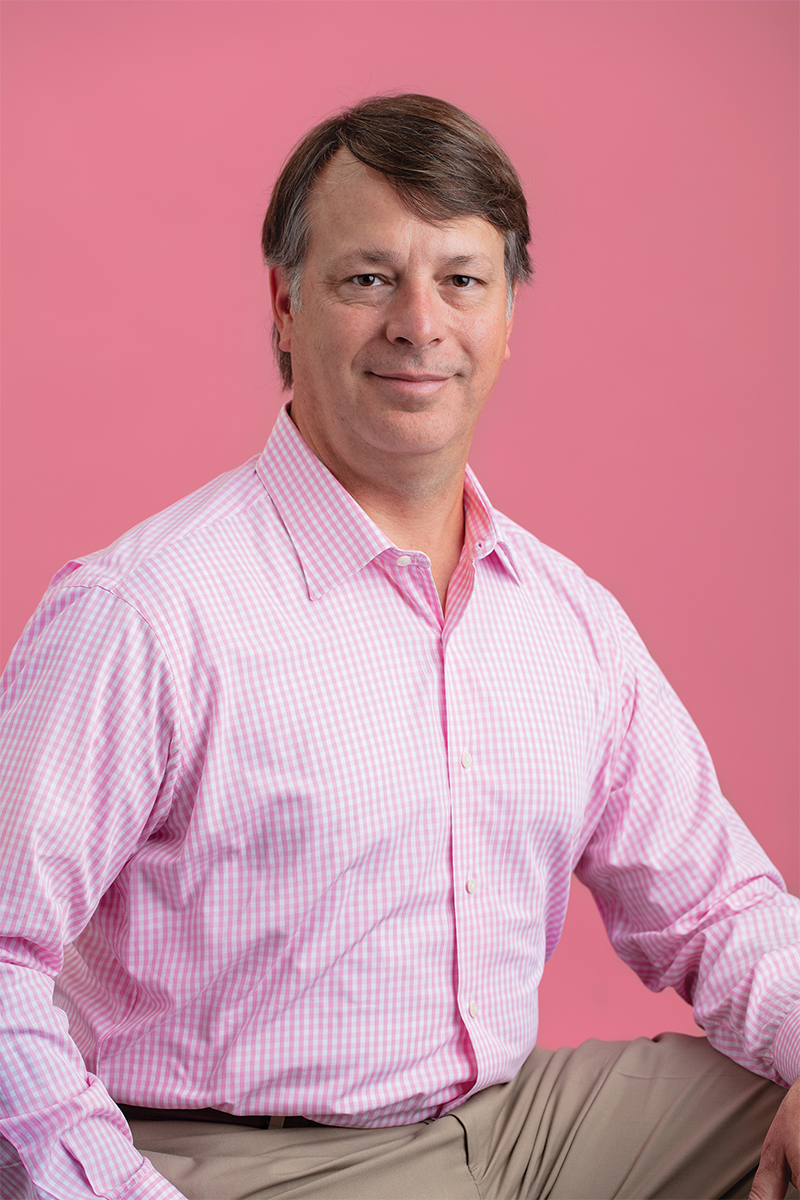 It was through a good customer of his restaurant that Melvin Rodrigue, president of Galatoire’s learned about Real Men Wear Pink.

“I thought about it and how we’re so fortunate to have such a passionate and loyal customer base and that this is such an important cause for which to leverage it,” said Rodrigue, who, on a personal level, has had an aunt, a grandmother, a sister-in-law and many friends who have battled breast cancer. “It was a real no-brainer.”

During the month of October, the Real Men Wear Pink campaign logo will appear on menu inserts and table tents throughout Galatoire’s for an effort Rodrigue is calling “Real Men Drink.”

“We’ll be serving Sazeracs, old-fashioneds and martinis,” he said. “For every cocktail purchased, $1 will go toward the campaign. Thanks to a $10,000 sponsorship from Sazerac, we’re confident we can make well over $20,000.”

On August 29, the final month of this year’s Galatoire’s Summer Wine Dinner Series was “An Evening of Rose.” It also benefited the campaign. Rodrigue said he still has other ideas formulating.

“This is such a prominent and important event in our city,” he said. “I’m just so proud to be involved.”

At this time, there are more than 3.1 million breast cancer survivors in the United States. This includes women still being treated and those who have completed treatment. 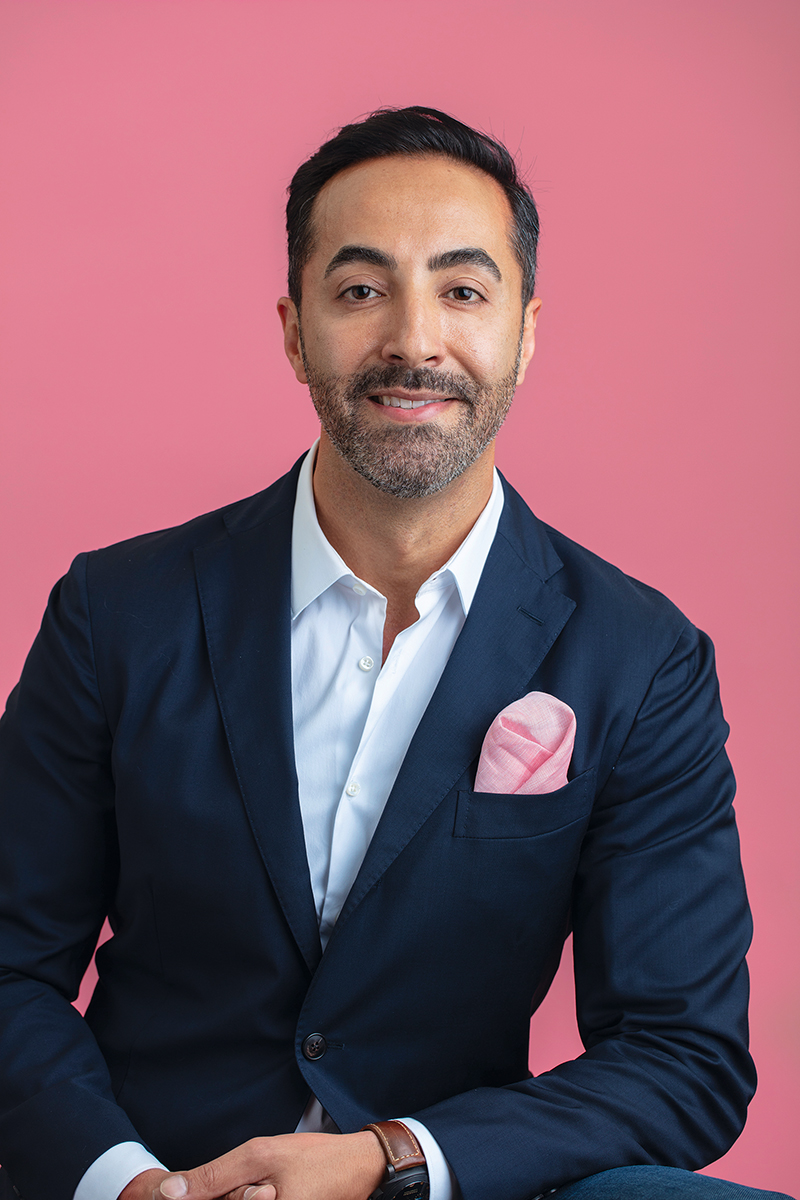 Last year was Dr. Ali Sadeghi’s first year with Real Men Wear Pink and he came on strong, leading his fellow members to become the highest fundraiser in New Orleans, the second-highest in Louisiana and the 14th highest in the nation by raising $40,309.

In his practice, Sadeghi said he does a lot of surgery and reconstructive surgery on breast cancer patients.

“These patients come in so much that we have time to get to know them,” he said. “They become like family. They are the most thankful patients, too, that I’ve ever had.”

Last year’s team total reached just shy of $200,000 and this year, as chair of the campaign, he said he’s committed to taking the team to its goal of $250,000. He hopes to be able to contribute a good chunk of that total on his own through an array of efforts.

In his offices, Sadeghi is selling T-shirts that read “Tell Cancer Bye Felicia,” along with custom ice packs. He’s also hosting a fundraising gala on Sept. 27 at the Arbor Room in City Park that will include a fashion show featuring some of his breast cancer patients, as well as husbands and doctors. Helping to promote an active lifestyle, Sadeghi will host a volleyball tournament on Oct. 2 at White Sands Volleyball Courts that welcomes team and individual participants. Individuals are $10.

In 2018 alone, approximately 268,670 new cases of invasive breast cancer will be diagnosed in the United States.

Good News! Death rates from female breast cancer dropped 40% from 1989 to 2016. Since 2007, breast cancer death rates have been steady in women younger than 50, but have continued to decrease in older women.