Progress at the Port

When Paul Matthews became the newest Port of South Louisiana Executive Director in January 2022, he was tasked with carrying on a mission that has been top of mind for Port leadership for decades: making the Port even more attractive for maritime commerce and industry. Part of that task involves securing grants at the federal and state level in order to improve infrastructure, stimulate business and create jobs for locals throughout the Port’s 54-mile jurisdiction and beyond. Now, thanks to two recent grants, that mission is getting a major boost.

In September, the Port received a grant totaling $955,339 from the Department of Homeland Security Federal Emergency Management Agency, which will provide critical funding to advance the Port’s cyber security framework and Geographic Information System.

A substantial portion of the grant, totaling $695,389, will be used for enhanced cyber security that will protect Port assets, operations and employees from external threats. These advancements will include integrated layers of cyber security technologies such as installation, configuration, initial and continuous assessment, 24/7 monitoring, management and vulnerability scanning, real-time detection, network remediation, quarterly penetration testing, advanced training, troubleshooting, decryption of ransomware encryption and related functions to protect against technology advancement of cyber terrorist threats. The Port of South Louisiana will supplement funding for this project by 25 percent, for a total project investment of $927,186.

“We have contracted with Evalv IQ to evaluate our security systems that will protect us against cyber threats,” Matthews says. “The commerce that happens along the lower Mississippi River at the Port of South Louisiana is intertwined with the national security of the United States. The funds awarded by FEMA will go directly toward solidifying the sustainment of cyber security protection and assist in preventing an outside threat of causing human loss of life, structural devastation or economic catastrophe. We are looking at all of our systems and procedures and making all necessary changes to best protect us from any attack.”

The FEMA grant also includes $259,950 that allows the Port to enhance its Geographic Information System in order to provide up-to-date spatial information to Port security personnel and public safety agencies along the lower Mississippi River. GIS is currently used by the Port as a tool for business development, to depict available sites within the district along with adjacent and/or proximate transportation infrastructure such as rail lines, pipelines and water lines. The project also will provide up-to-date information to maintain Port-wide risk management for critical infrastructure, transportation and utility networks, and the location of hazardous materials. The Port will also contribute a 25 percent match for this project, bringing the total investment to $346,600.

“GIS is a mapping tool that has already proven to be beneficial to business development for our Port personnel, site selectors and industry partners in our jurisdiction,” Matthews says. “We know the cyber and terrorist threat landscape is evolving rapidly, and protecting against potential external threats requires rapid monitoring and response. GIS will be another tool in the chest to further provide the security necessary within our jurisdiction.”

Additionally, an enhanced GIS helps the Port improve its maritime domain awareness: the effective understanding of anything associated with the global maritime domain that could impact the security, safety, economy or environment of the United States.

“Maritime domain awareness is a key component of an active, layered maritime defense in depth,” Matthews says. “It will be achieved by improving our ability to collect, fuse, analyze, display and disseminate actionable information and intelligence to operational commanders.”

Separately, the U.S. Economic Development Administration awarded a $50 million federal grant to the H2theFuture initiative, a partnership led by Greater New Orleans, Inc. and its affiliate, Greater New Orleans Development Foundation. The grant will enable 25 partner organizations to develop a clean hydrogen cluster strategy in South Louisiana, spanning the clean hydrogen life cycle from research and development at Louisiana universities to an end-use project at the Port of South Louisiana. In addition to helping create and retain jobs in Louisiana, the strategy will substantially lower carbon emissions in the South Louisiana industrial corridor.

This award is one of 21 projects from around the country chosen from 529 applicants as part of the Build Back Better Challenge. The awards were funded by a $1 billion appropriation from the American Rescue Plan Act, which aims to boost economic recovery from the pandemic and rebuild American communities, including those managing decades of disinvestment. The grant will be supplemented by $24.5 million in matching funds provided by the State of Louisiana, bringing the total H2theFuture project size to $74.5 million.

The H2theFuture coalition will execute projects across five interrelated work streams, which are each individually funded by this grant. The work stream that affects the Port of Louisiana is called the H2Public Private Partnership. At the Port, the funds will be used to build a clean-fueling station for a new fleet of hydrogen-powered river vessels.

“This will be first-in-the-nation technology,” Matthews says. “This investment will trigger private investment in more than 16 hydrogen-powered tugboats by a private partner. This project will create jobs and economic growth, drive inclusive opportunity and protect the environment.”

The clean-fueling station will produce green hydrogen (made from water) as opposed to traditional gray hydrogen (made from natural gas). The hydrogen is extracted from water by an electrolyzer, which is powered by offshore wind-generated electricity. The resulting  H2 molecule has a zero-carbon footprint. This hydrogen can then be used for fuel, as well as a feedstock for the production of ammonia (for fertilizer), refining oil and steel, and other processes. According to McKinsey & Co., a global management consulting firm, green hydrogen has the potential to reduce total emissions produced by hydrogen in Louisiana by as much as 68 percent.

“Securing one of the coveted Build Back Better Challenge awards solidifies Louisiana’s status as a global leader in the energy transition and a prime location for renewable energy investment and innovation,” said Don Pierson, secretary of Louisiana Economic Development, in a press release at the time of the announcement. LED is another of the 25 partner organizations in H2theFuture. “An economic development project of this scope and complexity requires an extraordinary level of stakeholder collaboration and cooperation.”

Louisiana’s existing energy infrastructure—and its ranking as the national leader in per-capita use of industrial H2—could put the state in a prime position for establishing a clean hydrogen cluster.

“The Port of South Louisiana has a long history of fueling the nation and the world,” Matthews says. “Our Port has committed to leading America’s energy transition along the lower Mississippi River. This is a small, yet meaningful step in a larger movement to reduce our carbon footprint and broaden the energy economy for the families of South Louisiana.”

According to GNO, Inc., another significant aspect of the H2theFuture strategy is the retention and “upskilling” of the state’s workforce. According to economic data analytics advisors at Emsi, Louisiana has seen more oil and gas job loss than any other U.S. state, with nearly 22,000 positions lost from 2001 to 2020.  But many of the trade skills that will be required to run such a cluster will be directly transferable from oil and gas workforces, meaning a workforce gap might not only be filled but closed completely as more jobs are created in clean energy.

Of course, GNO, Inc., the Greater New Orleans Foundation and the H2theFuture coalition are not leaving the fulfillment of that potential to chance. Specific outreach and education initiatives will create pathways for local professionals to explore clean energy opportunities, and the coalition will address economic, environmental and social challenges through partnerships with local HBCUs including Dillard University, Southern University and A&M College in Baton Rouge, Southern University of New Orleans and Xavier University of Louisiana.

With all these community-wide efforts and internal Port advancements combined, South Louisiana’s industrial corridor could soon see increased foreign and domestic investment within the River Parishes region and the state, as well as more jobs and opportunities for our homegrown workforce.

“We’re excited about the endless opportunities that the future holds as we diversify our energy industry,” Matthews says. 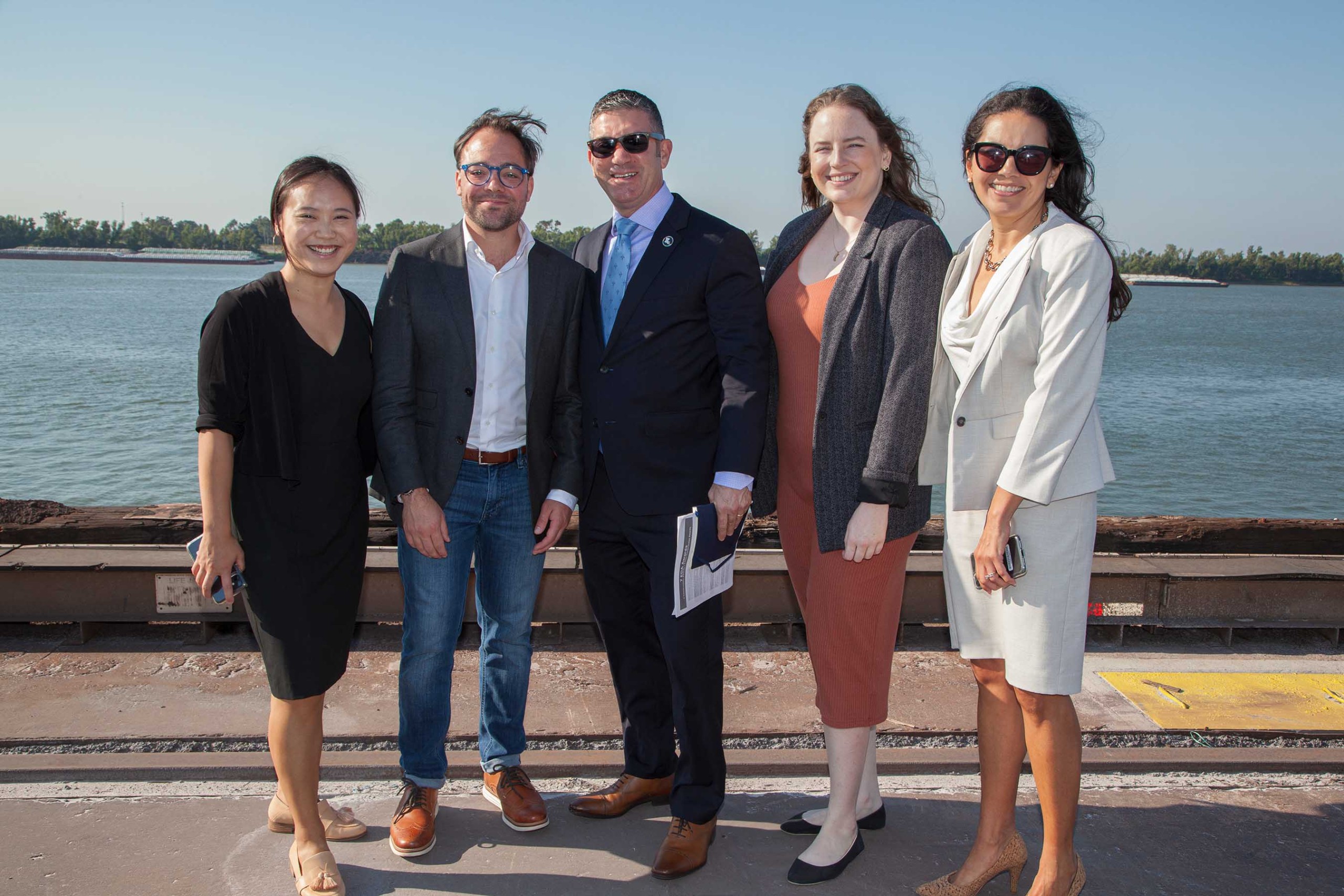 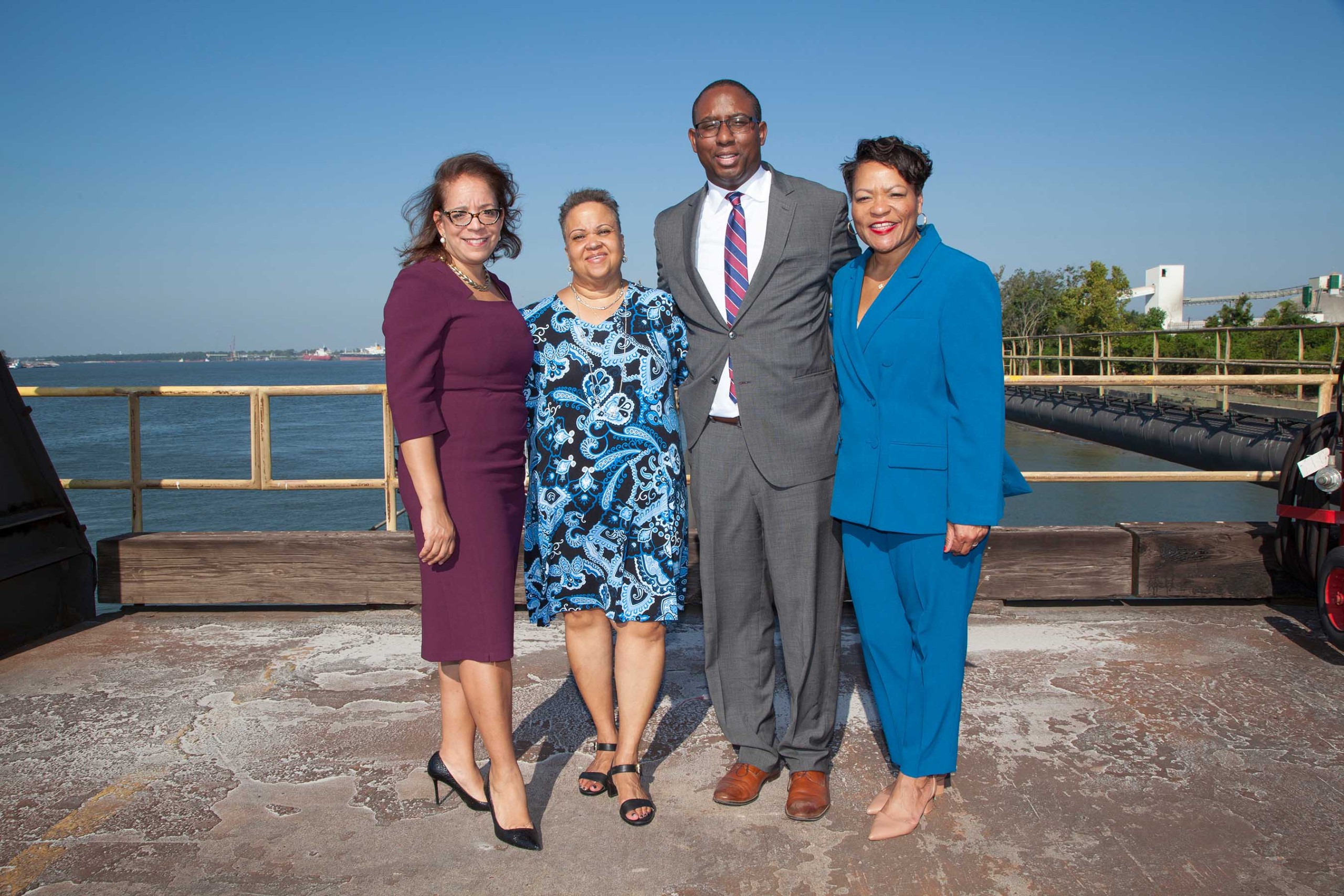 The user interface for the Port’s Geographic Information System, which is being upgraded as part of FEMA’s grant.