In the light-filled French Quarter executive offices of The Historic New Orleans Collection on Chartres Street, deputy director Daniel Hammer notes his view of Conti Street and the historic plaque in front of the nearby courthouse. Hammer admits that before moving into space in 2012, he questioned the usefulness of such plaques.
“I can’t tell you how many people stop to read that thing,” says Hammer. “Sometimes they are holding a Hand Grenade. Even those here to have a good time are interested in the history. It has informed my outlook on our future.”

In fact, it seems everything in the well-appointed suite of offices and meeting rooms — located in the three-story Perrilliat House — is designed to inform the outlook of the staff at THNOC.

Surrounded by furnishings and artwork from the museum, which was founded in 1966 by Gen. L. Kemper Williams and Lelia Hardie Moore Williams, the offices serve as both a practical space to conduct day-to-day business and an extension of the galleries used to display the collection. 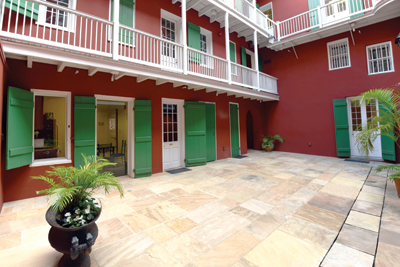 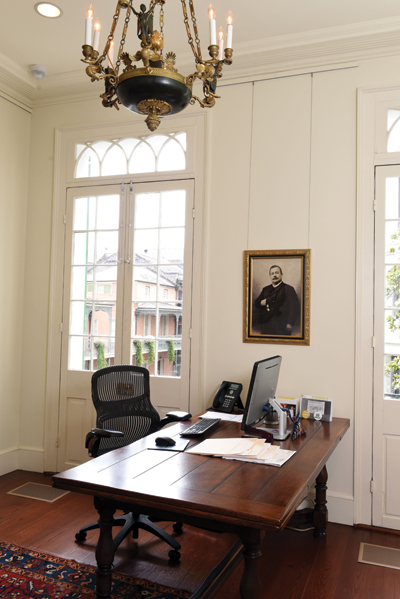 LEFT- The property housing the executive offices of The Historic New Orleans Collection was built by François Marie Perrilliat in 1825. It is made up of four connected row houses, with a courtyard and additional buildings in the back. RIGHT- Deputy Director Daniel Hammer’s office has a view of Conti Street and the nearby courthouse. French doors with leaded glass and transom windows lead out to the balcony.

The museum’s vast holdings — more than 1 million items — comprise objects depicting the history, culture and evolution of New Orleans, the Gulf South and Louisiana. In addition to the organization’s galleries, the William Research Center is also open to both scholars and the public, in keeping with its mission to share the region’s history with the masses.

“I love to have people come and meet here, because it’s beautiful,” says THNOC Executive Director Priscilla Lawrence. “[Chairwoman] Mary Louise Christovich has been on the board for close to 40 years. She set the standard for the spaces being as beautiful as we can make them. Not just the offices, but also the galleries, reading room and courtyards. She taught us to pay attention to the aesthetics.”

The property, built by François Marie Perrilliat in 1825, is made up of four connected row houses, a courtyard and additional buildings in the back. Koch & Wilson renovated the building, bringing it back to its original grandeur, featuring “Paris green” shutters, wide-plank pine floors and the arched bays in the front exterior. The designers also outfitted the space with shelving and cabinetry to serve the needs of its users, while at the same time staying true to the building’s architecture and residential feel.

“Historic spaces make one feel connected to all of those who’ve been there before, and the progression of the use of space is always a fascinating story,” says Lawrence. “I believe this was a warehouse and shops downstairs and a house upstairs in the early 20th century. Then it was an apartment upstairs and a restaurant and shops downstairs. Now, it is offices and meeting spaces and galleries.” 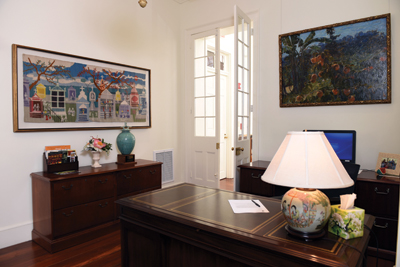 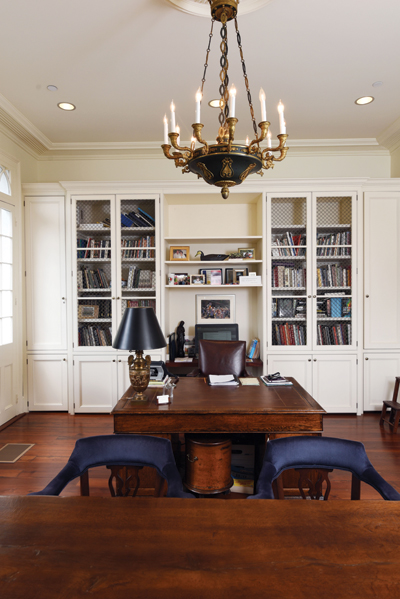 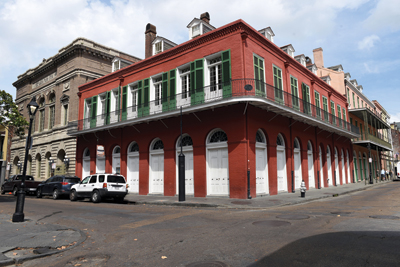 TOP LEFT- The offices are furnished with artwork and pieces from the museum’s collection, which is made up of more than 1 million items. TOP RIGHT- Executive Director Pricilla Lawrence’s office is outfitted with custom, built-in cabinets and shelves. “Historic spaces make one feel connected to all of those who’ve been there before, and the progression of the use of space is always a fascinating story,” she says. BOTTOM- Located on Chartres Street, the building underwent a complete renovation in 2012 by Koch and Wilson Architects.

Light floods the expansive rooms, which feature transom-topped French doors leading to balconies overlooking Conti and Chartres streets. A grand chandelier hangs in the Destrehan Boardroom, which can be closed off by green shutters, or opened to allow a view of the French Quarter.

“So much of our mission is about being here in the French Quarter,” says Hammer. “When we are having a meeting and a second-line goes by, we chuckle and go on about our business. When a truck goes by and is too big but somehow got in, and the building shakes, that’s not so amusing.

Biggest Challenge: Meeting the needs of a modern office environment in a 19th-century building

Standout Feature: Striking spiral staircase and vast Destrehan Board Room with views of the French Quarter.