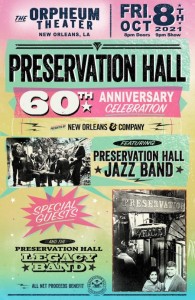 NEW ORLEANS – Preservation Hall will host a 60th Anniversary benefit gala concert at 9 p.m. Friday, Oct. 8 at the Orpheum Theater. All proceeds from the event will fund the Preservation Hall Foundation’s mission to “Protect, Preserve and Perpetuate New Orleans music and culture.” New Orleans & Company is helping produce the event. Tickets will go on sale to the public at 10 a.m. Friday, July 23 at https://bit.ly/PresHall60th.

“New Orleans is a city of musical royalty. Many of the Hall’s musicians performing today can trace their family history back to the birth of jazz. Preservation Hall was established to honor these important African American families and their gift to the world,” said Ben Jaffe, Preservation Hall creative director and board chairman, in a press release. Jaffe is the son of Preservation Hall founders Allan and Sandra Jaffe.

The show will feature “four generations of Preservation Hall musical masters that are the continuous link to the source of American music the Hall was established to celebrate” along with speakers and surprise musical guests.

Copeland’s Family Meals Provide Funding to Son of a Saint