NEW ORLEANS —The City of New Orleans provided an update on preparations, parking instructions, traffic restrictions and safety regulations in advance of NBA All Star Weekend and the 2017 Mardi Gras season. Parades are scheduled to begin on Friday, Feb. 17.  The NBA All Star Game activities start midweek next week.

“We have the great privilege of hosting this year’s NBA All Star Game, along with our normal Mardi Gras activities,” Mayor Mitch Landrieu said. “It takes a great team of professionals in our public safety agencies and at City Hall to coordinate these types of major events. This is especially true this year as we continue to respond to the tornado in New Orleans East. For our residents, they should expect as heavy of traffic impacts for the first weekend of Mardi Gras as we usually have for the second. We are grateful to our public safety partners who will be providing enhanced coverage for both weekends this year.”

To keep the residents and visitors fully informed this Mardi Gras season, the City will provide live updates to the public about weather, traffic and general parade safety. Parade goers are encouraged to text MARDIGRAS17 to 888777 from a mobile device to receive alerts.

Mardi Gras information and updates are also available on the City’s website at www.nola.gov/mardigras. The City compiled information regarding safety regulations, enforcement policies, permitting information and helpful suggestions, including interactive parade maps, in one location so that residents and visitors can be better prepared before heading out to the parades

The New Orleans Police Department will have officers staffed at 100 percent capacity throughout the city during the 2017 Mardi Gras season. They will be complemented by officers from the Louisiana State Police as well as officers from other public safety agencies. The New Orleans Fire Department and New Orleans Emergency Medical Services will also have all hands on deck and be ready to respond in the event of an emergency.

Along parade routes, the New Orleans Health Department will be manning First Aid Stations at the following locations:

• New this year, a family rest stop will be located on St. Charles Avenue and Napoleon Avenue where parents can change diapers or breastfeed/pump in a clean, contained environment.

The New Orleans Office of Homeland Security and Emergency Preparedness will be monitoring all parade activity and coordinating with the National Weather Service and the United States Coast Guard helicopter that will be providing overhead coverage for all parades.

As was done for New Year’s Eve and past Mardi Gras seasons, the NOPD will implement an exterior (soft) and an interior (hard) closure for the French Quarter for the Carnival Season.

Beginning Friday, Feb. 17 through Sunday, Feb. 19 and Wednesday, Feb. 22 until the Wednesday after Mardi Gras, March 1, at 6:00 a.m., vehicular access in the French Quarter will be more restricted and on-street parking will be limited.

• Only taxis, TNCs, limos, hotel guests, and vehicles needing to access their businesses and residences will be allowed to enter the French Quarter from Canal Street, Decatur Street, Esplanade Avenue and Rampart Street.

• The 100-800 blocks of Bourbon Street will be a pedestrian mall. Vehicles will not be able to cross Bourbon St., and will be detoured at all points along Dauphine and Royal Streets.

• Motorists should be prepared for heavy pedestrian and vehicular traffic as security measures are being increased.

Construction along Napoleon Avenue is now complete and will be fully accessible for the 2017 Mardi Gras season.

The SELA project on Napoleon Avenue included excavating the existing roadway and neutral ground and installing large underground drainage canals and large drain lines to improve the capacity of the major drainage system.

TAXI STANDS AND TRANSPORTATION NETWORK COMPANIES FOR ALL STAR GAME

From Friday, Feb., 17 through Sunday, Feb., 19, a temporary taxi stand will be located Lakebound on the 1400 and 1500 blocks of Poydras Street. Transportation Network Companies (TNCs) i.e. Uber, Lyft will be routed to Perdido Street where they will have access to Tulane Avenue or Loyola Avenue.

All taxis and TNCs will be allowed in the French Quarter during the soft closure. No one will be allowed to cross the hard closure from 5:00 p.m. to 5:00 a.m., Friday through Sunday.

In addition to permanent no parking signs posted along parade routes, the city will install approximately 3,000 temporary signs. Drivers are encouraged to pay close attention when parking to avoid being ticketed or towed.

Two hours prior to the scheduled start of each Mardi Gras parade, any unauthorized vehicle on any part of the published parade route will be ticketed and towed.

Parking is prohibited on either side of the following streets two hours before and after parades:

• Napoleon Avenue between Tchoupitoulas Street and S. Claiborne Avenue; and

This will ensure public safety and facilitate the flow of the Carnival krewes (violations result in a $75 fine and seizure).

Two hours after a Mardi Gras parade ends, any unauthorized vehicle on any part of the published parade route will be ticketed and towed. This is done to keep the route clear so that it can be cleaned by the City’s Department of Sanitation (violations result in a $75 fine and seizure).

Beginning the Friday before Mardi Gras, Feb. 24, at 6:00 p.m. until the Wednesday after Mardi Gras, March 1, at 6:00 a.m., no on-street parking is allowed and no vehicular traffic except those with issued permits are allowed into the French Quarter between Iberville Street, N. Rampart Street, Dumaine Street and Decatur Street ($50 fine and seizure).

Crews will be towing on all cross streets of Bourbon Street during the events, including the 700-800 blocks of Iberville Street, St. Ann Street and the 700 block of Royal Street.

Parking of recreational vehicles, campers and oversized vehicles is prohibited in residential areas. It is strictly enforced during the Mardi Gras season particularly in the Central Business District, Warehouse District and Garden District.

Before, during and after the parades, the city will extend enforcement efforts into the neighborhoods adjacent to the published parade routes. This will minimize non-residential intrusion. Parking officers will primarily enforce the following safety violations:

• Parking within 20 feet of a crosswalk, intersection, or stop sign ($40 fine)

• Parking on a traveled portion of the roadway ($40 fine)

• Parking on the neutral ground and subject to seizure ($75 fine)

• Parking in a handicapped zone without proper permit displayed ($500 fine)

• Parking in the wrong direction (vehicles must park in the direction of travel on one way streets, and with the right wheel to the curb on two way streets) ($40 fine)

• Vehicles that have unpaid parking tickets will be booted and/or towed.

For more information on parking enforcement, citizens may call:

The city’s neutral grounds are the direct responsibility of the Department of Parks and Parkways; therefore, any prohibited items that are placed on the neutral grounds will be removed and disposed of immediately.

The following rules are being enforced:

• All ladders used by parade spectators shall be structurally sound. No ladder, chairs, ice chests, chaise lounges, barbecue grills, and other similar personal effects shall be placed in intersections or between curbs of public streets during a parade.

• Ladders, tents, grills and other personal effects shall be placed six feet back from the street curb.

• Fastening two or more ladders together is prohibited.

• Roping off areas of the neutral ground, public sidewalks, or other public property is prohibited.

• No structures can be erected (i.e. viewing stands, bleachers) without a permit. The only allowed structures are those that are provided by the City Of New Orleans in city designated areas or those on privately owned properties that have been granted permission and issued permits by the city’s Department of Safety and Permits.

• No bulky furniture can be placed on neutral grounds.

• Please stand behind the barricades when they are placed along streets while the parade is passing.

• Please do not run between floats or vehicles while the parade is in progress.

• Ladders should not be placed in the street or be tied together and should be placed back six feet from the curb.

• Parade viewers may not throw any object at any participant in a Carnival parade. Violation of this provision includes a $250 fine per violation.

• Please do not stand or walk close to heavy equipment used in the clean-up process.

• Items such as sofas and tents should not be placed on neutral grounds.

The Department of Sanitation is responsible for cleaning the streets, neutral grounds and sidewalks after parades held on both sides of the Mississippi River in the city of New Orleans.

Up to 600 city workers, temporary workers, contracted employees and 87 pieces of equipment may be utilized each day in clean-up efforts.

The success of Mardi Gras depends upon returning public rights of ways to normalcy and cleanliness as soon as possible after each parade. In order for this to occur efficiently and effectively, cooperation from the public in following restrictions on parking along parade routes and the placement of items such as ladders, tarps, and furniture on neutral grounds is vital.

Vehicular traffic will be restricted until clean-up crews have passed for the safety of the workers and the general public.

The city encourages everyone to dispose of litter in public litter containers or bring their own trash bags.

City of New Orleans Bureau of Revenue field agents and collectors will be canvassing neighborhoods in and around parade routes to ensure businesses (including ABOs) and vendors are properly permitted. Additionally, residents or businesses charging for parking at commercial properties must be properly permitted. 501c3 organizations may apply for a lower fee schedule associated with the appropriate permits.

The sale of silly string, snap pops, and stink bombs is prohibited. Bureau of Revenue field agents and collectors will confiscate any snap pops found on mobile vendors.

Unless a Food Truck Permit holder also obtained a Mardi Gras Fixed Location Vendor permit, no food trucks are allowed within two blocks of a parade route, from two hours before the parade starts until two hours after the parade has passed any part of the route.

For information about obtaining a Mardi Gras walker permit

Individuals interested in obtaining Mardi Gras Walker Permit to sell novelties or pre-packaged food without a fixed location can go to the Revenue office located at 1300 Perdido St., Room 1W15, during the week of Feb. 4 to get the necessary permits. 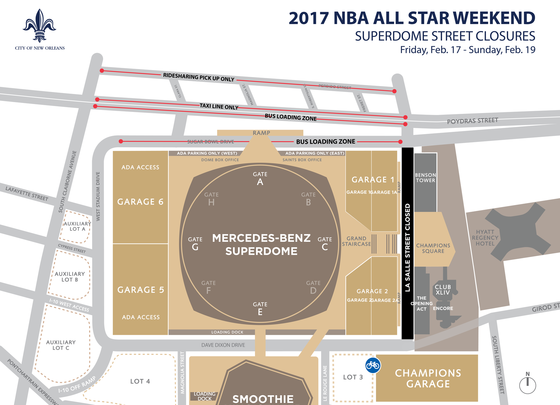