PORTS TO THE POWER OF ONE

It’s 9:30 a.m., on a typical Tuesday morning. Like many days, Gary LaGrange is mid-sentence in the middle of a story, this one about the genesis of the Ports Association of Louisiana, the advocacy group of which he’s the executive director.

Able to paint a picture without picking up a brush, LaGrange gives color and life to what you’d expect to be a beige tale. Even more impressive, while doing that he expertly stays on message.

That’s the reason the Ports Association of Louisiana was formed 33 years ago – to stay on message.

“You look at us back in the beginning, we were a bunch of young ragtag collection of port directors, but we all figured out that there would be power in our numbers,” says LaGrange, the 40-year maritime industry veteran and recently retired CEO of the Port of New Orleans. “Separately our message might get lost, forgotten or even convoluted. But unified, we’d be on point and clear.

“And that’s what we do: represent all the ports in a unified effort from the legislative standpoint, function standpoint and an operational standpoint.”

LaGrange continues. “And we found out that works better than meeting each other head-on in a combative mode when we go to Baton Rouge and try to accomplish anything we need to accomplish — things important to the overall health of the industry.” 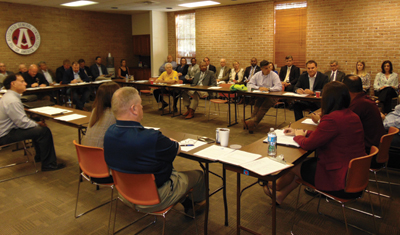 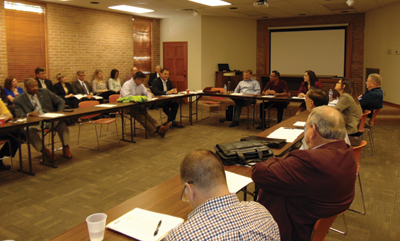 Each month, port directors, or their representatives, along with associate members attend a Ports Association of Louisiana meeting to discuss issues involving the maritime industry.

All 32 Louisiana ports (a mix of deep-draft, coastal, inland and developing ports) represent the core membership of the Ports Association, but not exclusively. Other members include both businesses within the maritime industry and those that support it indirectly such as consulting firms, shipping agencies, river pilots associations, construction companies, railroads, and government agencies like the Department of Transportation & Development, Department of Economic Development, Department of Treasury and the Office of the Lieutenant Governor. LaGrange says the variety of representation within the Ports Association’s membership speaks to the impact maritime commerce has on both a micro and macro level.

“You look at ports like the Port of New Orleans and the Port of South Louisiana…those aren’t city ports, those aren’t even state or regional ports, those are Ports of National Significance,” LaGrange says. “The beneficial geographic location of these ports, and all the ports in Louisiana, and the jobs they help create or support, makes issues involving the ports issues that are important to the entire local community and country.”

From the time the Ports Association was founded up to the present day, its overall missions haven’t changed much, even though the way ports do business has certainly transformed with technological advancements over the last three decades.

The Ports Association formulates common positions on policies or potential legislation that affects its industry, enabling them to deliver a unified viewpoint when meeting with lawmakers and influencers. The organization also tries to initiate measures that benefit the entire membership to intergovernmental entities, promotes a positive image of the ports in print, TV and other electronic media, and it promotes academic research and educational interest in the ports and marine sectors – all of which makes sense.

What’s a little surprising, though, is the healthy environment the Association has nurtured between the Louisiana ports to freely exchange information, new techniques and/or technologies relating to development, logistical organization, administrative practices and overall management. 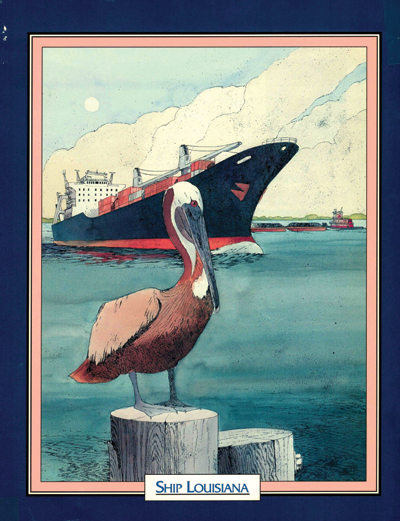 “Ever since 1984, when our organization was created, there are no secrets anymore,” LaGrange says. “We’re a family — that’s the best word I can think of — and as a family we tend to share information and ideas, even if it’s with a competing port. Because in Louisiana, the competition is minimal, there’s maybe a small overlap, but that’s very, very minimal. For an example, a lot of people think a place like Houston would be a big competitor with the Louisiana Mississippi River ports. That’s just not true.

“So at the end of the day, that environment allows us to all work together, to share ideas, and that’s something we do freely when we meet once a month.”
Currently, the Ports Association is waving the flag for a variety of front-burner issues improving public works projects like widening access roads and connectors from the Ports to nearby highways. Funding for those improvements would come from a bill proposed earlier this year that would impose a 17-cent tax per gallon on fuel in Louisiana, thus raising more than $500 million annually for roads, bridges, ports and waterways and multimodal infrastructure projects.

The Ports Association also continues to speak about the importance of continued dredging efforts in the lower Mississippi River.

“That’s priority number one,” LaGrange says. “You can have all the money in the world to build cranes, and new docks, and rail spurs and all these wonderful things. But if you can’t get to these things so you can utilize them, well, guess what? You’re out of business. So dredging is our No. 1 priority, no doubt about it.

“There will always be things to improve upon, issues that affect our ports in Louisiana,” LaGrange said, later.” And when we organize as one entity — all together, as important as this port system is to the economy and to national security and national interest — then that’s just a great platform on which to stand and let your voice be heard.” For more information contact Candace Griffin, Association Manager at 225-334-9040.