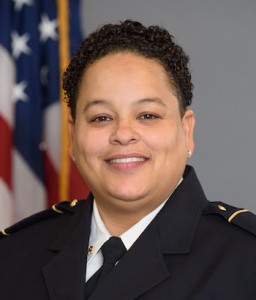 NEW ORLEANS — The Port of New Orleans (Port NOLA) has named Melanie Montroll as the next chief of its Harbor Police Department following a national search. She is a 21-year veteran of the force and will be the first woman to serve in that role. Montroll — who is the department’s assistant chief — will succeed Chief Robert Hecker, who will retire after having led HPD for more than 26 years.

“The Port, our tenants and the region rely on our strong, ethical, and professional Harbor Police Department,” said Brandy D. Christian, Port NOLA president and CEO. “Assistant Chief Montroll has progressed through the leadership ranks of HPD and the law enforcement community due to her work ethic, integrity and commitment to the community and the maritime industry. She brings the experience and leadership qualities necessary to accomplish her goals of recruiting, retaining and continuing to train an exemplary and progressive law enforcement agency uniquely specialized in maritime and homeland security.”

Montroll has served as HPD’s assistant chief since 2017. She is a second-generation police officer, following in the footsteps of her father who also served with Port NOLA HPD. Since her graduation from the Harbor Police Department Police Academy, she has been regularly recognized for her leadership skills and steadily progressed through the ranks.

“It is my true honor and privilege to serve the Harbor Police Department and our community,” she said. “I look forward to leading our already outstanding department and pledge to work tirelessly to ensure that HPD is a shining star in our beloved state of Louisiana and a model for law enforcement agencies.”

Montroll’s top priorities will be recruitment and retention of the best qualified candidates who share in HPD’s mission to protect and serve the maritime and community interests within the Port’s three-parish jurisdiction of Jefferson, Orleans and St. Bernard. She plans to continue HPD’s commitment to diversity, community engagement and homeland security, as well as implementing the latest technology and training.

Montroll is a member of the Louisiana Association of Chiefs of Police, International Association of Chiefs of Police and the National Organizations of Black Law Enforcement Executives. She is a graduate of the FBI Leeda Leadership Trilogy program. She is also a member of the New Orleans Regional Leadership Institute class of 2022. She earned an MBA from the University of New Orleans along with a bachelor’s degree in business administration, and she is a graduate of the School of Police Staff and Command at Northwestern University. She is a Louisiana native and lives in the greater New Orleans area with her wife and teenage son.

Chief Hecker, who retires after leading HPD since 1995, began his career in law enforcement with the New Orleans Police Department. Throughout his law enforcement career, he has been presented three “Keys to the City,” three Medal of Merit awards, 14 Letters of Commendation, a Supervisor of the Year award, and broad recognition for leading HPD’s Hurricane Katrina Disaster efforts, including Gambit Weekly’s 2005 New Orleanian of the Year. Hecker was most recently named Maritime Humanitarian of the Year in 2020 by Global Maritime Ministries.

“Over 26-plus years of leadership, Chief Hecker transformed the Harbor Police Department into a respected force known for its integrity, high standards, and service,” said Christian. “On behalf of the entire Port community, we congratulate him on a well-deserved retirement.”

Montroll will be promoted during a swearing in ceremony on March 24 at the Port of New Orleans Administration Building following the monthly board meeting.