Port NOLA builds on success with a change at the helm

Gary LaGrange’s life and work are guided by lessons learned through athletics. Whether it’s teamwork, leadership or clutch performances, LaGrange pays homage to those lessons often in conversation and in professional settings.

LaGrange devoted much of his professional life to the port and maritime industry, leading four different ports in four decades.

LaGrange began his tenure at the Port Sept. 10, 2001, and weathered several crisis early on, including new security measures in the wake of the 9/11 terrorist attacks, federal tariffs on imported steel in 2002 and the landfall of Hurricane Katrina in 2005.

His early experience coaching high school football in his hometown of Franklin, Louisiana, aided in LaGrange’s most trying time as a professional: Reopening the Port of New Orleans just 12 days after Katrina hit and leading the reconstruction of the Port’s infrastructure.

“It was a tremendously gratifying feeling of teamwork,” LaGrange said. “If we had been playing football instead of running a port, we’d have won the Super Bowl in my opinion. Our team and coaches were second to none.”

It was almost 1,500 miles from New Orleans when LaGrange began to understand what New Orleans’ recovery meant to others around the country. On the evening of Sept. 25, 2006, LaGrange was in Rhode Island to deliver a speech on the city and Port’s recovery. He watched his New Orleans Saints return to the Louisiana Superdome against the rival Atlanta Falcons at a local sports bar. After forcing the Falcons to punt on their first series, safety Steve Gleason burst through the Atlanta line to block a punt with the Saints recovering in the end zone.

“I was surrounded by New England Patriots fans in this sports bar and they all cheered when Gleason blocked the punt,” LaGrange remembered. “I said ‘But y’all are Patriots fans’ and the bartender responded ‘Honey, tonight we’re all pulling for the Saints.’ That moment really changed everything and gave the city and its people their swagger back. That emotion was passed on to the city, the state and the Port. As unfortunate as we were with what had happened with the storm, we were very fortunate we had a lot of people who loved us both personally and politically.”

“I had the privilege to work alongside Gary as a member of the Board just after Katrina,” Gibbs said. “Gary was a visionary for the needs of the Port. He exemplified true leadership through some of the most difficult times in Port history. The foundation he laid during his tenure has been paying dividends for the past several years as the Port has recorded record years of growth and prosperity. His leadership was outstanding, his stewardship was proven, and more importantly, his friendship was loyal and true.”

“Anyone who has met Gary has been warmed by his gregarious persona and engaging personality,” Fay said. “With those traits, Gary developed many relationships with the international shipping community and drew many tenants and customers to the Port.”

Fay said LaGrange never took his eyes off the “prize,” which was how the Port could maximize job opportunities for the region.

“Many of those business associates, whether they lease property, operate ships or own or haul cargo, now call Gary a friend,” Fay said. “Those relationships were, and will continue to be, good business for the Port.”

Former Board Chair Conrad Appel, now a Louisiana State Senator, said, “Gary really helped to bring the Port of New Orleans into the 21st Century. His leadership as CEO resulted in the modern and efficient operation we have today.”

The Port’s recovery and the diversification into a multi-faceted port operation sit atop LaGrange’s list of accomplishments.

“We focused on growing our container operations, growing our cruise market and transforming our industrial properties into a transportation and logistics hub, attracting value-added services and new markets for Port cargo,” LaGrange said.

Today, the Port is the sixth-largest cruise port in the United States, fosters a growing industrial base, has set back-to-back container cargo records and was recognized as the top port for operations and logistics in America.

“The diversification of our cargo portfolio aided the Port through some rough times and kept cargo numbers growing throughout the global recession, despite other ports reflecting pretty large losses,” LaGrange said.

Under LaGrange’s tenure, the Port invested more than $500 million in infrastructure improvements in container, intermodal, cruise and refrigerated cargo operations. Those projects included the more than doubling of container capacity at the Napoleon Avenue Container Terminal, construction of two new cruise ship terminals at the Erato and Julia Street wharfs, completion of the new Mississippi River Intermodal Terminal and the opening of a state-of-the-art blast-freeze warehouse.

A visible and vocal proponent of the port and maritime industry, LaGrange served as Chairman of the American Association of Port Authorities, Gulf Intracoastal Canal Association and President of the National Waterways Conference. A member of the National Rivers Hall of Fame and the International Maritime Association Hall of Fame at the United Nations, LaGrange is active on many other industry boards. He served on the board of the Gulf Ports Association of the Americas, the Federal Reserve Bank Advisory Council on Trade and Transportation and the U.S. Department of Transportation Maritime Administration’s Port Subcommittee.

LaGrange has been named the “Man of Steel” by the American Institute for International Steel and Maritime Person of the Year by the Propeller Club. He is the recipient of the Eugene Schreiber Award from the World Trade Center of Greater New Orleans and the C. Alvin Bertel Award in recognition for outstanding contributions to the advancement of the Greater New Orleans port area.

He is also a founder and past-president of the Ports Association of Louisiana (PAL), the Bayou State’s leading port advocacy group, which LaGrange will assume leadership of in April 2017.

“Gary is the foremost authority on the port industry and has helped grow the industry and the Port of New Orleans to where it is today,” said Accardo.

Kurt Nagle, President of the American Association of Port Authorities said: “Gary is universally admired, respected, and frankly, loved by his colleagues for his dedication to his port, the industry, and AAPA. Through his style and personality, he helped strengthen relationships among ports throughout the western hemisphere, share lessons learned and advance critical industry issues.”

Chett Chiasson, Executive Director of the Greater Lafourche Port Commission and former President of PAL, said LaGrange helped to guide him in his career.

“Gary has been a great mentor since I started in the port business in 2005,” Chiasson said. “His knowledge and friendship were invaluable to me as I became a port director and continues today.”

As LaGrange assumes his new role, he predicts great things on the horizon for the Port.

“I see the sun, the sky and the moon for the Port of New Orleans,” he said. “I have all the high hopes in the world for the Port’s future. We are America’s most intermodal port.”

His memories of the Port will be its people and his team, LaGrange added.

“The comradery, the staff, the people, really,” he said. “The people there wear the Port of New Orleans on their sleeve. Honest, dedicated people who fly above the radar and do things honestly and transparently. The Port’s success is a tribute to them.” 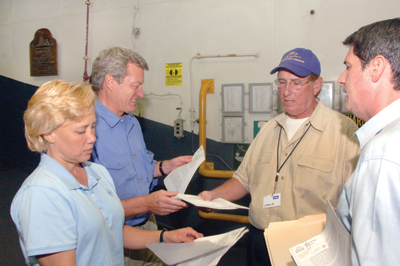 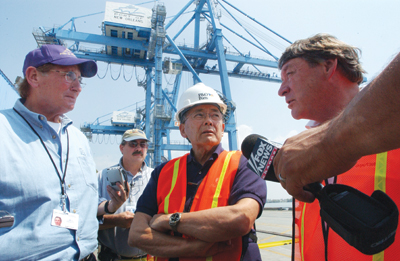 Journalists from national and international media outlets arrived in New Orleans after Hurricane Katrina to report on cargo operations, often interviewing then-Port NOLA President and CEO Gary LaGrange. Pictured in the foreground from left: LaGrange; then-U.S. Sec. of Transportation Norman Mineta; and then-Chairman of the Board of Commissioners of Port of New Orleans Angus Cooper.