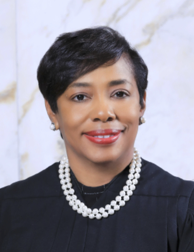 Pittman is a New Orleans native who has been serving as the Judge in Orleans Parish Criminal District Court Section F since January 2009. She has served for the last two years as Deputy Chief Judge. She was recently appointed to the Louisiana District Judges Association Executive Board and also appointed by the Louisiana Supreme Court to the Judiciary Commission of Louisiana. She previously served on the Louisiana Judicial College Board of Governors and the Supreme Court Committee on Judicial Ethics.

“I am honored that I have the opportunity to become Chief Judge. I am committed to ensuring that Orleans Parish Criminal District Court continues to run in an organized, efficient and effective manner. I am looking forward to continuing to give back to the community that has given so much to me,” said Pittman.