New Orleans’ only female-run commercial moving company is racking up the accolades, in part because of their focus on sustainable practices.

A team of big burly men is what most people have in mind when it comes to seeking help for an office move. Such is not the case with Bart’s Office Moving, a female-run commercial moving company.

At Bart’s helm sits four close-knit sisters who, along with their mother, have developed a reputation in their industry not only for performance and customer service, but sustainability and giving back to their community.

It’s been a big year already for the 38-year-old company, headquartered at 2540 Industry Street in New Orleans. Bart’s took home this year’s LifeCity Green Games People’s Choice Award, the Emerging Leadership Award for Building and Energy Services and was named Small Business of the Week by the U.S. Senate Committee on Small Business and Entrepreneurship.

First-born daughter to founder Bart Thibodeaux, CEO Courtney Davis-Herbert joined the family business six years ago and has since successfully overseen Bart’s expansion from five to 30 employees while increasing service throughout South Louisiana.

Biz New Orleans: What led you on the path to sustainability?

Courtney Davis-Herbert: It’s one thing having an appreciation for environmentalism and another to actually implement it as a business practice.

Sustainability is not always easy and it’s not always as cost effective, so for you to truly stay on that path it has to be something you feel passionate about. When we were younger, our father drilled it into us — this is our only world. The one world that we have to live in. If he saw a bottle or anything that he knew he could recycle he would take it and make sure that it ended up in its proper place. For us to get spending money we would have to go outside and crush cans. It was just a way for him to show us that it took hard work to really get whatever it is that you want in life, but also it takes hard work to make sure that you’re doing what’s right for your community. 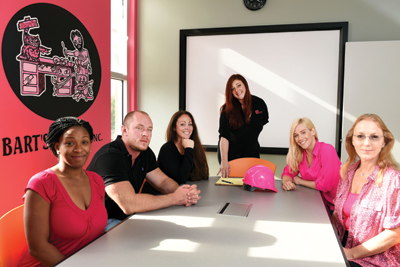 Biz: What advice would you give to companies that may want to pursue a more sustainable route, but are on the fence due to lack of information or concerns about cost?

CD: Along the lines of it being maybe not cost effective, there is still a cost and that cost is the future. So you have to look at the bigger picture and not just the quarters and dimes that you might be spending. I strongly recommend reaching out to companies like LifeCity. They’ll do an assessment and see ways that they can help you with saving money while still being green. They’ll also figure out ways that maybe it doesn’t cost you anything at all.

Biz: There are several charities that you can donate to when you are pursuing a sustainable route. Why did you choose schools and Habitat for Humanity?

CD: We chose schools that my daughter and my [nieces] go to. When we were younger, my father always donated to the schools that we attended. It was quick and easy. That’s not to say that if a school reached out to us and said,  “Hey look these are what our needs are,” we wouldn’t definitely make a huge effort to try to figure out how we can help them.

Habitat for Humanity happened to be just around the corner from us. One day Ashley [Herbert] realized that they were there and we gave them a call. We had a truck load of furniture we were trying to get rid of. We didn’t want it to end up in a landfill. Before then, we would try a resale but then it got to the point that our warehouse, because our business has grown so much, did not have the storage capability that we had in the past. We were also breaking down furniture and just recycling. But then we felt guilty because this is furniture that maybe isn’t right for the customer who had it previously, but it didn’t mean that there wasn’t someone else out there who couldn’t put it to good use.

When the guys come back with a truck load of furniture they know now that their first stop is Habitat for Humanity. Not only are we keeping it out of landfill but now we’re helping to build homes for people in need.

“Once we get in there and start working, that’s when they realize that these girls got it going on.”

Biz: What led to your company’s expansion, particularly since some companies don’t survive one?

CD: The driving force behind it was we looked at our community and ways to help.

It’s not just about sustainability; It’s also about people in that community and feeding their families.

Growth is extremely painful and as much as business owners want it, when it finally happens, there is a point in time when you’re like, “What did I just get myself into?” The great thing is the fact that we are a family business and so I had at least three other people that I can turn to to keep ourselves as sane as possible.

Biz: How does it feel to work with such close family members? Would you advise others to do the same?

CD: It truly depends. We’re a close knit family. When we were younger our parents always told us that we always have to look out for each other.

That’s not to say that we didn’t have our arguments. But I will say that I feel like growing up in that manner knowing that at the end of the day we were there for each other has really helped us in our business lives. I believe that being a family owned business makes us stronger. We have five owners — me, my mother and my three sisters — with the same mindset. And I hate to ever put out there the differences between men and women, but what I will say is that sometimes our egos aren’t as large and we know that in order for us to be successful we have to put egos aside when we come through the door, which is probably hardest for me because I’m the oldest and I’ve been bossing them around, or at least trying to, for a very long time.

Biz: What unique challenges have you encountered as a female-run company in a male dominated industry?

The biggest is when we’re out on a job and the customer is trying to “help” us.  They’re trying to put their hands on the furniture. They think that, “Oh I have to help this woman who is trying to move these items.”  Our youngest sister especially, who is 25, Alexie, basically tells the customer please step out of a way. I know what I am doing here and you’re kind of getting in the middle of things.

Another, is that sometimes customers feel that because we are woman owned that maybe we’re not as capable. But once we get in there and start working, that’s when they realize that these girls got it going on. And if there is an item that is a little bit too heavy or cumbersome we have other crew there to help. And even the crew will tell you that they are impressed with Alexie, who will grab a piece of furniture and she gets it out the door. She doesn’t even think twice. She makes it happen. 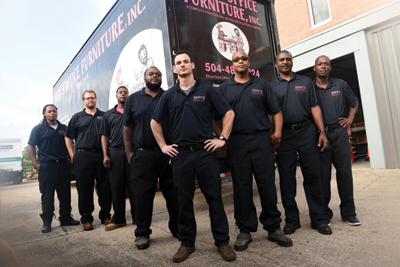 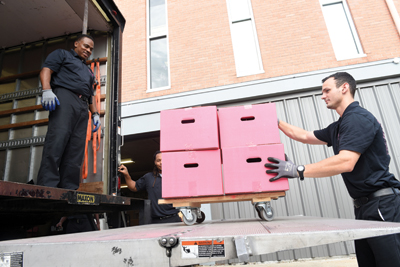 Biz: Was it a smooth transition back to the company after college?

CD: I didn’t come back after college. I took the long way.

[My father] started the company in August 1978, which was the month that I was born. At that point, he kept on trying for a boy. He just thought that he was going to have a boy and he would take over. [My father] kept on trying and they kept having girls.

Through all of that, my father developed a chronic liver disease and so we knew at some point he was going to have a transplant. Growing up he always showed us the ropes, how the company was run. He didn’t treat us like little princesses. I cut the grass. Every single weekend I was out there with a little push lawn mower. We played every single sport imaginable. He made us understand that we were capable of so much more than maybe what we were told outside of our homes.

He had his first liver transplant about 16 years ago. At that time I had just started my career with Planet Beach and I ended up being one of their youngest franchisees. I was also a general manager for Raising Cane’s. So those opportunities gave me a real view of how corporations are run.

At that time, Ashley was instrumental in making sure that we actually had a business. When he was in the hospital she was out running jobs. She made sure that operations stayed sound while my mother was running the office. My mother ended up having to get a job with the government because their health insurance got too high, so my sister Kasie took over while Ashley was out in the field. So about six years ago is when I finally came [to Bart’s]. They had seen what I had done for other companies, and they had been asking for me to provide that sort of service for them. But I really didn’t understand what my role would be. I knew that Ashley was handling everything and she was doing it very well.

After many late-night conversations with Ashley, I finally agreed to come on board. What I was able to bring to the table, which is something you don’t normally see in a family-run business, is that we run like a corporate office. We don’t run like a mom-and-pop. But on the other end, if you ask my employees they feel like it’s a family business. If they have a problem we have a problem. So if I can help them in any way shape or form, help them manage outside issues, I am more than happy to do that. So it’s the best of both worlds where everything is run like a well-oiled machine and has that family feel for our employees’ sake.

Biz: With the success of your company, do you think your father still wants a boy?

CD: My father is definitely very grateful that he has four girls, and that every single one of us has now come into the family business and that we are doing everything that we need to do to make sure that the business stays successful. This company is his namesake. He really gave us an amazing opportunity for our life by starting this company and we’re grateful.