Peggy Scott Laborde is a colorful New Orleans celebrity with a colorful style. The always-smiling senior producer/host of WYES-TV, Peggy has produced over 40 documentaries and been the host of “Steppin’ Out,” a unique “show and tell” weekly program covering what’s happening on the local arts, entertainment and dining scene, for 29 years. “I like wearing colorful clothes because I think they are cheery, and jewel tones tend to be more flattering with my pale skin,” Peggy says.

Blessed with a natural beauty, Peggy’s long career at WYES began 33 years ago, including stints working for WDSU and WLAE television stations. A little known fact is that she began her career – after graduating from the University of New Orleans with a bachelor’s degree in political science – as a reporter for The Orleans Guide, a weekly newspaper. “It was a great way to start my career,” she says. “It was an excellent chance to get used to deadlines.”

Peggy’s career producing documentaries for WYES has often found her as the on-screen host, where she usually wears colorful outfits. “I feel very fortunate for the opportunity to help depict New Orleans’ more recent past in documentaries,” she says. When queried about her favorite documentary, she adds, “It is hard to choose a favorite, however, the quartet of New Orleans culinary history programs are dear to my heart and I am fond of “New Orleans Fair Grounds Memories.” Our next documentary, scheduled to air in November, concerns New Orleans’ relationship with the Mississippi River.”

Her much-watched “Steppin’ Out” show keeps Peggy ever-aware of her on-air wardrobe. “I have always felt that being on television is a privilege and that I should ‘dress up,’” she says with a smile. “I know the trend is casual but we don’t always have to follow trends.” Then for a bit of nostalgia she adds, “I still recall that my family used to dress up to go downtown to Canal Street to shop, and I guess that influenced me to have a positive attitude about dressing up. Then I worked my way through college at D.H. Homes Department Store on Canal Street where I always needed to look nice at work.” 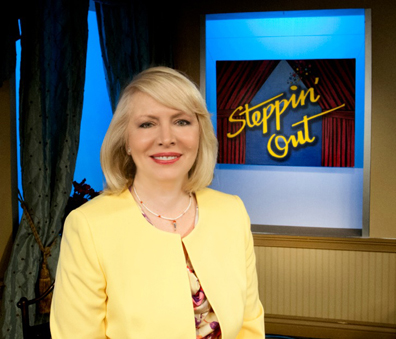 Today she is quick to give credit to Alison L. Parker, a professional stylist who works in the regional film/television production scene, for her appearance on her weekly television show – broadcast on WYES/Channel 12 on Friday evenings at 7:30 p.m. and 11 p.m. and also on demand at wyes.org. “She has expanded my fashion horizons, as did my dear friend Celeste Seymour Judell, who shared her professional styling expertise with me before she passed away in 2010,” Peggy says. As part of Peggy’s on camera style, she is almost always filmed wearing jewelry by Mignon Faget, her favorite jewelry designer, and clothes from Dillards. “I would also like for you to mention that I love wearing my beautiful hand-painted Ray Cole scarves on air. I have them in many colors and wear them often.”

“Alison is to be commended for starting a non-profit called rickRACK, Inc, that works with local neighborhood centers and after-school programs to help students create costumes for Halloween and Mardi Gras, thus teaching sewing and organization skills. Her non-profit has served as a great creative outlet in the community,” she adds.

Another much-watched annual WYES appearance is when Peggy co-hosts the broadcast of “The Rex Ball and the Meeting of the Courts of Rex and the Mistick Krewe of Comus” on Mardi Gras night. “For the past few years, Alison has helped me choose just the right dress, and for lagniappe we borrow the jewelry I wear for the show from Adler’s just for the evening.

Peggy’s love of color is also showcased in the Mid-City home she shares with her husband, Errol Laborde, executive vice- president and editor-in-chief of Renaissance Publishing. “Yes, we do have a colorful house,” she says. “The living and dining rooms are painted tourmaline green, the hall is purple (eggplant) and the stairwell is yellow/gold. I hope there is a subtlety and that guests don’t automatically notice that these are the colors of Carnival.” For added color, the couple has an outstanding collection of Carnival posters and photographs by local photographers – some of whom are friends.

Color is definitely an important part of Peggy’s life. “I still have my green wool blazer from my days at Cabrini High School,” she says. “I loved my days there, so it means a lot to me.” In New Orleans, colorful personalities are good, and being a colorful celebrity who is known for her love of color makes Peggy extra special.